Oct. 23, 2013 - To what extent can India be the next China for the B.C. forest industry? It’s a question a growing number of pundits are asking. Exporting wood to India is nothing new: almost all B.C. lumber producers sell to the emerging superpower; but as local players assess new horizons in a bid to maintain their industry’s recovery, India increasingly seems like fertile ground for major export.

But make the comparison with China to any resource analyst, and the response will be muted. “It’s just not a big enough market yet,” says Russell Taylor, president of International WOOD MARKETS Group Inc. “You’ll hear about big percentage year-over-year numbers, but from a very small base.”

Taylor goes on to say that although hemlock has been sold to India, “India is mainly a teak market: tropical timbers dominate. The big story for softwoods is radiata pine logs from New Zealand, and India has been importing up to 1.5 million cubic metres per year: sizeable volumes but at very low prices. The logs are used at sawmills for low value packaging and pallet type of materials.”

Cautious optimism tends to characterize any debate about foreign export, but as far as the newly re-elected
provincial Liberal government is concerned, the time has come to go full-out in cementing ties with India. “The growth potential is tremendous,” says Minister of Forests, Lands and Natural Resource Operations, Steve Thomson. “In fact, when I was recently reappointed to cabinet, one of the initiatives given to me by Premier Christy Clark was to develop a new and diversified wood market in India. We won’t enjoy exponential growth as we did in China, and development will definitely occur over the long term – but we’ve already made crucial inroads in establishing a framework for meaningful export and investment.”

Thomson is referring to Forestry Innovation Investment Ltd. (FII), the Liberals’ market development agency for forest products whose mission is to grow the B.C. industry by “bringing its products to the world.” Last December, FII opened an office in Mumbai beside the government’s Trade and Investment bureau. Since then, FII has embarked on regional education and promotional campaigns, and earlier this year it hosted a trade mission in which 18 B.C. forestry representatives met with architects, builders, manufacturers and government officials (the mission is said to have generated new sales of over $5 million for the B.C. industry).

Successful trade missions are one thing; creating a substantial and permanent export relationship is quite another. As it stands, the volume of wood exported to India yearly has fluctuated wildly: from 11,707 cubic metres in 2010 to 61,698 in 2011, down to 52,820 last year and only 13,239 as of April of this year, according to FII figures (the fluctuations are due to factors such as the GDP hitting the wall in 2012 and, more recently, U.S. market price improvements). SPF has overwhelmingly been the biggest commodity sold by volume (accounting for 49,101 of 2012’s 52,820 total, and 44,457 of 2011’s 61,698 total) followed by Douglas fir and hemlock.

These are hardly earthshaking numbers; so why is the government so bullish about India (whose housing material of choice is concrete and steel), and how does it plan to gain a real foothold in the market?

FII representatives couldn’t comment at the time of this writing because Victoria was in the midst of ratifying media communications policies in the wake of the May election. But a government insider who spoke to Canadian Forest Industries magazine on condition of anonymity says that “although India’s dense population mandates concrete high-rise construction, wood is used extensively in interiors and for plywood and finished products like furniture, doors and window frames. Also, as India’s economy continues to grow, it faces a horrible dilemma: its traditional sources for imported wood such as Malaysia and Burma are drying up.

In fact, trade with Burma might end altogether next year due to environmental considerations.”

The source goes on to say that FII has made considerable unheralded progress in smoothing the way for exports. “For example, its people helped resolve tariff issues that prevented western red cedar and hemlock from being exported to India. What remains, apart from educating Indian industries about the benefits of our wood, is for them to find the right mix of markets and homes for our different grades and cuts.”

As beneficial as FII’s presence in India undoubtedly is, one person in B.C.’s private sector deserves credit for single-handedly laying the groundwork that made the current export volumes and initiatives possible. Colleagues refer to him as the “Godfather of India”; he began exporting lumber to India 15 years ago when that nation wasn’t even on anyone’s radar. His name is Tom Sundher, a former hemlock mill manager who today is president and owner of Coast Clear Wood Ltd. in Surrey, B.C.

Coast Clear Wood acts as the agent to Western Forest Products and Weyerhaeuser into India, but 15 years ago, after Sundher visited relatives in India and witnessed an enormous use of wood, he couldn’t get anyone in B.C. to consider exporting to that country. “I talked to private companies and associations, and they dismissed me outright,” he says. “The provincial government informed me that India wasn’t even on their list of countries to keep an eye on.”

Sundher was stonewalled for almost a decade until he finally convinced MacMillan Bloedel to use him as an export agent. “We went to India, attended trade shows and got orders rolling,” he says. When Weyerhaeuser bought MacBlo, Sundher became their export agent.

It was Sundher, along with FII and the federal government, who managed to lift the restriction on western red cedar and hemlock four years ago. “Our botanical names for the wood weren’t correct and we needed pest assessments,” he recalls. “Once that was done we decided to perform the same service for all of our species – which is why today India can accept almost anything we grow.”

Bob Flynn, director, international timber, for RISI, has provided a comprehensive analysis of the Indian market via a new report, “2013 India’s Forest Products Industry” – a document FII is using to formulate strategies and initiatives.

Canadian Forest Industries tracked down Flynn in China to learn what he thought of B.C.’s prospects of expanding business with that nation. “Let’s first talk about the comparison between India and China,” he says. “China was the result of a convergence of factors: that country’s massive stimulus to construction in 2009-2011, which came at the same time that Canadians were desperate for an alternative to the dead U.S. lumber market, and the same time the B.C. government pushing salvage of beetle-killed timber, which resulted in a lot of low grade product that the China market was perfect for.

“Most importantly, the Canadian government and industry had been working 15-20 years to educate the Chinese about the advantages of softwood lumber, how to use it, slowly building business relationships and distribution channels. It was hardly an overnight success.”

Flynn predicts India will be very important for softwood lumber producers, “but the effort to educate and build relationships is just getting started. FII’s efforts will, I’m sure, pay dividends in another 10 to 20 years’ time. And India’s democratic system means that port development, housing programs, et cetera, all take place at a much slower pace than in China.”

That said, Flynn concedes that while growth will not be at the same pace as in China it is likely to continue for decades into the future (for the record, he forecasts that as India continues to urbanize, imports of softwood lumber will nearly triple over the next decade, but still be less than one million cubic metres).

In the meantime, China isn’t going anywhere, and the B.C. industry continues to recover. Sundher, whose company achieved $2 million in sales to India last year, knows intimately that patience and persistence will eventually yield results. “I doubt India will ever be the next China simply because China wants to be the manufacturers to the world, while India is a wood consumer,” he says. “But it’ll be a huge market nonetheless, and I’m heartened by the efforts of FII and the federal government, the latter of which may sign a free trade deal with India by the end of this year – which in turn would reduce the 14 per cent duty on our lumber and the cumulative 22 per cent surcharge by the time it gets to the Indian consumer. I think the future for us is very promising.” 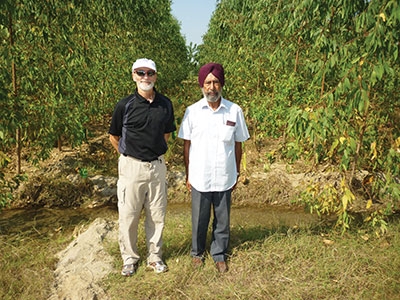 Bob Flynn with a farmer in Punjab To what extent can India be the next China for the B.C. forest industry? It’s a question a growing number of pundits are asking.
Print this page