It takes a special blend of humour and persistence to run a hardwood mill in Nova Scotia, a province whose forest sector is defined by a near blinding focus on softwoods. So you’ll find both in good measure at Groupe Savoie’s hardwood lumber mill in Westville, NS, a small town an hour north of the Halifax airport. 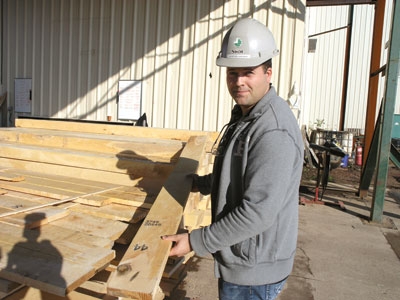 General manager Jonathan Levesque holds a board identified by the Exact Modus system. It takes a special blend of humour and persistence to run a hardwood mill in Nova Scotia 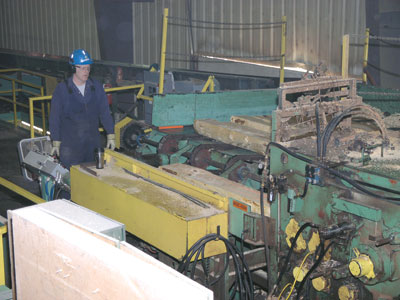 “You’re about to see one of the few sawmill museums still cutting lumber,” jokes general manager Jonathan Levesque with a wide smile as we head out to tour the mill. Not that the young sawmiller is making any apologies – The mill may have some classic equipment, but it is well maintained, and produces. Nor is it a small operation, as Groupe Savoie runs the province’s largest hardwood mill, consuming over 50% of Nova Scotia’s available hardwood sawlogs. Finally, neither Levesque nor Groupe Savoie are strangers to high-tech, high-production sawmilling. The manager got his start at the company’s head office in Saint Quentin, NB. There, Groupe Savoie runs a diversified, larger-scale hardwood operation that produces everything from hardwood lumber and components, to pallets and bioenergy, all in modern, automated plants. Similar things could be happening here too, says an ever optimistic Levesque. The difference is the availability of timber.

“Some 95% of our supply comes from private land and the balance from Crown, but there is not the same understanding of the value of hardwood sawlogs as in New Brunswick. The history is not here, and the focus is all softwood. So you get what you get, when you get it, and that’s about it.” He admits there are complicating factors, such as existing pulp wood agreements. Still, with the right attitude, a better understanding of the value potential, and a little leadership by government, he is confident that “we could extract a lot more value from the resource we have here, and create a lot more employment.”

Timber Limits
For now, however, Levesque must deal with the cards in his hand. The mill was built in 1998/9 mostly from a collection of used equipment. But while the “museum” mill may have a few old beauties, like a 40-year-old Prescott resaw, the layout, production flow, and hourly production would be familiar to most hardwood sawmillers.

It’s a two-line mill using a circular twin-saw for low grade logs, and a headrig for the higher value logs. The mill tries to send as much wood as possible through the headrig, but with 60% of the supply being lower grade material, and the headrig an older single cut, a large portion of the logs still run through the manually fed twin saw. Primary breakdown is followed by the Prescott resaw, as well as a Valley Machine Works bull edger with guided saws and Pac Hoe lubrication system. The Valley edger was the only piece of new gear added when the mill was built, and while smaller than most hardwood units, it does a nice job, Levesque says.

“If you maintain it, it’ll put out a lot of wood.” He has similar praise for an older Forano (USNR) board edger. “It’s a good machine. Like a lot of the gear, we put a lot of effort into maintenance, so it runs well.”

After secondary breakdown, lumber goes to a simple Canadian trimmer and two graders assisted by an Exact Modus tally, printing, and grader assist system. This is one of a handful of investments made to the mill in recent years, and is one that has paid off. It uses ScanMeg laser scanning to read board thickness/width, while limit switches handle length data. This info is then mated to a manual grade decision made on each board, and a product sort is selected based on this information and existing order files.

“This lets the grader focus on the defects, and then they assign a grade. The system has the length and width, and stamps both sets of info on the board, plus a pile number, which makes it foolproof for the stacking line. Also we can change products in the computer easily, so we can target a certain product. Say a client now wants 2 common, 6 inch, 7 ft. I get into the program, and can have a bundle with only that, along with the product info, and it’s done.”

The system was installed in early 2006, and has worked well. Aside from keeping better track of inventory and eliminating human errors in sorting, it allows the mill to quickly adapt to new orders from both external clients and its operations in New Brunswick, for which it supplies pallet stock among other things.

“Clients today are getting pickier. They don’t want random length or width hardwood anymore. If they’ll get a better yield with a certain size, they’ll ask for it specifically. It’s a plus for us that we can use the system to create and handle those sorts automatically, and change quickly.” The mill also saves on manpower, as there is no need for someone to run a tally.

The mill has also recently invested in its drying operations, buying a used WSAB kiln and an FEI-Wellons wood-fired boiler. It was a project they never could have justified with new equipment, but some very attractive pricing from a closed plant made it enticing even with the mill’s lower volumes.

These are the kinds of efficiencies Levesque says the mill needs throughout the operations, yet barring other fire sales, future investment will depend largely on volume. “In 2006, we produced 14 million bdft, but in 2007, with the market and wood supply, we ended near 11 million bdft. Yet we could go to 25 million bdft tomorrow if we had the wood, with the same mill. That would obviously make a huge difference in unit cost and efficiency.”

And that, he adds, would allow the mill to invest in the long list of valid projects it has on the drawing board. These include everything from optimizing, automating, and generally modernizing the two production lines, to creating a hardwood production “park” similar to that in Saint Quentin, complete with new bioenergy options. But investment of that sort will depend on access to a steady stream of hardwood timber.

“We managed to get 60,000 m3 last year, and ran mostly a single-shift operation. You just can’t get a decent ROI from that. Our best year we managed to source 78,000 m3, and ran almost four months on double shift, and that’s what we have to do more of to build a foundation for growth and long-term survival. It’s okay to run a single shift if all you saw are high quality logs, but that’s not the reality here. At least 60% of our supply is low grade wood, and with that you have to be fast and cost-efficient. To do that, we need to invest in automation and optimization, and better recovery equipment. And for that, we need volume,” he adds with a smile.

It’s a catch-22 that the survivors at Groupe Savoie Westville hope can be resolved sooner rather than later.