Industry News News
Editorial: Industry is asking ‘If not wood, what?’ 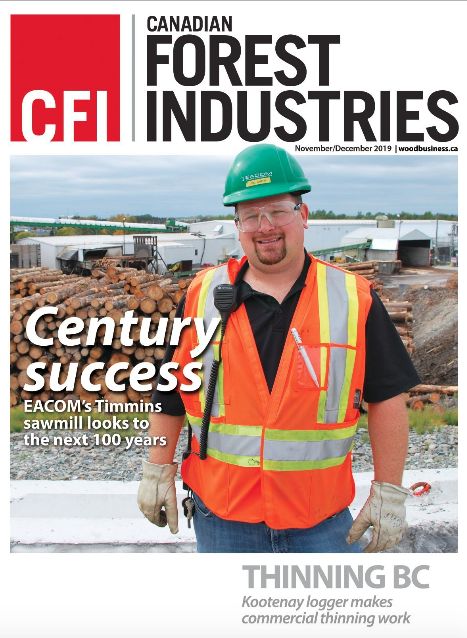 It seems to me two forestry news themes dominated headlines over the past year.

One is the increasingly worrisome state of the B.C. forest industry and the cascade of company and community impacts from mill closures. By our last count, six sawmills and two OSB mills have shuttered in B.C. since the spring, and experts predict more to come.

Many stakeholders weighed in over the past few months about how successive provincial policies have failed the industry, and what needs to happen to stem the bleed of jobs. The BC Truck Loggers Association (TLA) has been in the thick of the conversation, advocating on behalf of its members, many of whom are already experiencing financial burdens from the downturn. TLA executive director David Elstone offers another critique in CFI’s November/December issue’s Final Cut column, calling on Ottawa to stand up for B.C. forestry.

“The province’s primary industry is melting down and, aside from some funds for re-training and transition, there is little empathy for the pain and suffering of those who are so dramatically affected,” Elstone writes.

The other recurring industry headline is a much more positive one: mass timber.

Around the world, researchers, architects, builders and the media are seemingly waking up to the idea that wood is not only a safe and cost-effective material with which to build, but also provides a mitigation measure to climate change. The idea of building more, taller wood structures has graced the pages of architecture magazines, the BBC, and even The New York Times.

In an opinion column in The New York Times on Oct. 3, 2019, titled, “Let’s fill our cities with taller, wooden buildings,” the authors – Frank Lowenstein, chief conservation officer of the New England Forestry Foundation, Brian Donahue, associate professor at Brandeis University, and David Foster, director of the Harvard Forest and president of the Highstead Foundation – reference various studies by universities that confirm the environmental impact from wood buildings is notably lower than that of steel and concrete designs. “Across North America, trees stand ready to help us solve the climate crisis,” the authors wrote.

A BBC Future article on July 24, 2019 by author Tim Smedley follows the first U.K.-based architect to construct a multi-storey building with cross-laminated timber (CLT). The article explains how managing forests for the production of lumber can help countries like Canada absorb more carbon than they emit by removing mature trees susceptible to pests and wildfire. That lumber, when turned into mass timber products like CLT, can store carbon in buildings that would otherwise be constructed of high carbon-emitting concrete and steel.

Most readers will be familiar with the carbon storage capability of wood. Where we often draw a blank is what this means for Canada’s forest industry beyond our three – soon to be four with B.C.’s Kalesnikoff Lumber coming online shortly – CLT producers. We posed that question to those producers in a first-ever panel webinar on mass timber, moderated by the Canadian Wood Council’s Peter Moonen, in early October. Moonen and representatives from Structurlam, Element5 and Nordic Structures took an hour to discuss the rapid growth of the mass timber market in North America, and what that could look like in five or 10 years.

Speakers agreed mass timber is expected to have a sizable market share in the near future due to its practicality as a building material. Momentum in Canada and the U.S. is outpacing Europe, where CLT originated, and manufacturers have been challenged to keep up with demand.

According to Moonen, the question people should be asking today isn’t, “Why wood?” but, “If not wood, what?”

What, indeed, can rival the carbon-storing, renewable natural resource that is wood? The answer, at least for now and the foreseeable future, is nothing.

If you missed the webinar, you can watch at any time for free by registering at www.tinyurl.com/y3sknar6.