May 6, 2016 - The timber receiving area of Eldorado Brasil began to use application Inflor’s mobile application to automate forwarding operations inside its wood yard processes in the courtyard. With the implementation Inflor’s mobile application for forwarding operations inside its wood yard, Eldorado Brasil will have more flexibility in its wood delivery process, since the truck driver is able to report directly in the mobile phone in which slot the wood will be discharged to be chopped into chips.

This application, through a simple and flexible interface, allows data to be informed in an offline input manner and as soon as the device gets network signal, synchronize it with the Inflor System so that the information is validated, approved and consolidated.

"When we conceived the mobility screens, we seek a format that was simple to use, making it easier to use by the truck drivers and, moreover, that would allow the follow-up of the operation. The transport and yard indicators, developed in the same period, also support the decision-making of the business", says Vivia Dom do Amaral, Solution Manager at Inflor.

For Alécio Ferreira Goncalves, woodyard coordinator of Eldorado Brasil, the automation project of forwarding operations is an important step in the wood movement process.

"This is an application via smartphone, which expedites the stock consumption information to Inflor System. It is an easy-to-use tool, even for a professional without intimacy with this type of technology", he said.

"We are using mobility in our favour, simplifying our processes and achieving greater agility in decision making for the operation,” added Rolisson Fria, Eldorado systems engineer.

About Eldorado Brasil
Eldorado Brasil is one of the most modern and competitive pulp companies in the world.Its differentials lie in having its own forests that are certified by the Forest Stewardship Council (FSC), its own energy generation from biomass, the reuse of resources, and an innovative, competitive and low-carbon logistics model. It also promotes social and economic development in the communities it operates in.
With an investment of R$6.2 billion, it was built in record time and began operating in late 2012. Its industrial and forest base are located in Mato Grosso do Sul and it has a nursery in São Paulo, with a production capacity of 35 million seedlings a year. It distributes its pulp to Brazil and the rest of the world. http://www.eldoradobrasil.com.br/ 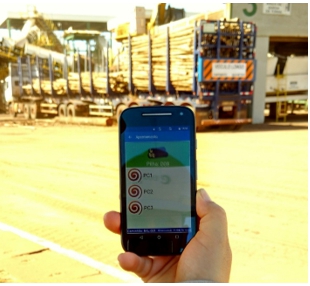 Related
Looking Forward Through 2012
Are We There Yet?
Tough Get Going
Mixed Reviews