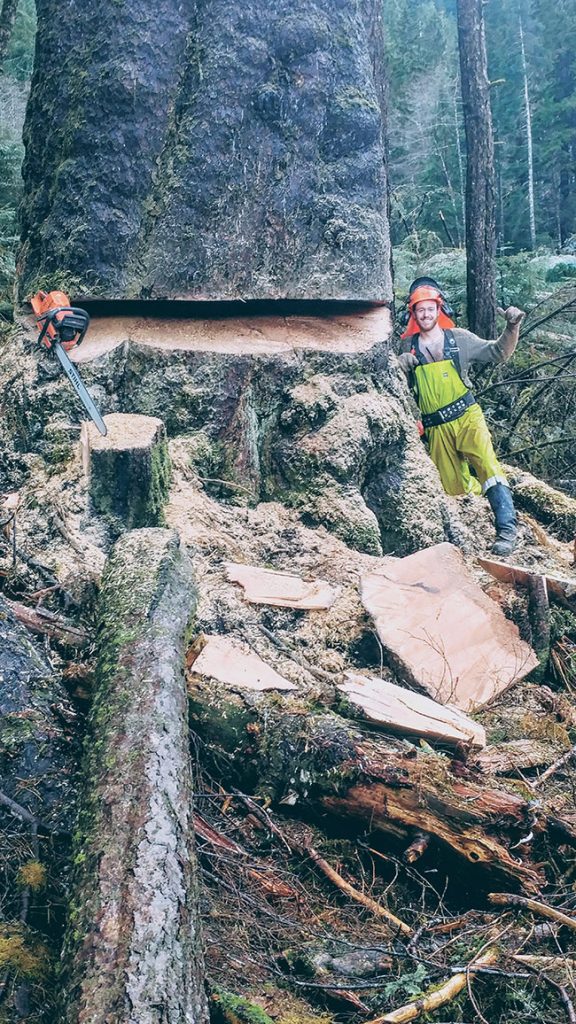 Few people in the industry are as passionate about proper training and safety measures for hand fallers as Brendan Flanagan. Flanagan is an independent contractor based in Vancouver Island – but that’s too simple a way to describe what he does. Under the name Maritime Timber Ltd., he offers a wide range of services: manual tree falling and bucking, residential tree services, first aid services and equipment rentals, and skills training.

Flanagan has been deeply involved in the industry since he was in his mid-teens living in Atlantic Canada. After moving to Vancouver Island in 2008, he earned a technical diploma in forestry, natural resources management, through Vancouver Island University. He then went on to work for Industrial Forestry Service in Prince George.

Over the next six years, he worked on projects for governments, licensees, utilities, and First Nations. He then decided to get involved in the hand falling industry. However, when he first began talking to foresters and friends in the forest community about this, there were many naysayers.

“People were telling me there are declining levels of work and that it’s mostly short-term. A couple of people used the argument that hand falling could disappear entirely, but it didn’t dissuade me,” he says.

In 2013, he took the BC Forest Safety Council’s 30-day New Faller Training program, and then went to work for Alternative Forest Operations, based in Duncan, B.C., at the time.

But he wanted to pursue freelance falling on his own terms, so in July 2014, Flanagan founded Maritime Timber Ltd.

Initially, launching his own company was done out of necessity more than anything else. Manual tree falling and bucking is such a risky profession that fallers often have to create their own contract company to keep liability off of the other project stakeholders, he explains.

As an independent contractor, Flanagan acquired the WorkSafeBC–required insurance to provide his services to a wide range of industrial clients, including public and private landowners, development corporations and project sponsors.

In the bush
Once Maritime Timber was established, he and his network of friends “chased helicopter projects for several years, basically living in barge camps, working for prime contractors,” he says.

Today, Flanagan has grown his business into various operations, with manual falling and bucking as the stalwart. Typically, he’s falling for helicopters and large conventional loggers up and down the B.C. Coast.

Given the diversity of trees along the Coast, he falls a range of species, the main ones being Western Red Cedar and SPF. The trees are anywhere between 10 inches and 14 feet in diameter. Often, he’s falling smaller diameter timber on steep slopes.

“Historically, as land managers, we’ve accessed the lowest-cost operating areas first. But the valley bottoms turned into the toe slope, which went into mid-slope, and since helicopter logging became so prominent, we’re into the upper slope, and now everybody jokes that we’re in goat country,” he says.

However, since the recent B.C. old-growth strategy two-panel review earlier this year, there is a lot of old-growth logging happening now – a countermeasure to potential future restrictions on the old-growth component of B.C.’s working forest, he says.

To fall these trees, he uses Stihl and Husqvarna 90cc chainsaws.

“The general rule on the Coast for a manual tree falling job is to show up with two or more saws running 36-inch bars. Often, I’m running a ground chain instead of a round file, so we have a grinder that chisels a square edge on the tooth and keeps every tooth symmetrical. It’s a great instrument,” he says.

“It feels nice to serve the communities in need, and often in the fire season, the regular logging sites are shut down because of the risk of fire, so it can be a way to keep the work flowing,” he says.

In Flanagan’s opinion, becoming a danger tree assessor is the best thing a B.C. hand faller can do for their career.

“If you have your DTA, you’re a lot more likely to be brought out as a faller, because otherwise you’re going to be there with the tools, but the province will have to ask somebody else to do the assessment. So, they really prefer it if you have the dual certification,” he explains.

Although a fairly wet summer in B.C. this year kept demand low, Flanagan expects danger tree assessing to be a big driver of his business in the future.

Tech Tree focuses on what Flanagan calls ‘mobile home services business,’ as well as land and lot clearing for commercial clients where most of the trees can be felled from the base (although some still need to be climbed, so he employs contract climbers).

The jobs vary from cutting a few branches over roofs and trimming hedges to removing large trees over targets. Flanagan uses a Stihl 201T topping saw for this work, but notes that he’s very fond of the new Husqvarna electric topping saws.

“Running an electric saw for the residential work has limitations, but when it feels right, it’s quite a bit nicer,” he says.

These types of chainsaws are much smaller and meant to be carried into the canopy with the climbers. “Matching the saw to the job allows for a more nimble practice when you’re in the trees,” he explains. “The saw is not strained much compared to a chainsaw where a faller might go out and build a helicopter pad.”

For that type of job, a chainsaw would run at high RPM for the entire duration of the cut, often several minutes. In contrast, the residential saws are usually turned on briefly to make a few cuts and then shut off again.

Elevating the game
The residential tree side of his business also allows Flanagan to mentor people interested in hand falling.

“What I like about it is I can take people who are aspiring to be a production faller and help elevate their game outside the confines of the heavily regulated and costly faller training industry, which I think will increase their odds of success should they pursue production falling and the aforementioned training,” he shares.

His interest in training and mentorship came after the death of one of his friends (who was also a hand faller) in 2016.

“It was a catalyst for wanting to support young and new workers in the forest industry as well as being comfortable navigating as a business owner,” he says.

Since then, he has taken courses in project management at the University of British Columbia’s Sauder School of Business and is following through on his Bachelor’s degree in Technology and Trades Management at Thompson Rivers University.

When working as a danger tree assessor, he also advises and networks with seasonal workers who are interested in forestry. He shares his knowledge about timber cruising and block layout, and his experience moving to the Coast to pursue logging.

“A favourite adage of mine is that ‘a rising tide lifts all boats.’ I think by lifting others in the forest industry, it will only ever help the operations I’m part of, even indirectly,” he says. “Plus, it just feels good to share this knowledge. So, I’ve put a couple of formal power saw courses on for novices, and now I’m adapting this delivery for specific audiences to come.”

Flanagan is most passionate about proper training for new hand fallers entering the industry. In his opinion, there are multiple challenges in this area.

Training new hand fallers is difficult because “there’s not always a ton of will within the seasoned fallers to bring new fallers in,” he says. “Because it’s a hawkish industry, and there is a finite amount of falling work in a given year, industry veterans who have seen the industry slim down through tighter market conditions may feel as though they’re training their competitors.”

The BC Forest Safety Council (BCFSC)’s New Faller Training program is one of the available entry points for hand fallers in the province, and, according to Flanagan, costs upwards of $30,000. The other is the Enform licensing system, provided by the Canadian Association of Geophysical Contractors (CAGC), which he says is less costly and restrictive.

Although fallers in both programs receive training to the WorkSafeBC Faller Training Standard, the network and knowledge they develop are different, he says.

In Flanagan’s experience, it seems that BCFSC trainees know the landscape better and have a better knowledge base. They also focus on further development and competencies post-certification. In contrast, he has found that Enform trainees sometimes think their skills are sufficient and their training is complete after they get their first license.

To combat this, Flanagan would like to see trainees shown what a typical falling job and crew culture looks like. This will help them choose their employment more wisely by discerning potential hardships.

Safety culture
Once trainees complete their chosen training program, they work for an established contractor for a lengthy period to validate their training time. After that, they test into the BC Forest Safety Council’s more robust certification.

Safety is, of course, a critical component of the faller industry, and B.C. requires all fallers to be certified to the standard. While Flanagan believes the standard and certification are good safety measures, he wants to see some changes that consider the variability of the forest.

“I think it needs to be known that the standard works to identify and protect but not completely manage for the hazard. Hand fallers are out there in one of the most dangerous capacities, and I think the men and women employed in this trade need to be allowed to operate not just at the standard but also to one that understands outliers in the data set. This includes allowing people more flexibility in how they make their stumps and putting less focus on the stump itself,” he explains.

Building professional development in the industry would also help, he says.

“Instead of just proving competency one time, there need to be more opportunities to develop a better relationship with the safety agencies and keep up-to-date with the ebb and flow of our skills,” he elaborates. “My end goal, if I had all the power, would be to make this a Red Seal trade where you work through your apprenticeship levels, and you finally become certified years later. A significant benefit to this would be classifying falling as a high-skill trade, thereby opening up possibilities for skilled immigration and student loan options.”

Future outlook
Despite these challenges, Flanagan believes the future of the B.C. hand faller industry is bright.

Some might argue hand falling is a dying industry thanks to mechanized machinery, but “because the regulation exists that you can’t have an uncertified person take on the work after a certain diameter limit, you create a requirement for certified fallers,” Flanagan says.

The trend towards logging on steeper slopes in B.C. also makes it more difficult to get machines in certain areas, particularly if a logger is working on a small block because the cost becomes prohibitive.

While the volume of timber available for hand falling will probably continue to shrink as it has over the past few decades, Flanagan believes more severe wildfire seasons and a lack of available hand fallers in B.C. will help increase demand.

“We’ll always have a necessity for hand fallers when it comes to the smaller scale, high-value resource extraction,” he says.