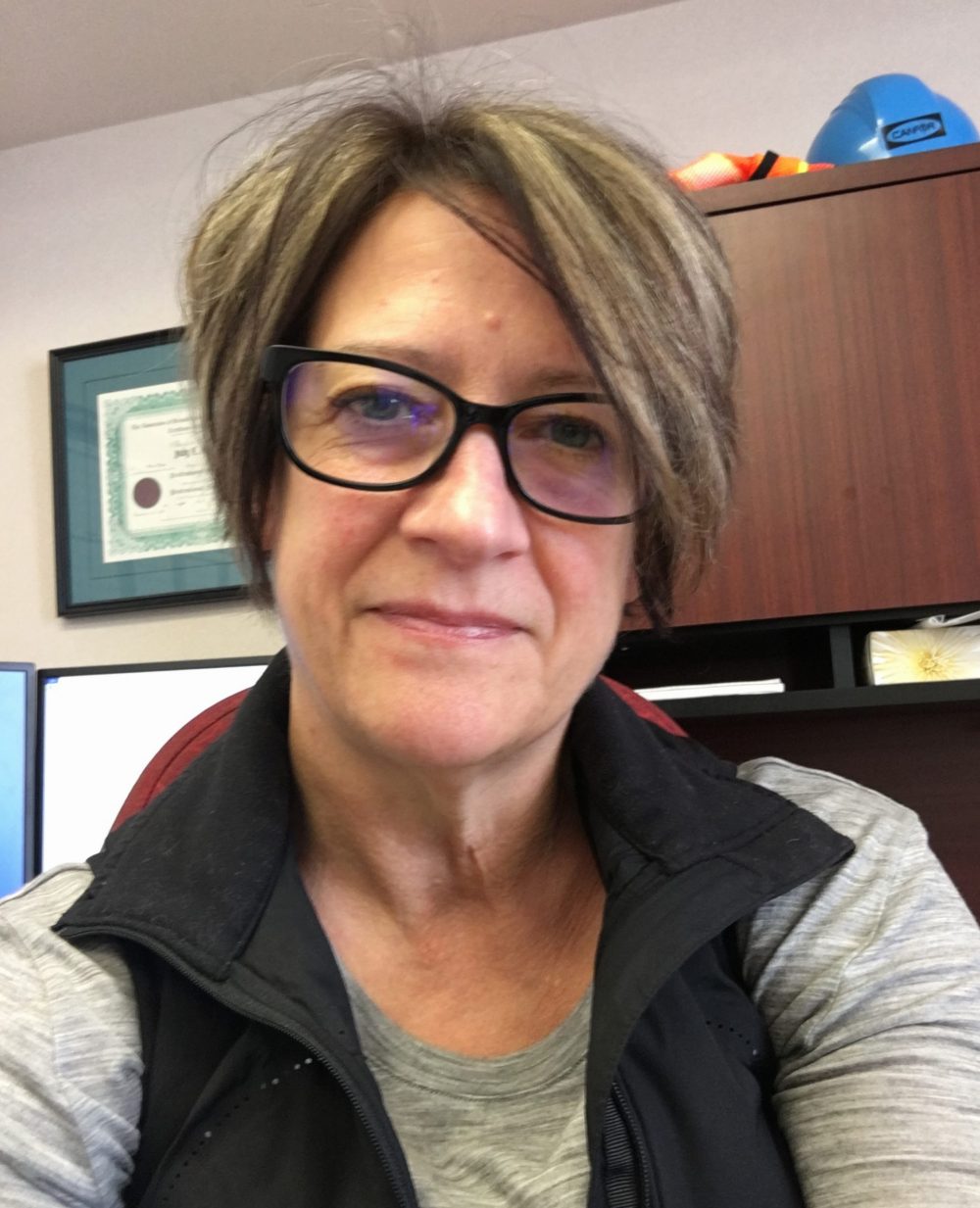 Judy Vasily, a registered professional forester, is the senior manager of strategic planning and business development in the Residual Fibre Group at Canfor Pulp in Prince George, B.C. As she advanced in her career, Judy was often the only woman in the room. She is now happy to be inspiring a growing number of women joining the industry.

CFI: How did you get into the forest industry?

I’m going into my 20th year at Canfor and I’ve been in the forest industry since 1993. I graduated from UBC with a forestry degree and then I wrote my exam and became a registered professional forester.

I was originally hired by a small company called Rustad Brothers. There was a silviculture forester from Rustad Brothers who came down to UBC and I had an interview with him. Our interview was supposed to last about 20 minutes and I was sitting there talking to him for over an hour and a half. I was so taken with what he was doing and how exciting it was. It was just the right fit for me. He hired me and I came up to Prince George in 1993 and haven’t left since.

I worked for Rustad for a couple of years, then I got into consulting for a few more years, and then I got hired at Northwood in 1999, which was bought by Canfor. I worked with Canfor on the solid wood side up until two and a half years ago and now I’m on the Canfor pulp side.

Our group, the Residual Fibre Group, looks after fibre procurement for our pulp mill and our energy plants. We also look after the sale of residual fibre from all of our lumber facilities.

CFI: What is it that appeals to you about working in forest industry?

Early on in my career the appeal was really around being outside and a part of the community of forestry people. You meet all these fantastic people. And there was a lot of interest for me because it is so diverse. You can work in a sawmill, you can work in a log yard, a woodlands group or accounting or HR. It’s just so diverse. There are so many opportunities.

I absolutely love Canfor, it’s a great company, and there have been so many opportunities available. That’s really what kept me here. It’s kept me interested.

CFI: What was it like as a woman, in the minority, when you started out as a forester?

To be honest with you, when I started I was in a logging camp and there wasn’t even bathrooms for women. You come out of the stall and you’re just as shocked as the guy that’s standing there!

The leaders of our organization are really promoting diversity. Canfor has a people diversity initiative, so there is a lot of emphasis on recruitment of women. It’s not where it needs to be yet, but there are more women coming into the leadership roles and there is more emphasis on putting women into the successional streams to get them there. I feel very confident that with these initiatives and leadership support, we’ll get there eventually. But we need for women to step up too. They need to feel confident that they are equally valued and that they can do the job.

CFI: What are some hurdles you see for women looking at leadership roles?

It’s a male dominated industry. There are decades and decades of conscious and unconscious bias that you’re facing. So it’s really important to step up and feel confident that you can do it just as well as a man.

For women, I think you have to be willing to step out of your comfort zone and fearlessly take those jobs.

As organizations what we need to do is provide those women with mentors who are going to help them and push them out of their comfort zone.

There are three people who, when I look back at my career, were the strongest advocates for me. The first one was the forester at the beginning who got me into the career. He believed in me.

As my career developed, there was a second manager who became the vice-president of woodlands and he was an absolute visionary and he really promoted me and pushed me way out of my comfort zone. I can honestly say that where I’m at is because of his mentorship.

The third fellow, he wasn’t in a guidance position, but he was a colleague who had great advice all the time. When I had an issue or a problem I would go talk to him.

These were all men. Throughout my there were not many women in leadership positions that I had access to.

CFI: Are you now filling that role for women?

Yes, I embrace it. When I was in my operations manager role, we had a great distribution of women in our woodlands group. That was one of the things that was really important to me.

In my role now I don’t have any direct reports, but I am involved with our people diversity strategy and work with our HR group on lots of these initiatives.

CFI: What advice do you have for women starting out in the career?

Don’t be afraid of a male-dominated industry. Once you get in, the culture is about the community of people. There are amazing men I work with who I have great relationships with. There’s a lot of respect there.

Personally I think the tides have turned quite a lot in our industry. In my role now I negotiate chip contracts with many people. All the fibre managers that I work with from various companies are men. Women should not be afraid of that. It is just a great community of people and there’s lots of opportunity.

There’s a lot of satisfaction in finding your way and helping to create a culture that’s diverse and respects and values diversity. You become part of that and it’s pretty encouraging.

Our industry is competitive and women are going up against men for the same jobs as so we need to embrace it rather than run from it. It’s a great opportunity to stand on equal ground to win those jobs. Just keep on walking the highroad.

Read more Q&As from CFI’s project on women in the forest industry here.