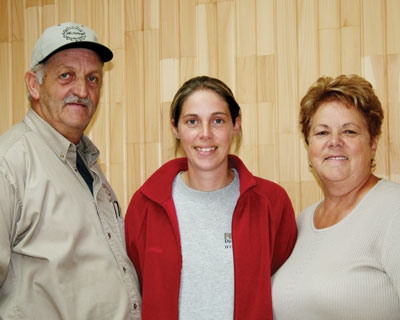 The mill was launched by Armand Dumont, father of Nil Dumont, the current mill superintendent. It was sold to Roland Boulanger Co. Ltd. in 1973, but the Dumont family nonetheless decided to stay and help run the mill. Even after Armand and Nil have had their say, a third generation is in place. Nil will soon pass the torch to his daughter Andrée.

At 31 years old, Andrée has worked in the company for a decade, not counting the many summers as a student. She started as human resources supervisor, but lately has been involved in production, and was closely involved in the optimized carriage project.

Nil, his wife Micheline, and Andrée run the sawmill with their own personnel, approximately 40 unionized workers, working in two shifts from Sunday evening to Friday afternoon (they had recently run three shifts, but are adjusting to market changes like everyone else). They supervise the maintenance of the sawmill, but the owner, Roland Boulanger Co., is responsible for long-term investment in equipment and infrastructure.

White pine logs come from the New England States, and average 12 inches in diameter, but the sawmill sometimes gets logs as big as 60 inches. They are sawn into boards from eight to 16 feet in length, in various thicknesses, lengths, and widths. 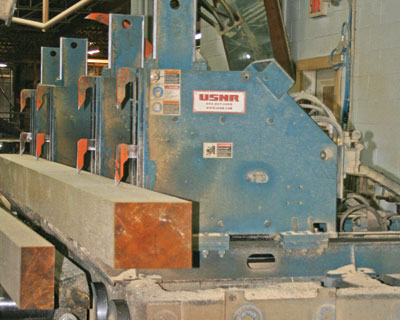 Logs first pass through a Forano (USNR) debarker. “This equipment is old, but our staff is constantly modifying it so that it still does the job,” says Andrée. Logs pass through a metal detector, then towards a new USNR carriage added in 2006, and now driven by a USNR MillExpert 3D carriage optimizer, purchased in 2007.

From the headrig, lumber goes to a Forano (USNR) resaw, installed in 1995, and a Forano (USNR) board edger.  After that, lumber hits a homemade trimmer and sorting table, designed by staff to suit specific needs. Sorted bundles are then stickered and stacked on a PHL Industries system added in 2002.  Boards are dipped from May to October, and are then shipped to Roland Boulanger Co. Ltd. in Warwick for kiln drying.

Step-by-step Learning
October 2006 and January 2007 were key months for Les Manu­facturiers Warwick, as the mill installed the USNR carriage and the mill’s first ever optimizer. “The goal was to equalize the production across each shift,” Nil says in explaining one driver behind the project. “Previously, all the sawyers worked manually, and there were considerable variations, depending on their experience.”

To ensure uniformity in the finished product, the owners of the sawmill first added the new USNR carriage, featuring a 42” opening with four knees and four onboard log turners. It replaced an older Forano carriage that was both slower and less precise. The new carriage boasts knees that move at 20 inches per second, and uses automatic cinch-back dogging to pull the cant against the face of the knee, as well as an equalizing system that ensures the top and bottom of the cant are firm against the knee to avoid costly miscuts. Part of the added precision also comes from the round-flat (circular) rail system used on the new carriage design.

“This rail system is much more precise and wears down less quickly than traditional vee rails. With this technology, it is possible to reach a higher degree of sawing accuracy of sawing, and minimize maintenance and realignments,” explains Eric Brousseau, general manager of the USNR branch located at Plessisville, QC. It was this level of precision and reliability that was needed for the next step.

Three months later and despite skepticism among the sawyers, a USNR MillExpert optimizer with LASAR 3D laser scanning was added to the carriage. As the mill’s first optimizer, management took its time implementing the technology.

“We started gradually because we wanted our sawyers, especially those which have been with us for 25 years, to have the time to be familiar with this technology,” Andrée says. “The ramp-up period lasted approximately three months to reach the targeted performance level.”

While most hardwood sawmills using optimization systems of this type function mainly in the MOF (Minimum Opening Face) mode, white pine logs at Les Manufacturiers Warwick are optimized in the Optimized Grade Sawing mode, or “full break down” mode. The system can use two LASAR sensors to offer up to a 300-degree view of the trunk. Due to the quality of their logs, the Woburn sawmill installed just one sensor. “To date, that has worked out very well, and we are very satisfied with the performance,” Nil says.

The scanning system is installed just ahead of the USNR carriage, and sends information on each log to the MillExpert system’s two computers. The main computer gathers raw scan data and grade information from each log and develops the whole log optimization solutions. A second computer was supplied as a complete and identical spare, enabling the mill to run off-line simulations using actual log data for further product analysis. Rolling mill orders and production lists from Roland Boulanger drive the decisions. The system has quickly become an essential production tool.

“When I started to work with the system, I was really discouraged because it seemed so complex,” notes Andrée. “But after three months, I became familiar with it, and now we wouldn’t do without it!”

The mill processes white pine in several different thicknesses, lengths, and widths for the molding market, so they have to change production parameters at least each week. “Since the system has been running, I have programmed more than 20 patterns, simulated on the off-line system before we put them into production so we will know the bottom line results,” she adds.

Production now sits in the 400 logs per shift range, targeting specific products and maximum downstream value. Overall, Nil is happy with the choice, and the support level.

“USNR has supported us on every level, from track alignment and carriage installation to the PLC and optimizer. We did the test on schedule, and started up on time.” Earlier this year the mill also installed a USNR 58-inch wastewood disc chipper.

Careful Drying
Boards are dried as soon as possible at the off-site Roland Boulanger facility, which runs 23 Cathild kilns. Nine have a capacity of 50 000 bdft, and are located beside the Warwick’s plant, and 14 have a capacity of 125 000 bdft, located a few kilometres away at a place called Industrie Daveluyville. On average, they dry between 25 and 27 million bdft.

The kilns are also continually upgraded. In 2007, the 14 kilns at Daveluyville were upgraded, including new software. Now a single program runs all kilns in accordance with downstream production and quality needs.

Since the boards will be used to make moldings, MC must range between 8 and 10%, a little lower than required for windows and doors, but higher than hardwood flooring. Drying will vary according to the thickness of the boards, but a dirty average is between 400 and 430 hours for 5/4 product. While the Warwick mill saws only pine, the molding operation also uses hardwoods like oak, maple, and birch, as well as MDF. 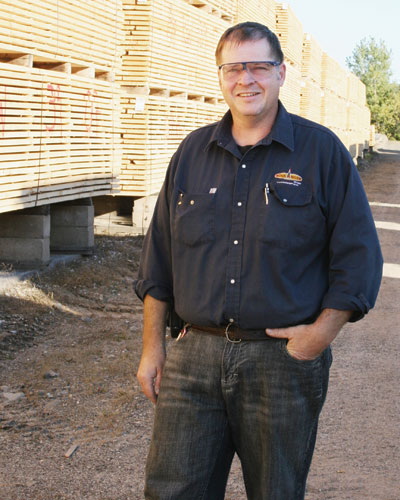 Benoît Leblanc oversees the entire molding production process, from unloading lumber to drying, edging, and finally the jointing plant. The Montreal native chose to live in the heartland of Quebec 20 years ago. After community college studies in cabinet woodworking, he was hired by Roland Boulanger. He likes the challenge.

“Drying this kind of wood is technical, but it’s also an art. We depend on technology, but we also know the wood well enough to detect any anomalies or imperfections that will allow it to dry properly or not.”

The lumberyards here can handle 2.5 million bdft, with piles oriented according to prevailing winds and sitting on 20-inch-high concrete bases to avoid contact with the ground. In summer, boards are moved as quickly as possible to the kiln dryers.  “We apply the “just-in-time” method, and particularly during the summer to avoid staining,” Leblanc adds.

As in many towns, the machinery and kilns at the plant are surrounded by a residential area. “To maintain the quality of life of our immediate neighbors, we installed soundproof cabins on the engines of the kiln dryers, as they run 24 hours a day and seven days a week. In addition, we change out the wood only during daytime.”

The dried boards are then stored in warehouses located next to both kiln sites. Highly concerned with wood quality and freshness, Leblanc is very tempted to try out the met­hod of snow-bound log storage being tested by FERIC (FPInno­vations). “I would like to test it at least with a sampling. I am sure it would give us excellent results.”

Meanwhile, back in Woburn, the Dumont family strives to improve the role of Les Manufacturiers Warwick Ltd. as white pine lumber suppliers for Roland Boulanger Co.

The edge of optimization

Warwick sensibly started its optimization at the front end of the mill, but options for white pine and hardwood mills at the edgers are rapidly expanding as well. A new player is McDonough, a hardwood bandsaw machinery supplier for 120 years. McDonough has added a full line of circular saw edgers and gangs, in both optimized and conventional versions to complement its line of resaws, bandmills, and carriages. 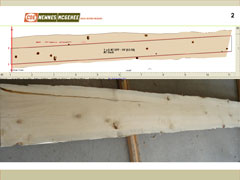 “This is a great fit for us and our customers,” says Matt Tietz, vice president. “The talent we already had and their experience in the edger game, combined with the expertise we were able to bring on board made this an obvious move.”

That new experience involves two engineers with no shortage of edger design and manufacturing experience. Leading up the edger division is Hugh Hawley, who has more than 10 years of experience on the sawmill floor and in the edger design and manufacturing shop. Hugh began his career as a sawmill supervisor at a softwood mill in Atlantic Canada, and rose to sawmill manager. He then ran a small sawmill of his own before moving to the equipment side.

Helping Hugh is Steve Mockler, who will take over edger design as senior engineer, edger division. He is a professional engineer with nearly 10 years experience in edger and gang edger design. Hugh notes that Steve has been behind some of the most significant edger design accomplishments of the last decade.