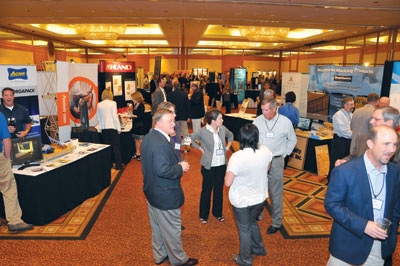 Held in conjunction with the annual meeting of APA, the Engineered Wood Association Info Fair was open during strategic periods of the three-day meeting, then closed to allow exhibitors to participate in a wide array of other meeting events, including a general session, roundtable discussions, the APA Marketing Advisory Committee meeting, a golf tournament and networking receptions.

“Info Fair exhibitor numbers were up about 35 % from last year, suggesting, I think, that the economy is stabilizing,” said EWTA Managing Director Terry Kerwood.
Also announced during the meeting were the winners of the EWTA Supplier of the Year Awards, which are based on votes of APA’s members.  The winners were Ventek, Inc., Eugene, Oregon, in the equipment and tooling category; Willamette Valley Company, Eugene, Oregon, in the materials and supplies category; and Adalis, Vancouver, Washington, and Panel World magazine, Montgomery, Alabama, co-winners in the consulting and services category.  Also winning a new annual Innovations Award was Westmill Industries, Ltd., Aldergorve, British Columbia.  Westmill won that award for its LightSORT™ green veneer moisture detection system.

EWTA, a related nonprofit organization of APA, is comprised of approximately 85 industry suppliers.  Its primary purpose is to serve as a networking and information exchange vehicle for engineered wood product manufacturers and their product, equipment and service providers.  In addition to organizing the annual Info Fair, EWTA funds research projects of benefit to manufacturers, publishes the Engineered Wood Journal, sponsors forums and networking events, and maintains a website (www.engineeredwood.org) for information transfer.