August 31, 2015 - New sawing technology is driving both recovery and production from L&M Lumber’s larger logs, although at this mill, large is relative. Originally opened in 1973 and named after its founders, Lloyd Larsen and Mike Manojlovic, the sawmill focused on processing the large amounts of small profile timber that were available at the time, due to large scale clearing of agricultural land in the area. Small profile timber is still a mainstay at the sawmill. The majority of the wood processed on site is used to make 2x4s, as well as a smaller amount of 2x6s and a few other products. 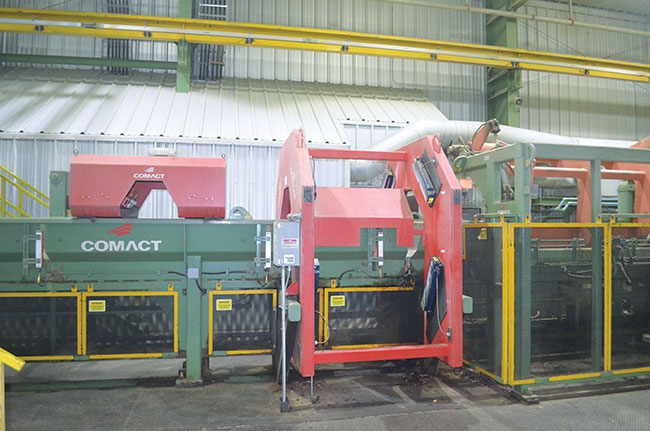 The addition of the new line took approximately nine months from digging the foundation to commissioning and replaced an old vertical band saw line.

Between the new Comact line, upgrades to the sorting and stacking lines – to be able to keep up with the increased production and to allow moisture sorting on both sort lines – and the purchase of two new energy efficient compressors, the company has invested $25 million to enhance efficiencies and production at the mill.

The main drivers behind the investment were increased flexibility and production, with a secondary driver of increased recovery, according to Dave Rodall, former quality control supervisor and current manager of occupational health and safety for L&M Lumber Ltd.

“The new line replaced an old vertical twin band saw/twin horizontal band saw and Ukiah gang saw,” explains Rodall. “There was no scanning on the old line, and the gang saw was horsepower limited, which limited optimized positioning, speed and the ability to run 2×6 centre cants on the larger logs. There were also quality issues with the slabs produced by the horizontal band saw, especially in the winter. The new line has achieved all the above metrics.”

The mill’s three lines combined now process approximately 30,000 eight-foot blocks per eight-hour shift and have an annual production of approximately 230 MMFBM, with the new Comact line accounting for between 55 and 60 per cent of the overall production, depending on the log mix.

Rodall says the mill is running about 10 to 15 per cent higher production, when compared to before the upgrade.

“The upgrade has increased the percentage of higher value products by optimizing the log rotation, and has also increased mill nets by allowing the flexibility to respond to market conditions by controlling the 2×4/2×6 outturn mix,” he explains.

The new line
Long logs are fed to two cut-off saws by two Caterpillar 569 knuckleboom loaders. The cut-off saws produce 8’ nominal length logs for the mill, which are placed on conveyors that send them through debarker infeed pit transfers to two Comact LWF200 wave feeders. The wave feeders direct the logs through the MDI metal detectors where they are processed by two Nicholson A8 single ring debarkers on their way into the sawmill. There, the logs are sorted by size – with the logs that are greater than eight inches in diameter being fed to the new line using Comact LWF300 wave feeders. The upgrades boosted sorting capacity to six log sorts – with the latest transfer deck built in-house – and increased the number of lumber sort bins from 12 to 44.

“The sawing section is called a ‘Quad,’ but it’s not really a quad,” explains Rodall. “It has six sawlines, three per side.”

Once a log makes it through the primary breakdown line, the center cant enters the secondary line, which consists of two C1-Scans (3D linear optimizers), and a TBL3 single-pass cant sawing and profiling unit, which features independent positioning and cutting tool modules for minimum cant spacing; cylindrical chipping heads; an operating speed of up to 650 fpm with an eight-inch gap between cants; and automatic cant positioning during the feed process.

All scanners on the new line and edgers were supplied by Comact. The scanner heads were produced for Comact by LMI Technologies and Hermary Opto.

After the logs are processed, the lumber makes its way over to the sawmill’s two new Comact lumber sorter lines, are stacked on two new USNR stackers, and transported to the kilns, which are owned by Nechako Lumber Ltd., another company within the Nechako Group of Companies.

“We added 10 new bins on this line, and another 22-bin line to replace our old moisture sorter line,” says Rodall.

Drying operations
Moisture sorting is performed in the sawmill using SCS MC PRO 2400 moisture detectors, which were added to an existing unit. There are several schedules for the drying operation.

The company uses a special dry sort schedule from FPInnovations for a medium and a green sort for the 2x4s it produces. All other schedules are developed in-house to dry the lumber and to comply with the CFIA heat-treat requirements.

Four kilns that generate upwards of 22 million BTUs of heat handle the drying of the lumber. The newest kiln, Kiln 4 – a 7 million BTU unit manufactured by COE, a USNR company – is used for drying the majority of the green lumber. The newer kiln, installed approximately 10 years ago, has a variety of features to aid in the company’s drying operations.

“They called it the Cadillac of kilns when they put it in,” recalls Rodall. “It has 24 zones, each with temperature sensors that control the heat valves in each zone. The moisture content in the wood is monitored and it’s all variable, including the fan speed. There are plates that act as weight restraints that drop down onto the wood to hold everything tight so we don’t degrade our top tier wood; the tracks are heated so we don’t get ice build-up on them, so it’s easier moving the carts in and out in the wintertime. We do our tough drying in there.”

All four kilns are entirely heated by thermal oil through the hog fuel generated by the sawmill, as is the planer. Most of the excess heat from burning the hog fuel goes to creating electricity used on-site through a Turboden Organic Rankin Cycle (ORC) Turbogenerator with a generating capacity of 2.1 megawatts. The sawmill is almost entirely heated through natural gas furnaces, with a small amount of excess heat from the hog fuel coming over through a forced air system.

Nechako Lumber’s planer mill also includes some technical advantages, including what it bills as the fastest running Gilbert planer at 3,000 fpm, and three of Comact’s GradExpert optimized lumber grade systems.

as well as crack detection and rotation scanners.

Value of variable
As part of the company’s plans to reduce energy consumption at the Vanderhoof mill, two Gardner Denver variable-speed compressors were installed by local distributor Skeans Engineering – one in 2014 and another in 2013 – replacing three older-style compressors that were in operation.

“Two of the older compressors have been decommissioned,” said Rodall. “We keep the third one in reserve in case we’re doing servicing on the new ones.”

Although BC Hydro metered numbers were not available at the time, the company expects annual energy savings from the two new compressors to be somewhere in the range of $100,000 to $130,000. The savings are part of the BC Hydro Powersmart Program.

“The Nechako Group of Companies takes energy conservation very seriously as part of a desire to become as efficient as possible,” says Rodall.

Safety first
Some aspects of the third line were altered partway through the construction process due to the accidents that took place at Babine Forest Products and Lakeland Mills.

“This caused us to stop construction and re-evaluate everything we were doing to ensure the safest possible building construction,” says Rodall.

Between the original design and some last minute changes, the building features included: filling all wall cavities completely with insulation; installing “shedder” plates on all exposed beams to eliminate the buildup of dust; finishing the inside walls with metal cladding that can be washed down; installing all MCC’s and PLC’s inside their own rooms, complete with pressurized climate controlled air, and sloped roofs that minimize dust buildup and can be washed down; installing low temperature LED lighting; and installing wall fans to remove suspended dust.

The sawmill also has a SimplexGrinnell fire and heat detection alarm system.

“With the exception of a small dust collection system on the debarker conveyors, there is no pneumatic dust collection in the sawmill,” explains Rodall. “We rely on a combination of containment, conveyors, misting systems, roof and wall fans and a comprehensive manual cleanup regime.”

He added that the company is also working on engineering controls for areas that create a lot of dust.

Investing in the future
The Nechako Group has a long standing and good working relationship with the both the local Saik’uz First Nation and the District of Vanderhoof. This has resulted in a number of agreements in areas of First Nations employment and timber supply.

Not unlike the Canada Geese that enjoy flying high above the town of Vanderhoof, L&M Lumber is ready to make its production soar with the addition of its new optimized line, and all of the other upgrades made possible by the company’s $25 million investment in the sawmill. The future is looking bright in Vanderhoof.

Overcoming challenges
The addition of L&M Lumber’s third line had a three-year planning and engineering process. There were a large number of challenges that popped up from the planning phase to shovels in the ground, and eventually, the commissioning of the line.

Some of these included: