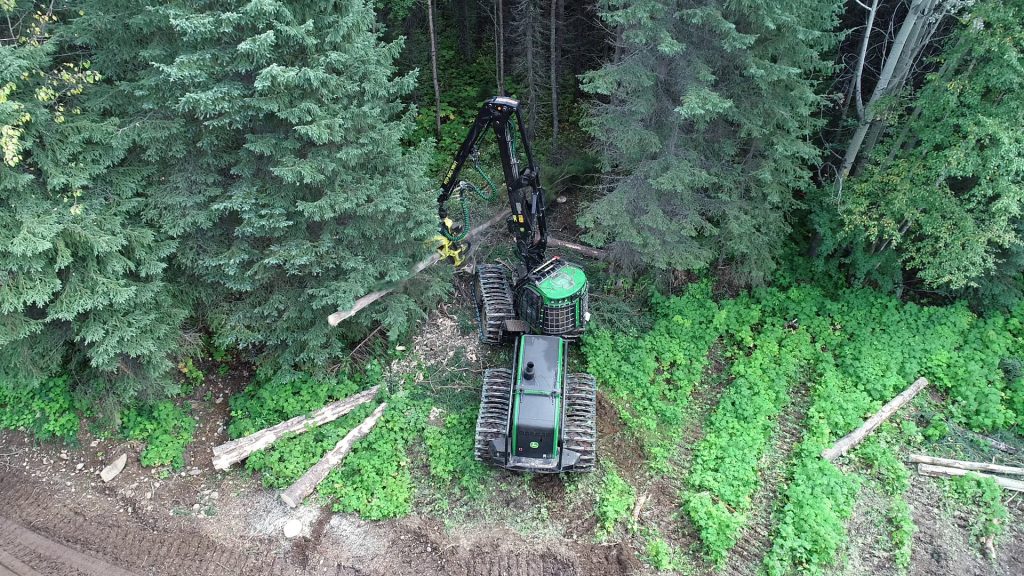 As the amount of mountain pine beetle killed stands in western Canada decreases, timber supply will shrink drastically. For logging contractors and sawmills, particularly in B.C., this leads to lower production and even mill closures.

But FPInnovations’ research on commercial thinning in western Canada may help reduce the impact.

“It’s not going to completely replace that downfall in cut, but it’s one tool in the toolbox that we could use to at least recover some volume that is otherwise inaccessible,” says Ken Byrne, FPInnovations’ manager of resource management. “If we can reduce the number of mills that shut down, that preserves jobs and sustains the economy of some of these smaller communities throughout B.C.”

The inaccessible volume Byrne is referring to are forest stands in “visual corridors,” places where it’s not considered socially acceptable to clear-cut. The goal is to partially harvest those blocks using commercial thinning techniques, which preserves the visual appeal of a pristine landscape for B.C. residents.

The spark for research on commercial thinning in western Canada was a conversation between Byrne and a woodlands manager from one of FPInnovations’ member companies.

At the time, the company was clearcutting in areas where mountain pine beetle had struck, but the end was in sight. The potential viability of volume from mule deer winter range habitat, where commercial thinning is allowed, so long as certain stand structural attributes are left intact to accommodate for the mule deer, was being considered, Byrne explains.

“You can do some commercial thinning there, but it’s been so long since anybody’s ever done that kind of work that the operator expertise and the machines that are capable of doing that just are not common,” he says. “There were some commercial thinning harvesters used 20 years ago, but since then we’ve been basically mowing down dead pine with feller bunchers, and that’s not the most ideal piece of equipment in a commercial thin.”

The woodlands manager made it clear to Byrne they didn’t have the expertise to carry out a commercial thinning operation from block selection to layout and instructions to operators.

FPInnovations reached out to other western member companies to gauge interest in commercial thinning and found considerable interest, particularly because commercial thinning has the potential to mitigate some of the fibre supply shortfall over the next 15 to 20 years.

The workshops consist of three presentations ranging from higher level landscape objectives to strategic planning and costs to operational implementation. The presentations were followed by a demonstration in the forest showing participants how to define residual stand and harvesting objectives, including instructions on how to select trees, provide instructions to operators and supervision to ensure successful implementation.

In these workshops, CWFC research scientists Jean-Martin Lussier or Cosmin Filipescu present on the available fibre and age-class distribution of trees, as well as some of the theory behind commercial thinning. They discuss how commercial thinning fits with managing the stages of stand development from a biological perspective.

Byrne then presents productivity studies on commercial thinning to the attendees. “I’ve linked machine productivity to various stand attributes and used that as a way of predicting the productivities and costs across the landscape based on standard landscape attributes,” he explains.

Philippe Meek, from FPInnovations’ Montreal office, rounds out the workshops with a presentation on the “one, two, three” method which is a system of simple rules to help guide harvesting trail layout, tree selection and spacing. It is a system that instructs operators how to select target trees and meet target volumes.

“We provide a simple method to operators so that they can select the right trees at night or in a snow storm, for example,” Byrne explains.

Commercial thinning in western Canada not only helps combat a shrinking timber supply, but also provides several other benefits. For example, commercial thinning can be a form of stand enhancement. “It’s actually improving the vigour of residual trees because typically, as in the case of mule deer habitat, those forests have growing season moisture deficits,” Byrne explains.

“Because we’ve been putting out fires for 100 years, a lot of these stands have filled in with smaller stems that are competing for moisture,” he continues. “If we go in and thin them, then residual trees don’t have as much competition from the understory for moisture and nutrients, especially during the growing season.”

Commercial thinning can also help prevent wildfires: “If we’re going through and removing some of the smaller stems and the ladder fuels out of the forest, then we’re actually making the forest more fire resilient,” Byrne says. “There is a strong argument for commercial thinning with respect to reducing fuel loading and reducing the fire hazard in some of these stands.”

These benefits should help offset the considerable cost of commercial thinning, which is typically done with a harvester and forwarder system. “That machine combination is approximately two million dollars,” Byrne says. “We can’t just expect contractors to go out and buy two million dollars’ worth of equipment and say, ‘Okay, now you’re going to do commercial thinning.’

“We need to have a plan to properly lay out these blocks, show people how to lay it out, how to give instructions to operators and train the operators, before they can become profitable and sustainable.”

According to Byrne, it takes almost a full year to train a harvester operator, which adds an additional cost for logging companies.

FPInnovations is also looking at using feller bunchers as an alternative to harvesters and forwarders, since these machines are more common in western Canada. Feller bunchers can make a trail and drop stems, and then a processor can process the logs or a skidder can pull the logs down the buncher trails, ideally without damaging residuals, Byrne explains.

“It’s not the perfect machine combination, but at least it gets people working,” he says. “As more of this sort of volume becomes available, then we could start to make a case for people investing in more specialized harvester/forwarder systems.”

As with any machine investment, contractors need the assurance that the harvester and forwarder would be kept busy, and that requires some changes on the provincial government’s part. Byrne believes the government could play a larger role in encouraging the development of commercial thinning. “I don’t think it can be fully implemented based on just the sales of logs alone. The other values that are benefitting from this stand treatment need to be recognized and compensated for,” he says.

“If we can demonstrate that, yes, we can access extra fibre that is not currently accessible, then it may justify allowable annual cut adjustments to provide more opportunities for licensees, to lay out blocks ahead of contractors and then justify that investment,” he adds.

But a balance must be struck because subsidizing commercial thinning operations could result in negative public perception, Byrne warns.

Commercial thinning is a familiar concept in eastern Canada where there is more privately-owned land that can be harvested, which means land owners can be assured they will reap the benefits of investing in commercial thinning, Byrne says. But in western Canada, 95 per cent of industrial forest land is publicly-owned and managed through forest licenses or tree farm licenses.

“With forest licenses, they’re volume-based, so your activities on the land base is not defined by a particular area. So, any extra investment that you put into that land base, there’s no guarantee that you will reap the benefit of it. Some other company in 40, 50 years – whenever the next rotation is – could come in and reap the benefit of the investment you put in,” Byrne says.

Although tree farm licenses are area-based and provide more security of tenure than forest licenses, there is still some risk that some of these areas could be re-assigned, which has happened in the past, he says. This uncertainty is a big reason why commercial thinning has not been adapted widely in western Canada.

“We’re also a victim in B.C., historically, of an abundance of riches,” Byrne adds. “We haven’t really had the need to go in and do any kind of commercial thinning. We’ve always had enough land of good quality timber that we could go in and clear cut to meet most of our supply demands.”

As the western provinces in Canada face a declining timber supply, the potential of commercially thinning stands is more important than ever. As such, FPInnovations is planning to release a best management practices guide for commercial thinning within the next year.

“We’re very much crawling at this stage,” Byrne says. “There are three forms of learning a new technique. First, in the form of the workshops, we basically tell people how it can be done. Now the next step is to implement it and show people how it needs to be implemented, and then, of course, there will be some follow up to validate their performance in terms of meeting the objectives of stand prescriptions.”