For years, pundits have warned that a smaller and significantly different B.C. forest industry is inevitable. Their argument gained traction during the attrition of coastal operations, heated up in the depths of the 2008 recession, and became a clarion call when it was learned that the mountain pine beetle had killed an estimated 710 million cubic metres of Interior timber.

The only question was, when would the time come?

If a new report released by the International Wood Markets Group is anything to go by, a restructured industry is about to become a reality.  The 170-page “B.C. Mountain Pine Beetle: Evolving Impacts & Opportunities (to 2031),” states that the Interior is nearing its peak economic sawlog availability and that lumber and veneer production will decline beyond 2014, with the annual allowable timber harvest falling from 60 million cubic metres to 40 million by 2020-25. It also states that despite over 22 mills having closed in the Interior since 2005, few of them will likely reopen due to lack of available timber – and some of the 66 remaining mills in the province will face more pressure from curtailment and/or closures in the near future.

No sooner were these facts disclosed than another document, this time from the forests ministry, was leaked to the media. “Mid-Term Timber Supply Project,” which was originally published in February and leaked in April, predicts that the Lakes district’s AAC will drop from two million cubic metres currently to 500,000 once the beetle wood becomes unusable, and forest employment will drop from 1,572 jobs before the beetle epidemic to 521. Prince George’s harvest total will drop by almost half, and the economically viable supply of dead pine in the Quesnel region could last for as little as
another 18 months.

The document outlines proposals that would mitigate the downward spiral, including relaxing visual quality areas, old-growth management zones and wildlife connectivity corridors. Another proposal involves swapping existing cutting licences to increase wood supply for the Lakes and provide enough long-term supply for reconstruction of the Babine sawmill at Burns Lake, which was destroyed in an explosion on Jan. 20.

International Wood Markets Group president Russell Taylor says, “For years, a lot of forest policies in B.C. were driven by aesthetics, but now Victoria openly acknowledges we’re facing a timber crisis and basically agrees with the numbers we’ve come up with. I think it took the Babine and Lakeside mills blowing up to galvanize the policy makers into finding more timber, and fast.”

But if the hour of reckoning for B.C.’s forest industry is finally at hand, MaryAnne Arcand, executive director of the Central Interior Logging Association, is taking it in stride.  “The figures Russ and his people came up with were ones industry had been mulling over for quite a while, it’s just that now they’re official,” she says.

As bad as the news presented by Taylor and his colleagues may be, their figures are hardly without precedent. “For example, we predict that Interior lumber production will drop to about nine million board feet from 2020 onward, compared to 10 million board feet before the beetle infestation and a peak of 15 million board feet in 2005,” he says. “However, nine million is what was harvested in 2009 at the low point following the U.S. housing market collapse.”

Taylor isn’t suggesting the doom and gloom that characterized the depths of the recession will become the norm: “For one thing, industry is constantly improving production recovery, innovating and establishing new markets, which theoretically will make the reduction less painful.”

A case in point is Canfor. During its annual general meeting on April 26, president and CEO Don Kayne told board members that over $40 million will soon be spent in its southern B.C. mills, which follows $155 million of a $300-million capital investment program being spent on major sawmill upgrades in 2011, including the Vavenby facility (which received a new canter line, grade optimizer in the planer and an upgraded planer feed system) and the Polar and Grande Prairie
operations.

Other factors could make the reductions outlined in the International Wood Markets report seem more palatable. “Even though a drop in lumber prices to the 2009 lows of US$150 per thousand board feet would be calamitous for mills that now require about $280 to break even on the 10-year-old dead wood they’re now processing, most indications point to the potential of a lumber super cycle with prices hitting well over $400 by 2014-15, says Taylor. “That’s because U.S. housing starts will recover to a significant degree, the economy in Europe will improve somewhat, and Asia’s massive demand for lumber will continue to grow.”

Taylor also has positive things to say about the future of coastal operations: “From a low of 11 million cubic metres in 2009, the timber harvest has grown to 18 million cubic metres in 2011, and we can thank log and lumber exports to China and Japan for the upward trend, which has even given value to the dog’s breakfast of some of our stands. The coast will soon enjoy a return-to-normal situation where supply and demand is in balance, albeit with a lower sawmill capacity and a slightly lower AAC.”

But many of these good news scenarios are vulnerable to a host of external circumstances, not the least of which is the likelihood of the B.C. Liberals being defeated in next year’s provincial election by the NDP. “That could be a fundamental game changer,” Taylor admits. “If the NDP’s record of the 1990s is any indication, doing business in the forestry sector could become more problematic. There could be a loss of industry options, such as timber supply increases, log exports and other policies that have been put forward by the Liberals.”

While analysts hypothesize, people in the field view the future with two words in mind: economic diversification. “All the haulers who lost their jobs when the Babine mill exploded were rehired within days by the mining and oil and gas sectors,” says Arcand. “There’s a huge amount of work and a critical shortage of manpower in the Interior, and I don’t see that situation changing anytime soon.”

Doug Routledge, vice president, forestry and northern operations for the Council of Forest Industries, makes note of diversification within the logging industry: “In terms of our solid wood we’ve gone offshore to develop new markets to a greater degree than ever before. And thanks to capital investments that continue to be made by the Canfors and West Frasers of the world as well as by smaller operators, we continue to be on the leading edge manufacturing-wise.”

Indeed, Canfor president Kayne stated in April that his company is “working to further reduce the impact of the infestation by acquiring additional green fibre resources. In 2011, we moved to acquire the Tembec Industries southern B.C. Interior wood processing assets and associated tenures. When that deal closed about a month ago, we added 1.1 million cubic metres in annual harvesting rights, 420 million board feet of annual production capacity, and 505 new Canfor employees.”

The B.C. industry’s propensity for self-improvement has led to another area of diversification. “Recent developments in the economic viability of non-sawlog products are increasingly allowing us to adopt a full-fibre forest management mentality, whereby the portions of trees we harvest that can’t be made into traditional lumber and veneer products can be used for new biomass-related products such as pellets, heat and energy and the newly emerging product area of biofuels,” says Routledge. “Current economics make this usage only feasible if processing plants are located near the fibre source, but as the economics improve, we’ll be able to go farther afield.”

Routledge concedes that employment opportunities in the bioenergy sector won’t match the volume of people who will be displaced by the harvest cutbacks. “Bioenergy is just one part of a larger puzzle,” he says. “If we transition completely to a full-fibre industry it will lessen but not eliminate the cutback impact – although it’s currently a very attractive time to be taking up a career in the forest sector as we are at the bottom of the recession cycle and the pipeline of qualified professional, technical and trades workers is empty.”

“Also important is that the skills needed for our sector are transferable, and any job losses can be absorbed by other resource sector industries,” Routledge goes on to remark. “The bottom line is we’re becoming well aligned to emerge from this downturn as a smaller, more diverse and much more stable industry, and in doing so will continue to be a key contributor to the economic sustainability of rural resource dependent communities in B.C.”

Taylor agrees. “Considering the world market will ultimately decide our future, nobody knows with any certainty what will happen. It could be that a lot of mills hanging by a thread today will survive long enough to enjoy the potential super cycle. Maybe the government will be able to free up more fibre. Only one thing is sure: there’s a new game and new rules to our industry. So let’s start playing.” 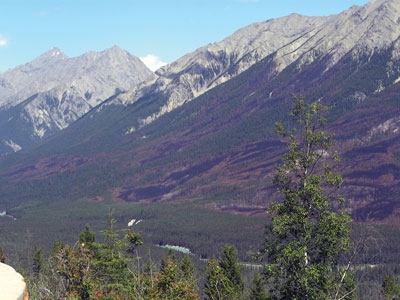 The mountain pine beetle has killed an estimated 710 million cubic metres of Interior timber. For years
Print this page