Dec. 16, 2013 - For some logging contractors, the new wood auction system in place since April in Quebec has created great opportunities. Besides helping Réjean Girard come back home to log, it also has secured his wood supply enough to trigger investments in more efficient machinery.

“The auction system forced us to become more efficient. We need to manage the harvest more closely – the wood does not stay on the ground for long,” explains Girard, who is a co-owner of Entreprises Forestière Lemieux et Girard. On the ground, more stringent management means that every cubic metre of wood is accounted for, and more money is coming in.

More money is good, but being close to home is priceless. Girard worked for 16 years for Boisaco, in the North Shore region located two hours east of Quebec City, before he had an opportunity to log in Lac-Saint-Jean, also known as blueberry country, four hours north of Quebec City.

A native of Saint-Nazaire, Girard finds it easier to work close to home. “It’s good for the family and it’s easier to bring in our mechanics as well,” he said. It’s also a way to motivate his three kids to eventually take over the family business. Christopher, 24, and Andy, 23, have been part of the team for a few years but his youngest, 17 year-old Brian, started training on the forwarder last summer. “There are no more operators these days. It’s our biggest challenge as contractors,” finds Girard. So he is training his own.

He was also running two Ponsse forwarders, an Elephant and a Buffalo King. Girard wanted to replace his 18-ton Buffalo King, which had 20,000 hours of operation in the spring of 2014. But that was before Jean Trottier, president of forestry equipment specialist Hydromec, called him on April 14.

“Ponsse called me to organize a joint event. They wanted to announce the 9,000th sale at the same time as the Scorpion launch for North America,” says Trottier, who had until the end of the day to sell a Ponsse forwarder or harvester.

Trottier knew who would be the best client for an event with this kind of visibility. “Professional and competent, Girard was definitely the best ambassador for this type of event,” he adds. It took five minutes to convince Girard to register the fastest sale in Trottier’s career. Ten minutes after Ponsse’s call, he called them back to let them know the event was on.

On Oct. 10, Girard and two of his sons landed in Finland for a ceremony that would result in an exchange of the keys of his new machine: the Ponsse Elephant King forwarder. “Ponsse machines are smooth to operate and reliable,” notes Girard, who wanted to increase his production capacity. Working generally in areas of mixed wood, where he harvests white birch, trembling aspen, jack pine, black spruce and some maple, he needed a bigger and more powerful forwarder, efficient in tough conditions.

“For every cubic metre of wood, we have less money than we had 20 years ago. And with the fuel prices rising, we have no other choice but to become more efficient and productive,” comments Girard. To stay competitive, the secret is to have the machines running at all times, he adds. Maintenance is the key but sometimes a new machine makes more sense financially, even if it means a new loan must be taken out.

Accustomed to working in the mountainous terrain of Quebec’s North Shore, Girard is pleased to work on more level ground. “For the same money, it’s easier on the machines,” he says. And working with Le Groupe Val is a charm. “They build plenty of roads to facilitate our work. We are never further than 1,500 feet from a road.”

Le Groupe Val has won seven wood auctions for a total of 187,940 m3 in the 2013 auctions launched by Quebec’s Wood Marketing Office (Bureau de mise en marché des bois, or BMMB). Generally speaking, the auctioned wood is logged by the company’s four teams of subcontractors that use feller bunchers and one team that cuts tree-length wood. But Groupe Val hasn’t given up the contract work it does for other companies.

Réjean Girard’s team of 10 employees will harvest approximately 130,000 m3 this year. Entreprises forestière Lemieux et Girard’s weekly harvest varies between 1,600 m3 in mixed wood to 2000 m3 in pure softwood stands. The machines run around the clock for 4.5 days a week with one hour a day of maintenance. Logs in this part of Quebec are notoriously small, averaging 0.1 m3 or smaller. The average tree size Girard’s team harvests is around 20 centimetres in diameter.

According to the tree species and size, the wood then goes to Arbec, Scierie Thomas Louis Tremblay, Resolute Forest Products, or Scierie Lac-Saint-Jean. Each sawmill has unique needs and requires the wood be cut to specific lengths for processing. For example, aspen should be cut at 15.5 feet, white birch at 16 feet and jack pine at nine or 16 feet long. “With so many different kinds of species and sizes, some forwarders can’t work fast enough. Since I don’t want to stop logging when there is too much wood, I bought a new forwarder with a bigger capacity,” notes Girard, who replaced an 18-ton forwarder with one that can handle 20 tons.

Business is going well for this enthusiast entrepreneur, who thinks better years are ahead for the forest industry. But things have not always been that way. Four years ago, the forwarder contractor he worked with went bankrupt when Girard had only a feller buncher.

“All of a sudden, I could not log anymore,” he says. He shopped around to see what he could afford to buy to finish the season and Hydromec found a solution for him. “Hydromec is specialized in forestry equipment. They make a living from forest contractors. So they treat us well,” said Girard.

“For us, a sale is not the end product. It’s the beginning of a long-term adventure. If our client does not make money, we will never succeed,” says Jean Trottier.

Réjean Girard agrees: “I’ve never had such good service. If I am successful today, it’s partly because of them.”

Ponsse’s 9,000th machine
The Girards flew to Finland in October to celebrate the Ponsse team’s 9,000th machine and Canadian Forest Industries was there to meet them. They were hosted at the company’s headquarters in full hospitality – which in Finland means sauna and karaoke in a wooden lodge with spirits flowing freely. The family had the opportunity to visit the factory where their Elephant King was built and to visit a couple of logging sites where they could see the new Scorpion in action alongside various other Ponsse models as well. They were invited into the cab to feel how smooth and easy the Scorpion is to manipulate.

The Scorpion was designed to keep the operator comfortable and alert longer. The boom was moved to the top of the machine – reaching over the cab and out of the operator’s line of vision. Built with a triple-frame structure with a low axis point, the machine travels easily over bumpy terrain while maintaining a level cabin and smooth ride.

First presented at Elmia Wood in Sweden last summer, it has been well received, according to Jean Trottier, president of forestry equipment specialist Hydromec. “With better performance and comfort, this eight-wheeled harvester is more stable and it’s adapted to the rough conditions we have in Quebec,” he says.

Bertrand Tremblay, owner of Forestier Marcel Tremblay et Fils, based in St-Eugène-d’Argentenay, about 300 kilometres North of Quebec City, has bought the first Scorpion in Canada. He will receive it in fall 2014.

Ponsse Elephant King
The Ponsse Elephant King has a 205-kilowatt engine, is able to haul 20,000 kilograms and includes the company’s most powerful loader, the K100+. It comes with an EcoDrive application that monitors the machine’s load and fuel consumption on a function-specific basis and the cabin is designed to obtain the best ergonomics to keep the operator comfortable throughout the shift. 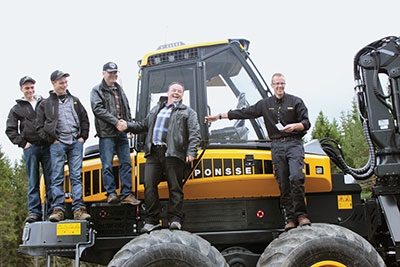 Girard and his sons get a chance to see their new Elephant King forwarder at a ceremony at the Ponsse factory in Vieremä. For some logging contractors
Print this page