Business is booming for AM Ludwig Saw Shop in Thunder Bay where three generations of Ludwig filers are keeping saws sharp for mills across Northern Ontario. 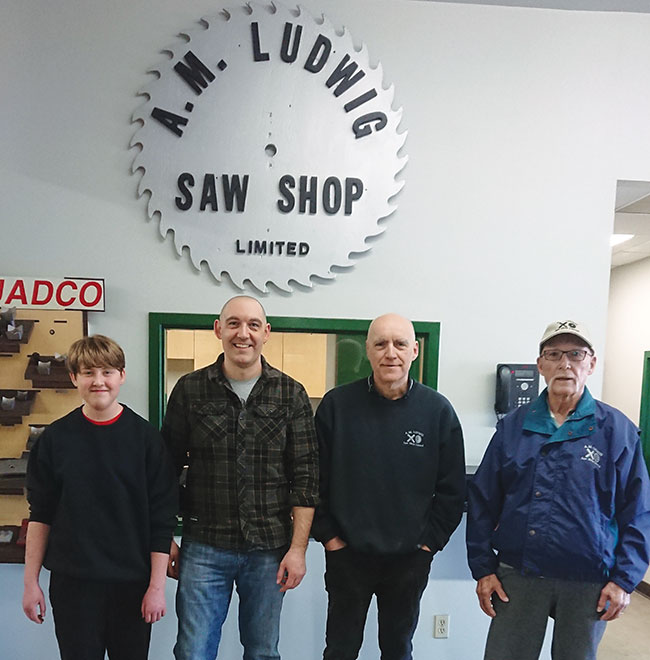 With great grandson Trent in the picture, four generations of Ludwigs stand under the sign for the half-century-old family business. Photos courtesy AM Ludwig Saw Shop.

AM Ludwig Saw Shop in Thunder Bay, Ont., regularly sees three generations of Ludwig filers milling about the shop at any given time. Going on 91 years old, founder Andre Martin Ludwig may not be working any tools these days, but he’s still in three times a week to make sure “the four walls are still standing, and the roof is still on,” says son Pat Ludwig with a laugh.

During my interview with Pat on a Wednesday morning, Andre happily chimed in to correct timelines and comment on the way things were back in the ’70s when he ran the shop in the backyard of his Thunder Bay home.

Andre’s sawfiler ticket was issued from a filing school in Duchesnay, Que., in the early 1960s. His first job as a filer was for Dubreuil Forest Products in his hometown of Dubreuilville, Ont. – a three-hour drive North of Sault Ste. Marie. The Ludwig family of seven then moved to Thunder Bay and Andre became the head filer at Northern Wood Preservers. Both mills are now closed.

Pat, 62, describes his father’s decision to open his own shop as a logical step to keep filing work in town. “He noticed while he was working that more and more work was being sent out of Thunder Bay back to the factories to get reconditioned,” Pat says.

Andre first asked Northern Wood Preservers for permission to do the work in their filing room after hours. As more and more work came in, in 1975, Andre set up a garage in his backyard. “He started hammering saws and set up a small filing room,” Pat says.

After five years in the backyard, the growing company moved to operate out of Port Arthur Lumber in Thunder Bay, and later opened their own shop on Carrick Street. Andre ran the company in that shop for 12 years before expanding in 1997 to their current location, just down the street.

Pat’s apprenticeship was done at Northern College in Timmins, Ont., and he received his ticket in 1982. He worked at Great West Timber in Thunder Bay for 10 years before joining his father in the saw shop. Pat’s brother, Bruno, is also a sawfiler and joined his father’s business in 1985. He left the business in Pat’s hands about eight years ago.

“I’ve been running this place for 30 years,” Pat says. “It’s a third-generation business. My son, Scott, and his wife, Katrina, are taking over the business.”

Scott is a truly home-grown filer, raised in the shop and working there and in local sawmills since he was 16. Taking advantage of the wealth of experience and knowledge from Pat and Andre, Scott continues to learn and grow as a filer. 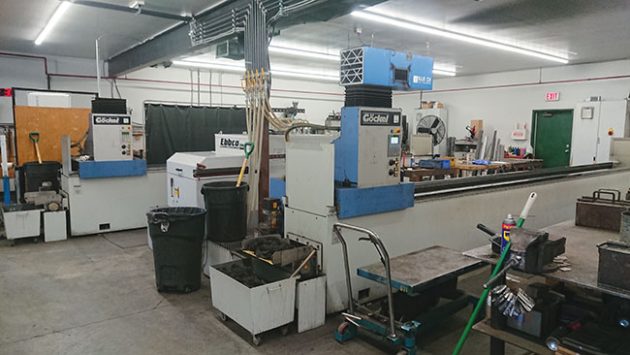 For the past four years, the AM Ludwig Saw Shop has been investing in automation to keep up with an increasing workload.

In 1985, Andre designed and patented a carbide double point slasher tooth, which he called the F2000. Andre eventually licensed the patent to a large saw filing equipment manufacturer. “This tooth is world-wide now and he held the patent for many years,” Pat says. “That’s how the shop started to build up. It started getting a really good name and people knew the product was coming out good.”

AM Ludwig Saw Shop now employs eight people, with five filers and three administration staff. Their core customers include most sawmills in northern Ontario and Manitoba. Besides lumber mills, they are working with the saws and knives from OSB plants, Trus-Joist plants, and pulp and paper facilities as well as harvesting outfits to replace or repair feller buncher, processor, or harvester head teeth.

“In our saw department, we go from a 72-inch slasher saw all the way down to a 10-inch saw. We do a fair amount of spline saws, and a bunch of trim saws,” Pat says. “We also maintain our own metal cutting bandsaw blades.”

Outside of the forest industry, the Ludwig filers regularly sharpen break presses for the steel industry in northern Ontario.

“They are all starting to send us more and more work. We have the equipment here and the people to handle it. There is just too much shortage of labour here in northern Ontario and Manitoba,” Pat says. 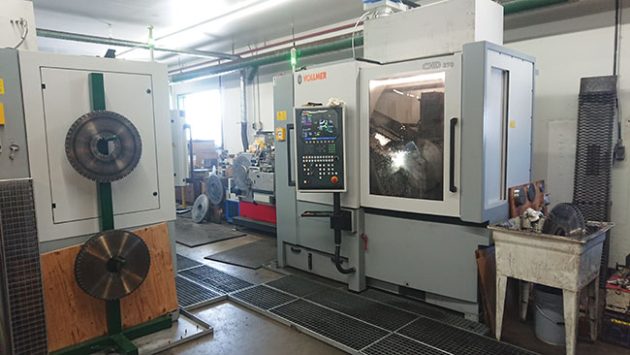 For the past four years, the saw shop has been investing in automation to keep up with the expanding workload.

The investments began with two 65EL Gockel knife grinders. Their next big purchase was three Vollmer CHD 270s as well as a Vollmer CHF 270. “We really like the new technology from Vollmer,” Pat says.

The shop’s new acquisitions round out with a Kirschner LK Pro auto-tipper from Simonds International. They are also running an older Akemat F210 side grinder. “We really like the Akemat. It just keeps working – it never breaks down,” Pat says.

The harvesting equipment side of the filing business is still manual labour, tensioning and hammering the large slasher saws and reinstalling carbide tips the “old-fashioned way” with a torch.

As with any saw shop or filing room, the case for new, faster machinery is growing. Pat says they are eying robotic equipment.

“As more and more business comes this way, it’s getting harder and harder to get qualified sawfilers to work for us. So, we have to go with automation. We are forced to do that.”

One hitch to that plan is the backlog of machinery orders, felt across the wood products industry and beyond. Pat says they are looking at up to a year to receive new machines.

“With the price of lumber being quite high right now, a lot of mills are modernizing their equipment also so there’s a backlog all over. It’s really tough to get things around here,” he says.

“We got lucky. We got all of the equipment in place now that we can handle the customer volume. We probably have a bit extra capacity if needed.” 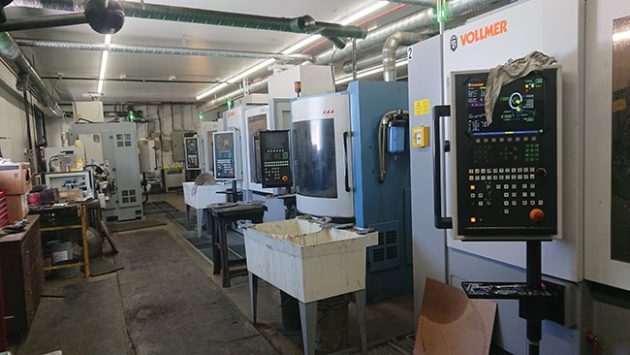 With the labour shortage most keenly felt in northern and remote communities, sawmills in Northern Ontario are among the many employers desperate for skilled workers.

When it comes to keeping quality filers on staff, Pat considers the saw shop to have one major advantage over other employers: “What they love about here is that they don’t have to work shift work. That’s the biggest advantage we’ve got over everybody. We work six days a week at the shop here. It’s usually Monday to Friday and sometimes a weekend, but it’s strictly day shift.”

Most of Ludwig’s customers are now contracting all their saws out rather than keeping a fully staffed filing room in-house. The mills still need the odd filer on shift to keep up with saw changes, but they can run with fewer people than ever before, Pat says.

And Ludwig Saw Shop is happy to help out their customers when they’re in a pinch.

“When the sawmills run short, we’ll send our people to their mill to help them out. All of our guys get mill experience, and we help our customers. Bruno and Scott have done many shifts for mills in the area because they are short of people,” Pat says.

As Andre chimed in to put it: “As long as my customer makes money, we make money, and this is the way it has to work these days because nobody is going to be in business otherwise.”

With no end in sight to the labour shortage, Pat is expecting their saw shop to continue expanding and he’s poised to scale up in order to meet the demand. And if 90-year-old Andre is any indication of the Ludwigs’ love for filing, the AM Ludwig Saw Shop has a lasting future ahead of it.

Does Pat see himself in his 90s coming to the shop to check on things and make sure the roof is still on?

“Probably!” Pat says. “I enjoy what I’m doing. I have great customers. I’ve been in it now since I was 19 years old. It’s in my blood and I’m still here. Sure, you have some tough days once in a while, but 99 per cent of the time it’s really good days and, for me, I enjoy talking to people, doing my job, and keeping people happy.”