A productive and sustainable forest industry around Ontario’s Algonquin Park dates back more than a century, and for most of that time the McRae family has been involved in the local lumber business. Over the years, the mill and company names have changed, production operations have moved to new locations, minor updates have been made to equipment, and business directions have been altered to meet market demand. But some things have remained constant, and that includes the McRae family’s commitment to sustainable forestry, maintaining its ownership of the business and providing jobs for the local community. 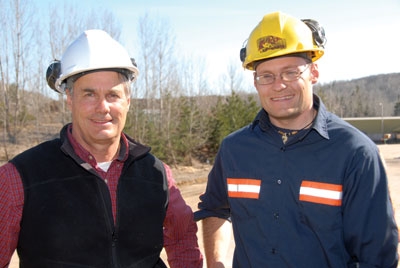 In the early 1900s, John Duncan McRae, the son of Scottish immigrants, was the first family member to be involved in the forest industry. Today, one of his great, great grandsons is following in his footsteps and the footsteps of three other generations of McRaes that have made their living from the forest. Jamie McRae, who is in his early 30s, says he basically “grew up in the business” with his father Robert and his uncle, another John McRae, passing on the 30 years of knowledge and experience they have each acquired during their shared leadership role at McRae Lumber.

“It all started when my great, great grandfather operated a sawmill, a grist mill, and a power utility on the Bonnechere River in Eganville, Ontario,” Jamie says. “He used the river water for power until a major fire in 1911 destroyed half the town, including the power utility.”

It was John Duncan’s son and Jamie’s great grandfather, John Stanley Lothian (JSL) McRae, who continued the family tradition, making the 80-kilometre trek west from Eganville to the southern reaches of Algonquin Park, near Whitney. He started out as a jobber, cutting pine for the Mickle & Dyment Lumber Co., but when the pine started to run short, he bought the Mickle & Dyment mill and began to cut and saw hardwood.

During JSL’s time, sawmills moved to where the timber and rail lines were located as the timber came out of the woods by horse and water and the lumber was shipped out of the mills by rail. There were five sawmills in the McRae family history before they built a more permanent mill on today’s site in 1972. That mill was designed to handle lower-quality hardwood, but following a fire in 1983, a new mill was built a year later. A high-quality band mill that had been moved to the site from Rock Lake in 1979 wasn’t destroyed by the fire. Today, McRae Lumber cuts wood for flooring, cabinetry and other higher-end uses, but also cuts a substantial amount of industrial grade products. They mainly process maple, but do run some yellow birch and some softwood species such as white pine and eastern hemlock.

The other main products they produce at McRae Lumber are chips for the pulp and paper business and wood fibre for particleboard and medium density fibreboard (MDF) production. “By volume, we end up with about 70% of our wood in the form of residuals,” notes Jamie. “That’s either chips, sawdust or bark,” he explains.

“The markets for residuals are poor right now,” adds John. “Long term, I think one of the biggest challenges for us is that we have lost some of our participants in the pulp mill business. It’s the users of the sawmill residuals that are falling by the wayside and with less customers out there for our residuals, and the declining markets everyone is facing right now, it’s going to be difficult for the foreseeable future.”

With the closing of a number of pulp, paper and panel mills in close proximity to Whitney, John says they have been forced to deliver further afield, and even then, he adds with concern, that these orders are only coming their way because “the traditional suppliers of residuals to these plants are shut down right now.”

But despite the challenges the McRae Lumber Company is currently facing, they continue to run one shift a day, five days a week. “We are small and we are in sync with the forest and the land around us and that helps us right now,” John says, while adding that it is important for them to keep the 75 people working who rely on the mill for their income.

Mill Flow
As for the mill structure, “it’s actually two individual mills on the one site,” Jamie explains. “We haven’t really changed that much over the years. We just keep tinkering with it and we have updated some of the equipment in the past to make it more productive and less labour intensive with a higher yield.” 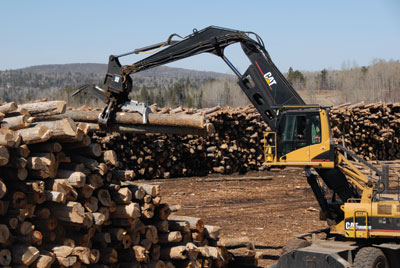 Mill flow starts in the log yard where a pair of relatively new Caterpillar 325 loaders with the forestry configuration and Rotobec grapple-style heads unload incoming log trucks. The logs are either stored in inventory or hot loaded on to the mill’s slasher deck. There’s no high-tech scanning at this station. An operator such as Robert Cannon, who has been one of the main operators on the line for over 35 years, makes the decision as to whether a log is a saw log, a bolt, or a pulp log.

Saw logs are kicked out right away and are delivered to the McRae’s band mill where they go through a circa 1950s Hosmer peeler that was transplanted from one of the company’s older mills. Next, they are dropped onto a customized carriage built by Truway Machinery Manufacturing Equipment in Combermere, Ont. The carriage is equipped with a 6 ft. double cut Forano (now USNR) band saw head rig that breaks them up into cants or slabs.  The slabs are directed to a Forano horizontal resaw and then to a PHL edger while the cants go to a Forano vertical resaw. “Much of the equipment has had multiple modifications over the years with the most recent upgrades in the band mill being a waterfall system from Truway and new controls and electrics from Welk Electric in Killaloe, Ont.,” notes Jamie, adding that all of the products from the band mill “end up at the Canadian-style trimmer before being directed down the boardway.” 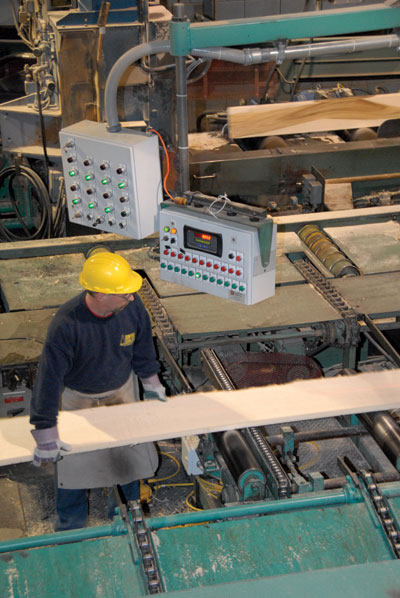 Back at the slasher deck, bolts and pulpwood go to a Thunder Bay, Ont.-built Dingwell Deal processor where they are peeled. A Serco loader then directs the logs to the appropriate lines. Pulpwood is delivered to a 96-inch Nicholson chipper followed by a series of chip screens and conveyors that deposit the chips on the mill’s chip pile for delivery to customers. Bolts are sent to the scragg mill where an older model headrig with dual thin kerf 42-inch circular saws creates cants and slabs. North American Sawmills built the carriage and carriage motors on the headrig, but like much of the equipment in the McRae mill, the headrig has seen a number of modifications over time. The cants go to a single circular vertical resaw that was built by Truway, while the slabs are sent to a modified PHL edger/resaw. All products from the scragg mill then go through a multi-saw trimmer that cuts the boards to lengths ranging from 40 inches to 10 ft., depending on the product mix, and then to the boardway where the products are graded, sorted and stacked for shipment.

Markets for the higher-grade products from McRae Lumber primarily end up in Canada and the U.S., while the lower-grade materials are mainly shipped to southern Ontario’s manufacturing belt. “We run pretty standard hardwood mill sizes,” Jamie adds. “Mainly 40 in. to 16 ft. in length and up to 6 in. x 8 in. dimensions.”

For incoming logs, the McRaes handle about 130,000 to 150,000 cubic metres annually, which yields between 12 and 15 million board ft. of solid wood products and about 100,000 plus tonnes of chips and other residuals.  Most of the logs come from Algonquin Park where harvesting is handled by contract loggers and is carefully managed by the Algonquin Forest Authority, which John explains is a Crown corporation that oversees and controls all timber harvesting in the park. “The forestry practised in the park is by far, bar none, some of the most progressive and least intrusive harvesting that you will find anywhere,” John says. “They are definitely keyed to sustainability and protection and that is their main priority, even
before economics.”

For Jamie McRae, there is still time for him to learn the ropes while his Dad and Uncle man the helm through the current turbulent times. He’s got a long road ahead of him, but if history repeats itself, the McRae Lumber Company will pull though this downturn in the cycle and Jamie will carry on the family tradition before passing the torch on to another family member in a few decades.