December 2, 2014
By By Guillaume Roy | Translated by Amie Silverwood

Technological improvements in forestry machines are improving performance during harvesting and forwarding. To enter this new techno-savvy millenium, Forestier Prétan invested in a Ponsse H7 harvesting head and an Elephant King forwarder.

Thirty-year-old Francis and 39-year-old Dave Prévost are part of a forestry crew that relies on a healthy forest industry. Born in the forestry town of Girardville near Lac-Saint-Jean in Quebec, their father nurtured their love of the forest. He launched the family business in 1985 with Clermont Tanguay and saw his sons take over the business.

Equipped with aging machinery, the young team opted for new Ponsse technology. “The H7 harvesting head is well made. There are fewer hoses coming out of the head and there is less leakage. Plus, cuts are always 100 per cent accurate,” Francis stresses. His H7 head is mounted on a Direct harvester.

When harvesting, quality is of topmost importance and precise measurements make all the difference when it comes to bonuses. “We don’t need to get out as often to verify the lengths. With this technology, we’re sure to raise our productivity,” he adds. But each log is different, so it’s difficult to pin down how much of an improvement they’ve seen.

Dave and Francis Prévost decided to replace their old forwarder that served them with over 20,000 hours of operation with an Elephant King. It was last January when Hydromec delivered their new toy and by May the forwarder had already clocked 550 hours of operation. They’ve found it comfortable and it runs without much maintenance. But why choose Ponsse? “It’s a powerful machine with excellent service to back it up,” Francis Prévost comments.

For these young entrepreneurs who harvest between 60,00 to 65,000 m3 annually for the Girardville Forestry Cooperative (CFG), the H7 head is adaptable. “It doesn’t slow down even for really large trees. Even in the hardest conditions, it does the job well,” Prévost comments during a Ponsse demonstration in the forest of Dolbeau-Mistassini in early May. They were harvesting trees on a private woodlot belonging to Michael Bouchard, who plans to turn it into a blueberry field. The grounds consisted primarily of large jack pine and spruce of more than 30 cm in diameter, plus some birch and trembling aspen.

A few weeks after the demonstration, Forestier Prétan’s team of five is working north of Lac-Saint-Jean in a forest of black spruce, jack pine and trembling aspen. In this region, there’s a lot of large timber bound for the CFG Tradition mill that is equipped for oversized wood and owned by the co-operative. The majority of the normal-sized wood for that region is cut at 21-foot lengths and bound for the Arbec sawmill, which is partially owned by the co-operative. A small percentage is cut to 16-foot lengths for Resolute Forest Products.

Each week, Forestier Prétan aims to harvest at least 1,400 m3 with its crew. In ideal terrain, like the plantation on which the demonstration took place in May, they’re able to achieve 2,500 m3 per week. Two working teams head to the forest for 12-hour shifts.

Their passion is evident by the sparkle in their eyes when they discuss their careers. “I love the forest. We do well in the woods. We don’t need to make our own lunches and our wives love us more when we return,” Francis laughs. Though the distance between the forest and their families can be great, technology makes them feel closer – they depend on video-enabled apps like Skype or Facetime, he adds.

Continuing to win contracts, maintaining quality and production levels and retaining good heavy equipment operators on the team are the primary challenges the company will face over the coming years.


December 2, 2014By By Guillaume Roy | Translated by Amie Silverwood 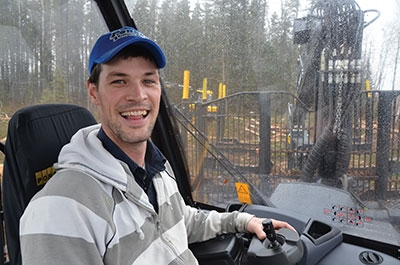 Francis Prévost poses in his new toy Technological improvements in forestry machines are improving performance during harvesting and forwarding. To enter this new techno-savvy millenium
Print this page