Fourth generation BC remanner Don Backs has always liked red cedar – the wood his company is known for cutting – for its natural beauty, durability, and appeal to high-end users. His company Vancouver Specialty Cedar Products Ltd., though, had limped along in an old hemlock plant he had bought earlier with equipment geared toward cutting lamstock for the Japanese market.  So, for the past five years, Backs had been working on a way to revamp his Surrey plant, located just off the Fraser River, without too much downtime. 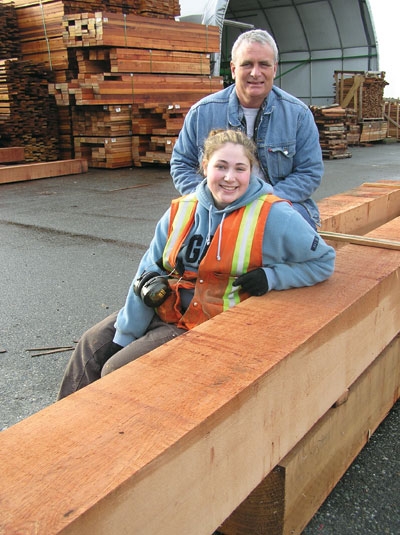 Don and Carmen Backs. Fourth generation BC remanner Don Backs has always liked red cedar – the wood his company is known for cutting – for its natural beauty

Last December, years of planning paid off. In 18 days, Backs’ and crew tore out the old equipment and installed the new plant’s components, equipment, and transfer tables. “On the 18th day we were up and running,” says Backs.

The conversion was an in-house project from the outset, with Backs drawing upon the knowledge of generations of remanning to know what would work. In the 1950s, grandfather Lawrence had a sawmill and planing operation in the Kettle Valley area, and a 1910 photo of great-grandfather Peter operating a circular headrig hangs on the wall of the Surrey office.  Today, Backs’ new plant sits on three acres and before the rebuild, the plant churned out an estimated $20 million in sales and produced 13 million bdft of clear or tight-knot product bound mostly to the US. This included beveled siding, V-joint, and kiln-dried trim.

“We don’t do low-end cedar lumber, and we are not competing with the larger plants,” says Backs, who sees his specialty product going mainly to higher-end homes. The new equipment will further enhance Backs’ ability to produce more product, but the focus of the design is adding value.

“We designed the plant ourselves using a CAD program (supplied by Solid Works),” says Backs of the new plant design. Wife Barbara, a draftsperson, helped with the drawings, while input also came from plant designer Marius Krack, who says the design’s goal is “processing and creating high-end product from high-grade cedar.”

Refined Gear
Backs says the rebuild is using proven basics in wood handling.  “We haven’t used new technology, just refined old technology,” he says, as he sourced and installed time-tested brand components, such as a new 48-inch, horizontal Stenner resaw, and a refurbished 1952, 15-inch Stetson Ross 6-10-A1 planer bought from a Kootenay operation. 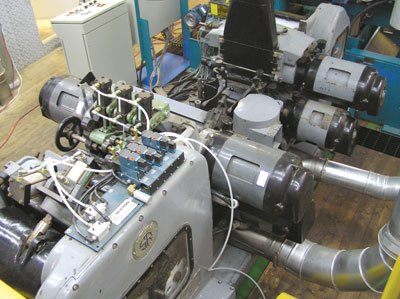 The in-house design combined with a strong reliance on ageless technology has given Backs a plant that is functional and efficient. The plant’s strongest feature – and critical when dealing with raw material that sells for up to $4,000 a thousand – is that “there is no iron stain” resulting as the cedar travels through the remanning process. Plastic chains from local supplier Cam Chain and plastic tables ensure that no dark staining occurs on the finished product.

Also, Backs now has the ability to take raw material and downstream it to a market-ready and shippable product in one step. In the old plant, cedar had to be moved manually between the various machine centres. The system was labour intensive and time consuming, as up to three transfers could occur. Finally, the trimming capabilities of the reman line have been enhanced, including the ability to pre-trim and re-trim material.

Backs says the crew did “80% of the work in house” which involved the design, construction, removal of the old line, and construction of the new one. A private contractor supplied some of the remaining 20%.  The plant’s configuration involves an existing large covered area with two new buildings inside to house the manufacturing and grinding activities. The wood flow enters on one end of the covered area, moves sideways through the manufacturing site, and emerges to move down towards the rear of the covered main area. While the covered area existed before the revamp, it has been added to.

The fabrication work started 14 months ago with Backs able to use one of the three dry kilns on site. The other two Nyle dry kilns continued operating with each having the capacity to hold 90,000 bdft. “We built the components and pre-wired and pre-assembled them,” he says. “Everything was done away from the main building, so it did not interfere with production.” The units were pre-tested, and then moved into position at the site.

Attention to detail included a new grinding room, a bright, open area where Backs is installing 20 overhead lights to ensure that the planer men have the lighting require. And, it’s an area where Backs hopes to do some experimenting with different cutting configurations.  “We want to try new knife angles and tip configurations on the knives,” he says, adding that a new grinder is planned downstream for installation. The new grinding room is equipped with all the right gear – a Stetson Ross grinder, an 8-ft reform flat-knife grinder, and a Weinig profile grinder – as well as amenities such as a restroom, so that employees can stay close to the area.

An interesting feature of the planer/resaw building is the spongy acoustic material used to insulate the structure’s complete interior. It’s the same material that is used in professional sound studios, says Backs. The reason for its installation is that the plant sits next to a housing complex – complete with a playground, an indication of how residential areas have slowly spread toward industrial areas in Greater Vancouver.

New Generation
The new plant’s infeed deck now has the ability to handle two large units of lumber at one time, lifting to the in-feed table. It also has the ability to reverse direction in case material has to be removed, points out daughter Carmen Backs, a Simon Fraser University business administration student now working part time in the mill. Once through the infeed deck, the wood goes onto a 20-ft-wide singulating deck, where pre-trimming can be done before material feeds into the planer.

While the planer is an older machine, Backs says he sourced it because it is known to be a reliable and solid (cast iron) machine that is not prone to be affected by vibrations from the planing process. It thus provides a quality finish. Stetson Ross also uses a quick-change system on the planer, so that knives can be kept sharp. Progressive Machine Industries provided advice on the planer set up, and supplies parts and tooling on a regular basis. The new Stenner resaw has the ability to provide a variety of tapered or beveled enhancements to the wood for exterior siding or interior paneling, providing a finished product.

To house the expanded outfeed, the company has added 2,500 square feet of covered area to the main building to shelter the outfeed, trimmer, and green chain. The area will also be used for lumber packaging. The outfeed table has been equipped with trimming capacity, but also uses an old-fashioned Swede lumber puller system for re-trimming. The puller systems allows for the material to be kicked out before the green chain, carouselled through a trimmer, and then back to the grader, all managed by manual decision making. 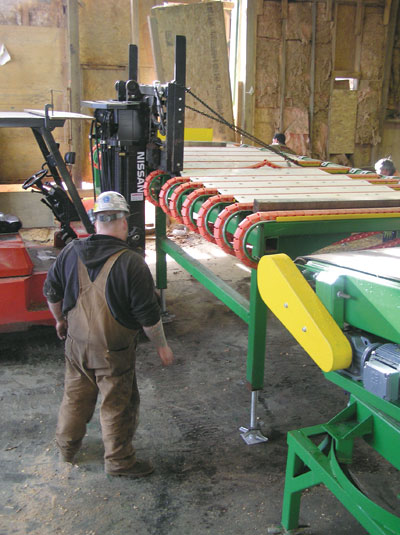 One of the unusual problems that Backs has had to deal with during construction is that the area around the Fraser River is slowly sinking. Carmen points to older plant walls built in 1991, where the ground has sunk down as much as two feet. As a result, all the infeed and outfeed tables have been constructed with adjustable legs so that they can be heightened or lowered to ensure an even surface for the lumber flow.

The new plant’s changeover, originally thought to take only a week rather than 18 days, still happened quickly over the Christmas and New Year period. Backs is pleased with the conversion. “To go from an empty building to a complete functioning production line in only 18 days is something amazing,” says Backs. “Anyone who has tried to assemble and run a line of this size (185-feet total) will agree.”

Backs brought in a photographer to do time-lapse photos of the conversion so that it could be placed on You Tube on the Internet. Readers who want to see the conversion can go to the You Tube website and type in the company’s name.