April 12, 2018 - FEA Canada/WOOD MARKETS’ 2017 annual survey of “top 20” Canadian and U.S. lumber producers featured mixed production trends despite a runaway lumber market in the U.S. With few mill acquisitions, almost all of the production gains arose from improvements at existing mills. Of the top 40 companies, eight in Canada and six in the U.S. recorded production declines — not the trend you’d expect during a time of near-record-high to record-high lumber prices. 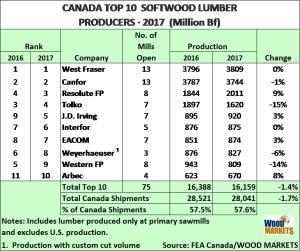 These and other industry highlights were recently released in the March 2018 issue of WOOD Markets Monthly International Report. The team at FEA Canada/WOOD MARKETS, Vancouver have conducted this survey annually since 1997.

The top 10 Canadian producers have seen their shipments grow at a slightly slower pace than the overall Canadian industry since 2014. In 2017, the softwood lumber shipments of the top 10 decreased marginally versus a larger decline in Canada as a whole (-1.4% for the top 10; -1.7% for Canada). The drop in Canadian shipments is a function of many factors, but the implementation of import duties to the U.S. in early 2017 was one that caused Canadian companies to re-evaluate their markets and mills.

Given the import duties, Canadian mill investments in the U.S. South are proving very strategic due to ample timber supply in the region and high sawmilling margins (the result of subdued timber prices due to oversupply). There was one notable U.S. acquisition in 2017: West Fraser’s purchase of Gilman Lumber’s six sawmills. Currently, the collective U.S. mill count of West Fraser, Canfor and Interfor (45 mills) allows their sawmill operations to enjoy excellent diversification on both sides of the border.

The top 5 Canadian producers in 2017 were ranked as follows:

The top 10 firms produced 52.5 per cent of all U.S. softwood lumber shipments in 2017 (versus 52.0% in 2016). With import duties on Canadian lumber, U.S. sawmills enjoyed higher prices and strong financial results. A flurry of new-mill and/or expansion announcements has occurred recently for the U.S. South, signalling an opportunity for more sawmill investment (some 4.5+ billion bf of announced capacities from 2018 through 2020) to take advantage of ample timber supplies and high lumber prices).

The top 5 U.S. firms produced 12.5 billion bf, representing 36.9 per cent of all U.S. lumber shipments and up 4.9 per cent from 2016. Three more U.S. companies maintained the one billion board foot level in 2017: Canfor, Hampton and Idaho Forest Group (with updated production figures from our March 2017 WOOD Markets Monthly Report).

The wild card for 2018 is the extremely high level of U.S. lumber prices (inflated partly by the imposition of U.S. duties on Canadian lumber and also because of only small increases in North American lumber output). High prices attracted a 50 per cent increase in offshore exports in 2017 and there are a dozen new sawmill projects planned for the U.S. South. As a result, U.S. lumber production will be expanding, but at some point, this new supply (and imports) will put negative pressure on prices. This will be discussed at length during FEA Canada/WOOD MARKETS’ Global Softwood Log & Lumber Conference, to be held in Vancouver May 9–10, 2018. The complete Top 40 List and further analysis are available to subscribers of WOOD Markets Monthly International Report. 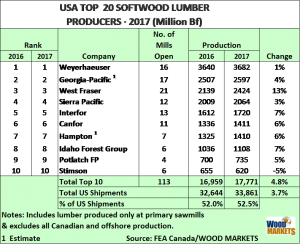