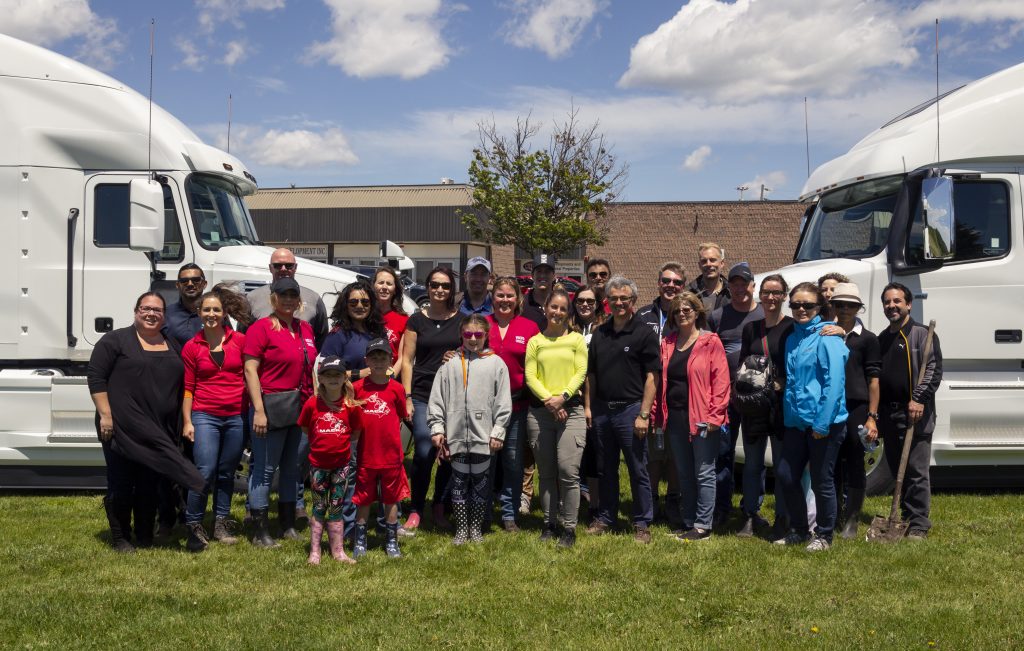 The presentation of the Minister of Veterans Affairs Commendation to Corporal Nick Kerr highlighted what the campaign has come to mean to those that that have served in the Armed Forces. Corporal Kerr served in Afghanistan in 2006. Over the last three years, he has volunteered and attended over 15 Highway of Heroes Tree Campaign events, sometimes driving for hours to be able to participate and, in this case, flying out from Edmonton to attend.

“Since my very first planting, I’ve found a sense of closure from the pain I had when I lost my friends, helping to heal some of the non-visible wounds I brought home from Afghanistan in the process,” said Corporal Kerr. “I prefer an army of trees standing at attention over more stone cenotaphs. I was a pallbearer for eight friends I lost, and every time I plant a tree, I think, ‘That one is for you, buddy.'”

“It was an honour to join Prime Minister Justin Trudeau today to announce $2.9 million in support of the Highway of Heroes Living Tribute,” said Minister MacAulay. “This project will serve as a reminder for all Canadians to remember the service and sacrifice that Canada’s veterans and fallen heroes have made for our country. With over $10 billion invested in our veterans and their families in the last four years, we understand just how important it is to ensure they have the support and respect they deserve.”

“I am very proud of the collaboration between Volvo Trucks, Volvo Financial Services, Mack Trucks, and Volvo Construction Equipment in support of the Highway of Heroes Tree Campaign,” said Paul Kudla, Managing Director, Canada – Volvo Trucks Canada. “This is the first time that Volvo Group in Canada has coordinated our efforts as a team in support of a cause. We feel passionate about working together with this organization for two reasons, as it reflects one of the Group’s core values; care for the environment; and the importance this highway corridor holds for our customers, as they travel and work on it daily.”

“The support we receive from the Government of Canada puts our campaign on an indisputable trajectory toward success and the completion of our living tribute,” said Mark Cullen, Chairman and Co-Founder of the Highway of Heroes Tree Campaign. “Through the support of corporate partners, like the Volvo group, as well as Canadians from coast to coast, we’ll be able to match every dollar that Veterans Affairs will provide with over two dollars from corporate, private and other funding sources. And when you consider the environmental benefits of two million new trees – one tree for each of our Armed Forces heroes – it’s easy to see how this is a good investment for all Canadians.”

Following the ceremony, members of the Canadian Armed Forces, Military Veterans and volunteers from the local community joined forces to plant 300 more trees in support of the Highway of Heroes Tree Campaign. Just one week following the 75th anniversary of D-Day, these trees were planted at Intrepid Park, the former site of Camp X and legendary secret paramilitary training installation for covert agents during the second world war.