The thought of China is putting a smile on many faces of those with a stake in Canada’s forest products industry. At the same time as 2009 proved to be another bad year for sales to the U.S., the Chinese market quickly developed into a booming export opportunity for lumber and other value-added wood products.

Roofing components are a big market in China for Canadian wood products. The thought of China is putting a smile on many faces of those with a stake in Canada’s forest products industry. At the same time as 2009 proved to be another

Forestry Innovation Investment Ltd. (FII), a provincial agency that promotes British Columbia’s forest practices and products around the world, states that B.C.’s annual lumber sales to China have nearly tripled, from about $113 million in 2007 to more than $327 million in 2009. Because Chinese expertise and interest in wood construction is growing at the same time building codes are changing, the future looks bright as well. Exports of B.C lumber to China are expected to grow from 10% of the province’s production in 2009 to an estimated 20% by the end of this year.

The Chinese population mostly consists of people aged 30 to 45 years old who are settling down, and the country’s middle-class spending power is growing. At the same time, recent earthquakes have caused the government to take a second look at alternatives to traditional concrete buildings, which don’t withstand quakes very well. Potential export market opportunities abound for Canadian wood and wood-based materials that can be used to construct and renovate buildings for both China’s affluent and not-so-affluent.

However, while some excellent market development progress has been made, it’s been hard-earned. “It takes a tremendous amount of work to introduce new building systems in China,” says Barry Ford, general manager at Canada Wood (CW), “but over the past 10 years, we’ve achieved significant results.” Canada Wood, with two offices in China, three others in Asia and two in Europe, has the goal of expanding offshore wood export opportunities. “Codes and standards and related regulatory details don’t yet exist for wood-frame construction in China, so a lot of our groundwork has involved working with government to create these,” says Ford.

“I would characterize the code situation as pretty good, insofar as there will be a fairly comprehensive system in place soon,” says Paul Newman, executive director of market access and trade at Council of Forest Industries (COFI, a non-profit organization representing 67 member companies working to revitalize the B.C. forest industry) and a CW director. However, Newman warns that “it will be unduly restrictive in a number of areas and will require extended involvement on our part to attempt to lever favourable relaxations.”

As much as changing codes is critical, there is also significant concern about enforcement. “Building inspections are few and far between, and just because it is covered in a code does not mean that it will happen in practice,” notes Newman. Canada’s FPInnovations senior research scientist Chun Ni agrees the issue is serious. “Trusses and engineered wood products are being used in China, even though they are not accepted into code yet,” he says.

Spotty building practices are exactly what the Canadian forest products industry wants to avoid, says Ford. “There’s not yet a great deal of expertise – to make sure buildings can withstand the elements by using wood siding and overhangs, for example,” he observes, “so we are training experts who can then go to job sites and educate construction workers on correct building systems.” 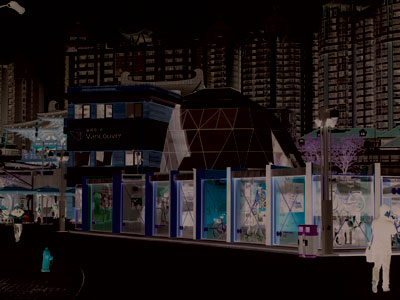 A big step forward came in late May, when Treasury Board president Stockwell Day and the three Western premiers attended the Shanghai World Expo and helped the city launch its new wood-frame building code. (B.C.’s Gordon Campbell, Alberta’s Ed Stelmach and Saskatchewan’s Brad Wall have also opened a joint trade office in Shanghai.) FPInnovations and CW are currently working with the Chinese code committee on the design, fabrication and installation of wood trusses. COFI is actively throwing support behind the use of wood trusses for re-roofing, as well as construction of affordable housing. Its members are exporting lumber, engineered wood products, flooring, furniture and more.

In addition to working to change codes and educate the Chinese construction industry, Canada Wood has also built several demonstration projects, which Ford considers an excellent way to show what can be done. “There are many types of demonstration buildings the Chinese want to copy,” he notes. One of the initial projects was a six-storey “walk-up” building (no elevator), a very common type of housing unit in China. “There are many of these with flat roofs that need re-roofing, and we’ve shown them it’s economical to install sloped roofs made of wood instead of steel,” says Ford.

The recreational home sector is picking up very quickly in northeastern China, and large developers are showing interest in wood-framed villas and townhouses in the Yangtze River Delta. There is also potential in the construction of high-rise residential buildings with wood-partition walls, and buildings with concrete bases and wood-constructed floors on top, as well as for adding extra wood-constructed storeys on top of existing structures.

At the same time China is nurturing new hope in Canada’s forestry sector, some nagging concerns remain. The implosion of the U.S. lumber export market due to drastically reduced housing starts from 2006 onward has made apparent the peril of putting all of the industry’s eggs in one basket. When asked if this scenario is being played out again with China, B.C. Minister of Forests and Range (MFR) Pat Bell is philosophical. “You have to be focused to grow,” he says. “You can spread your marketing dollars and focus on many things, but you’re not going to get very far that way.”

Private companies seem to be taking a different stance. “We don’t plan to make China the only focus of our business by any means,” observes Chris McIver, vice-president of lumber sales at West Fraser Timber. “We see China as a growing market, but we do a tremendous amount of higher grade business in Japan, and the U.S. and Canada will continue to be the majority of our business.”

Andrew Casey, vice-president of public affairs and international trade at the Forest Products Association of Canada (FPAC), agrees that “the U.S. market will always be our largest market because it’s a close-by wood-building culture. However, if we move more lumber to China, we ease the domestic market and keep better pricing.”

“Our industry continues to be diligent in global diversification, and this is part of that diversification,” remarks Dave LeFebvre, a spokesperson for Canfor Corporation (head office Vancouver, B.C.). “We very much believe that China’s market will grow. There are multiple uses for the lumber we provide to China, everything from industrial concrete forming, pallets, and crating to single and multifamily residential construction as well as repair and remodelling.” Canfor concurs with Minister Bell’s vision that the Chinese market potential for B.C. wood products will exceed four to five billion bf over the next five years.

Another controversial issue centres on shipping low-grade/low-cost lumber to China where some of it is remanufactured into high-value products – supporting Chinese jobs instead of Canadian ones. However, McIver doesn’t agree that this practice leads to fewer value-added jobs here. “The medium density fibreboard and furniture industry jobs went to Asia a long time ago,” he says. “There’s a bit of remanufacture of low-grade lumber in China going to Japan, but none really back to North America.” He says West Fraser is mostly exporting dimensional low-grade lumber used mostly in China in concrete forms for building construction.

When asked about this issue, LeFebvre highlights the positive. “Thanks to our access to the Chinese market, we were able to restart a sawmill that had been indefinitely curtailed in Quesnel,” he says. This occurred in June, and involved recalling 155 employees. The mill’s entire output (approximately 200 million bf annually of spruce and fir metric lumber) will be shipped to China. “This is the first time that Canfor has dedicated a mill to one country,” says Lefebvre.

In May, Vernon B.C.-based Tolko Industries Ltd. signed its second major purchase agreement with China National Building Materials, the country’s number one lumber distributor to China’s construction industries (the first was signed in November 2009). The combined deals equal two full mills’ production and support 400 mill and woodland jobs in Quesnel and other Tolko operations. The spruce-pine-fir lumber in a range of grades and dimensions will be distributed throughout China for end-uses such as concrete forms, remanufactured products for the apartment decorating and furniture markets, structural framing, and re-roofing.

For his part, Minister Bell considers low-grade lumber only as a market entry point. “The fastest growing segment of our exports is high-grade construction lumber,” he observes “The use of trusses, partition walls, etc. is growing rapidly.” Although Bell says B.C. lumber exports aren’t tracked by grade, he says he believes (from personal observations and anec-
dotal evidence) that the ratio of low-grade to high-grade exports has moved from 90/10% a few years ago to 70/30% at present.

Despite the positive news around lumber exports to China, some are critical of the recent developments in raw log exports to China because of the lack of valued-added aspects. In October 2009, Coast Tsimshian Resources Ltd. in Port Simpson (owned by the Lax Kw’alaams First Nation) shipped its first load of 25,000 cubic metres of lower-grade hemlock logs, and is following with another expanded order. No doubt sensitive to the criticism, the B.C. government has kept quiet about this, likely because there is little ability to process logs in this region and it would presumably rather keep loggers working than not. However, Minister Bell’s interests clearly lie elsewhere. “My direction and commitment is around lumber,” he says. “If you build the lumber industry, those who choose to can sell logs later if they want – if the logs are surplus-tested.”

As of July 1, B.C. logs can now be shipped year-round into China through two ports, Putian in Fujian province and Taicang near Shanghai, without being treated for pests. Until now, China would only accept untreated B.C. logs during the winter months through Putian, where they are fumigated in massive tarp-covered bunkers. Russ Taylor, president of the Vancouver-based consulting firm International Wood Markets Group, is firmly in support of expanding log sales. “We have some of the lowest cost fibre in the world, but many of the B.C. coast mills are shut down,” he notes. “Log exports will at least put loggers back to work and give China part of the raw material input it needs.”

While those in the Canadian forestry sector are delighted with China’s thirst for our wood, they also realize that more market penetration progress must be made. “The big challenge for the Canadian industry is to develop stick frame construction, showing them the renewable, seismic and energy- efficiency aspects of wood,” says West Fraser’s McIver. “There is tremendous work going on with the B.C. and federal governments in collaboration with industry, but it’s not going to happen overnight.”

Minister Bell is looking further forward – to using sales to China as leverage to strengthen the entire industry. “The exciting thing for me is the growth in the market,” he says. “In 2013, the U.S. softwood lumber deal expires and at that point, I want to have lumber sales to the U.S. and China matched, so that we can go into the negotiations from a strong starting place.”