Aug. 16, 2016 - Nestled on the Columbia River between the Selkirk and Monashee Mountain Ranges in Revelstoke, B.C., is Gorman Bros. Lumber’s Downie Timber. The 60-plus-year-old sawmill is the 8,500-person town’s largest employer with about 300 employees between the mill and its on-site sister company, Selkirk Cedar. 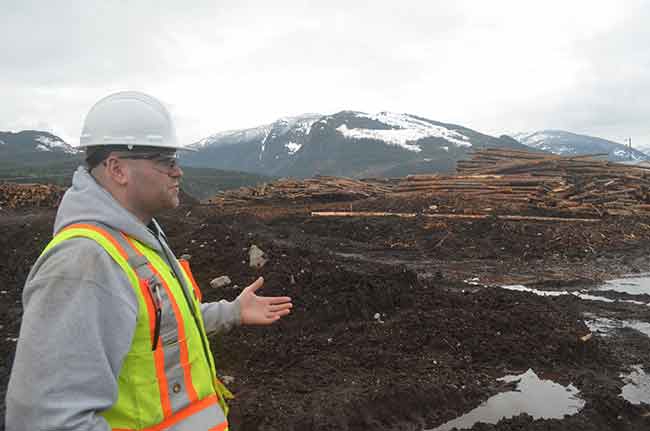 And with an annual sawmill consumption of more than half a million cubic metres of logs across four species, the mill sometimes needs creative ways to find its fibre.
Back in 2007, when several AAC uplifts were granted to help with the mountain pine beetle epidemic, fibre was easier to secure. But those days are history, and there are many mills in the area looking for the same kinds of fibre.

“Our location gives us the highest competitive advantage in the area but there are a lot of mills that are encroaching in, as other AACs go down,” explains Angus Woodman, woodlands forester for Downie Timber.

At the end of March, B.C.’s chief forester Diane Nicholls announced that a new AAC would come into effect for the Merritt Timber Supply Area (TSA) of 1.5 million cubic metres, effective immediately, and it is scheduled to decrease to 1.2 million cubic metres on March 24, 2021.

Then this past May, Nicholls made another announcement stating that the AAC levels for the Kamloops TSA would be 2.3 million cubic metres and decrease to 2.1 million cubic metres, effective May 5, 2021. The decreases are designed to bring the AAC back to levels comparable to prior to the mass harvesting of mountain pine beetle-killed trees.

That said, the decreased AACs come at a time when U.S. homebuilding is in the midst of a slow but steady recovery, and leaves some mills in the southern B.C. Interior competing against each other for fibre that is becoming increasingly more difficult to harvest. And if the U.S. housing economy picks up a stronger pace, the battle for fibre will only become more aggressive. In the Kamloops TSA alone, there are three lumber mills, two chipping mills, two veneer-plywood mills and a pulp and paper mill currently operating.

Add to that the fact that Downie Timber processes four species on site – cedar, spruce, fir and hemlock – and the mill’s woodlands team has its work cut out for them.

“It’s quite rare to run into a four-species mill,” says Alan Smythe, general manager for Downie Timber who has been with the Revelstoke mill for more than 25 years.

The mill currently obtains the 530,000 cubic metres of logs it requires annually through a combination of purchased logs and its own harvesting operations.

Downie Timber’s Woodlands Group is responsible for harvesting approximately 180,000 cubic metres of logs with the remaining logs purchased from other logging contractors throughout the B.C. Interior.

“We’ll buy logs as far west as Fraser Valley and as far east as the Alberta border,” Woodman says.

The mill can have up to 20 different logging contractors supplying them fibre at any given time.

“Our supplier list is very deep and it’s quite complex,” Woodman explains. “Sometimes we have to go chasing cedar.”

“Angus and log buyer Joel Springer shop around to get the right logs into the right program,” Smythe adds.

Another way Downie Timber has been able to secure its fibre is through a municipal partnership with the Town of Revelstoke.

The mill has a license to purchase fibre through the Revelstoke Community Forest Corporation (RCFC), which owns and operates a tree farm license north of Revelstoke with an AAC of 90,000 cubic metres.

About 40 per cent of the sawlog volume is supplied to Downie Timber, while the remaining 60 per cent are sold at auction – with many of those logs also purchased by the Revelstoke mill.

Downie Timber also rents out a satellite location from the RCFC down the street from the mill to store additional fibre for the mill.

Another challenge the company has in regards to securing fibre is finding next-generation loggers to work in the harvesting operations for years to come.

“We’re finding it difficult to find new entrants into logging,” Woodman says. “There are lots of opportunities for good cable yarder operators.”

Species and products
The company processes several species in its operations, including spruce, Douglas fir, hemlock and western red cedar. Each species type is separated and used for a different combination of wood products.

The spruce is processed to produce 1” x 3” to 1” x 12” boards that are sold worldwide. The Douglas fir and hemlock are used to produce 45mm-thick Taruki wood products that are sold in the Japanese and Chinese markets. The western red cedar processed is used for the widest variety of products of all the species, including: 1”x4” to 1”x12” boards, 2”x4” to 2”x8” decking, 1.25”x4” to 1.25”x6” decking, 2”x4” to 2”x8” quarter-inch off products, a complete range of panelling products, bevel, T&G, channel siding, a complete range of rough and surfaced industrial clears, and finger joint and edge-glued products.

In total, the mill currently has an average annual production of 120 million bdft.

“It takes a lot more effort from the guys on the floor to be able to identify the different species,” says Mike Holland, sawmill quality control supervisor, who has been with the mill for more than 15 years.

Although the mill typically cuts one species at a time, Downie Timber is a flexible facility that can cut two species at a time when constrained by logs. The ability of the workers on the floor to identify the different species has been a significant factor in the mill’s log diet flexibility, Holland explains.

says the facility can cut two species at a time when constrained by logs.

The process
After one of the mill’s Tigercat, John Deere or Madill button-top loaders unloads the logs and turns them, a Cat 980 loads the logs onto the cut-off saw tree deck where they are processed and debarked. Logs over 44” go to a Rosser Head debarker, while logs under 44” go to an Nicholson A1 debarker – with logs 20” or smaller debarked by a Nicholson A5 debarker.

The larger logs processed by the head rig are then sent to a 12” gang saw, 6’ twin saws or a 6” edger. The wood sent to the gang saw then goes to a trim line or is sent to a re-saw line or for re-edging to extract value.

Upgrades to the larger log line were done a few years ago by Lewis Controls, which performed several upgrades including a 3D carriage scanning system featuring LMI Chromascan 2440 sensors and an upgraded computer system for improved data collection from the floor.

Another major project undertaken over the past few years was the installation of a hybrid Comact system in the sawmill. It’s not quite a GradExpert and its more advanced than the regular TrimExpert. This hybrid TrimExpert contains LMI’s Chromascan 3155 Heads, and a total of 12 high-definition cameras. The high-definition cameras provide a better image for defect detection.

After managing a few challenges during the commissioning stage, the system has become a useful tool for the mill for detecting flaws and other characteristics in the wide variety of species being processed.

“It’s a great tool to use. It’s definitely helped us quite a lot,” says Holland. “The latest challenge was to do all the cedar and spruce. Optimization-wise, the real challenge is species contamination.”

The mill has also made improvements to the trim line’s infeed system.

The boards are then sent to the stacker, which has also had several aspects upgraded over the past few years including the unscrambler and infeed. The upgrades were performed by MillTech Industries, based in Salmon Arm, B.C., and Kamloops, B.C.-based Iron Code Engineering.

After being sorted, the boards are sent for drying in one of the mill’s nine kilns currently in operation – eight side-loading Custom Dry Kilns and one Aerodyne track load kiln.

Approximately 70 per cent of the kiln drying takes place on site while the remaining drying is done at sister companies Canoe Forest Products in Canoe, B.C. and Gorman Bros.’ Oroville Reman and Reload facility in Oroville, Wash.

At the planer, the mill has also installed a Comact GradExpert scanning system to help accurately classify different characteristics on dry planed lumber.

“There are two check graders working with the GradExpert, one is to identify defects the GradExpert struggles with while the second grader looks over the decisions at the green chain,” Holland explains. “We have the ability to disable the GradExpert and manually grade fibre depending on the products we are on.”

Dust and residuals
Future upgrades planned for the Revelstoke mill include new chip bins, and bins for sawdust

Currently, the sawdust and shavings are transported by truck to Pinnacle Renewable Energy’s pellet plant in Lavington, B.C.

Other residuals, such as bark products, aren’t as readily shipped out and can require some shopping around.

To manage the dust at the mill, the company has had engineering firms come in several times to look at any problem areas to help find practical solutions.

Smythe has worked at the Revelstoke mill prior to it being purchased by Gorman Bros. in 1990, so he has seen, firsthand, the company’s willingness to invest in the latest technologies.

“They’ve put $120 million into the mill since that time to put the best upgrades in,” he says.

Smythe sees no reason Gorman Bros. would stop investing now, which bodes well for the hundreds of people who depend on the mill for their livelihood and the town that Downie Timber calls home.