Nov. 20, 2013 - Don't let your cat out - the Canadian Wildlife Service studies on Bird Mortality have been published and the wagging fingers are pointed squarely at cat owners. The paper titled: A Synthesis of Human-related Avian Mortality in Canada is particularly useful. 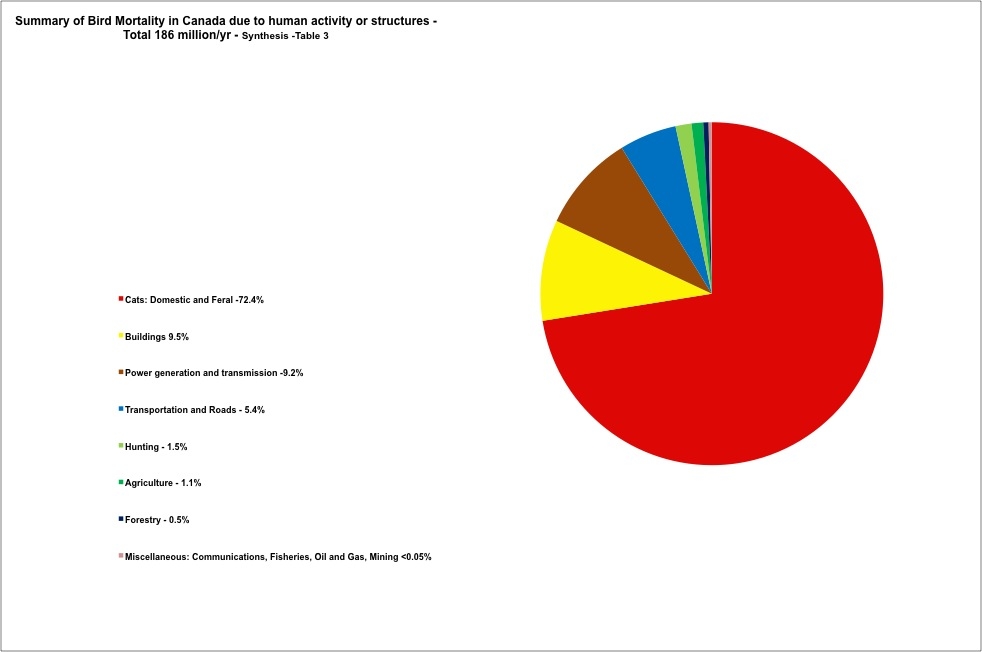 The studies covered mortality attributed to 28 types of structures and fields of human activity and estimated total mortality at 186 million birds (see Table 3 of the Synthesis report).

Cats, both domestic pets and feral cats play a “starring role” with about 70% of total mortality to their credit. Commercial Forestry operations are estimated to cause between 0.5% – 2% of bird mortality.

The report on bird mortality caused by Forestry operations, notes that the most serious source of uncertainty is the proportion of total area of forest that is harvested during the nesting and rearing period. The estimates used varied from 12% to 26%. There will be regional variations. A review of seasonal woodlands operations to narrow the spread would be a good idea.

Figures on mortality for most causes are dwarfed by the toll taken by cats, powerlines and buildings. From a public policy perspective governments should focus limited conservation dollars where they will have the greatest impact. The data suggest that cats, both feral and domestic, have the greatest impact followed by buildings, power generation & transmission and roads.

Forestry has a relatively small impact on bird mortality relative to other causes. However, there is an impact. Managers of forestry operations should continue to implement best practices for habitat management, retention of coarse woody debris, snags and maintenance of habitat in time and space. Forestry organizations, including certification systems, should continue to work with their conservation partners to conserve habitat to support populations of forest bird.

It is unlikely that many feral cats survive the harsh realities of life in the Canadian bush. There are few tracks or signs of feral cats in the forest. Predators (e.g., fox, coyote, marten, fisher, and birds of prey) as well as winter cold probably make life very difficult in the forest. In rural areas with barns and sheds for shelter and garbage cans to forage in, the survival rate is probably higher. Cats do very well indeed in cities. Birds – not so well.

Canada can have a significant positive effect on bird mortality by greater control of its feral and domestic cat populations. This is in keeping with the experience of other countries.

Those with influence in public policy might start an advertising campaign and outreach to local veterinarians – whom most cat owners will visit at least once a year. Cities and towns would do well to start enforcing cat bylaws. Environment Canada could show leadership, perhaps in partnership with bird conservation groups, to mount a public education program to encourage owners of domestic cats to keep them in the house and support feral or “non-owned” cat population control programs.

Tony Rotherham is the Executive Director of Canadian Association of Forest Owners.