Do one thing, really well. Given the slim margins in today’s hyper-competitive lumber sector, there’s much to be said for that strategy. That approach has allowed Vaagen Bros. Lumber’s multi-generational family business to thrive and survive the past few decades despite challenges that have seen many of their U.S. northwest counterparts shut their doors.

It’s only natural that the company would apply the same strategy to their first foray into the Canadian lumber sector. As vice-president Russ Vaagen explains, the acquisition of the former Pope & Talbot dimension mill in Midway, a small town just above the Washington border, was a good fit with both their markets and growth strategy.

“We’d been looking at southern B.C. for a while now, and thinking that it would make really good sense to have a small-log mill there. When we first had a look after Pope & Talbot went bankrupt, it didn’t work out. But the second time, when the Town of Midway approached us to run the mill, it was like all the stars aligned. We had found a single-pass machine that we were looking at for another of our mills, and this operation fit really well into serving one of our markets in a way that would avoid any duty issues.”

And much like their operations in Colville and Usk, Wash., the small-log specialists saw a niche that no one else was serving, one they feel can make the local industry more efficient.

“When we first looked at southern B.C., the mills worked in a certain area and took all the fibre and tried to do the best they could with the mix. So the Midway mill we bought had a headrig and Chip-n-Saw lines that tried to handle everything from small tops to massive logs. In the markets we were used to, it had evolved to the point where everyone was specialized in certain markets and took a certain log profile. Over time it has made everyone more efficient. Our role has always been to take the small logs and low-grade products no one else wanted, and we’ve built our mills to handle that mix very efficiently. We saw ourselves adopting a similar role here.”

Single-Pass Solution
To that end, Vaagen Fibre Canada ULC has essentially gutted the entire front end of the mill to create a simple, single-pass flow designed for small logs. Just prior to their second, successful attempt to buy the Midway mill, they had acquired a HewSaw 200MSA-SE (separate edging unit) line from the old Domtar (Eacom Timber) assets in Ontario. The unit had never been used, but it was still sent to HewSaw North America’s shop in Abbotsford, B.C., to be stripped down to the frame and rebuilt to Vaagen specifications. The company runs two other HewSaw lines in its U.S. mills, and has almost 20 years’ experience with the machine and concept.

One step was to add more horsepower, with the original 125-hp motors replaced by 250-hp units for faster throughput. The company also bought a new dual log rotator from HewSaw, and worked with Prologic+ on tying the scanning, log sort and optimization package together.

“Basically we took the whole centre of the old mill out, and replaced it with the HewSaw line. There is lots of room, so it looks like a typical Scandinavian single-pass line – long and straight.”

The current mill flow starts at a revamped log merchandising deck that would look more at home in a northern Quebec small-log mill than in B.C. Working with Hollins Industries, the mill replaced the old merch line with a transverse slasher deck using butt plates and pop-up saws to make the preferred 18- and 20-ft lengths. The line applies simple optimization for length, but not diameter, using what Russ calls “modern photo-eyes,” new versions of the old standards with a longer range. The optimization software was put together by sawmill automation company Iron Code Engineering out of Salmon Arm, B.C.

Slashed to length and oriented small-end first, logs go through two of the Nicholson A5 17-in debarkers that were salvaged from the original mill. A third 18-in Cambio debarker stands in reserve on a separate deck.

“The old mill had four debarkers, including a 30-in Cambio for the headrig. The 18-in Cambio was on a separate deck with its own infeed, so we’ve tied it into the sawline, and added a Morbark mobile chipper that we’ve converted to a stationary electric unit. In the future if we need to take some low-end pulp wood as part of a timber sale, and markets allow it, we have an outlet.”

That ability to deal with marginal timber has been a key component of the company’s operations south of the border for years. For now the Cambio serves as a backup should a main debarker go down, and the chipper allows the mill to get rid of any problematic logs that make their way into the mill.

On that subject, the mill has also bought a Valon Kone flare reducer to eliminate log jams at the HewSaw line.

The reducer will be installed in the new year.

Sorting Out Issues
When Canadian Wood Products talked with Russ in early November, the mill was running on two sort decks that had been converted to handle up to 20-ft lengths. Fir is sorted in the mill yard, so that inside the mill one sort contains the smallest sort (two board patterns) that they run at the smallest gap and highest speeds possible, the other a mixed bag that is run slower on scan-n-set mode. However, Vaagen had already bought three new bins from Hollins Industries, and Russ expected these to be installed in the coming weeks.

“That will make a big difference, obviously. We’ll optimize for pattern and be able to run much of the production in batch mode as we do in our other mills. That’s the next big step we need to take to get production where we want it to be.”

Logs are loaded into a long V-flight conveyor feeding the dual log rotator and then the HewSaw R200MSA-SE itself. Prologic+ scanning just ahead of the line can determine both optimized rotation and cutting solution.

To house the HewSaw unit, the company commissioned a local sawmiller to cut saw timbers for the roof, finished by Douglas fir and larch tongue-and-groove boards from Vaagen’s mill in Colville, Wash. The expansive operator booth is also finished in wood, adding to the handsome Scandinavian effect.

“We’ve got some work to do this winter to close the mill in after the bin construction is done, but overall it looks really nice.”

Following the HewSaw, lumber goes to one of the original sawmill green ends. This includes a Coe/Newnes (USNR) trimmer optimizer with D-Tec scanning, 65-bin sorter and stacker line. Lumber is dried in one of two 225,000-bdft Salton/Wellons hot oil kilns fired by natural gas, and is sent to the company’s Colville planer mill for dressing and packaging.

Midway’s production is currently destined for Australia, explaining the intense focus on 18- and 20-ft products and the metric sizing. That allows the lumber to enter the U.S. duty-free, and given current production at Midway maximizes production off the Colville planer mill.

Production is currently at the 200,000-bdft/shift level, although Russ says with the new bins the target is to hit 300,000 bdft/shift on a sustained basis via a single staggered shift.

“We currently have over 60,000 bdft, or over two hours, of deep piling capacity ahead of the trimmer line, which allows us to run the HewSaw quite a while prior to starting that line. We also have good surge capacity at the log infeed, so we’re running a staggered shift to maximize production on the HewSaw in a single shift.”

Job One is to get that single shift production to the 300,000-bdft target, which puts the mill on pace for 100 million bdft per year.

“We’re looking at 7 million bdft/month or more from a single shift. Depending on logs and markets, and ramping up to where we want to be on one shift, we can see adding a second shift and running at 10 million bdft/month. At that point we’d likely look at doing some of the planing here, but we’ve got a way to go before that,” admits Russ, adding that they still expect the timing of the project to pay off. “We’ve set the mill up for the markets we’re in now, and we expect that the added capacity will pay off when the markets really turn.”

Settling in
The mill started up in late 2011, and as of late fall 2012, Vaagen Fibre Canada had invested some $13 million in the rebuild, including both the capital and operating costs of the startup. Not surprisingly, the company has faced some growing pains in its first Canadian operation. Managing currency fluctuations has been a learning curve, as has dealing with B.C.’s relatively high labour rates.

“When we used to look at costs in B.C., everything was lower,” Russ says of the irony of rising costs now that they have moved from being a U.S. competitor to being a Canadian operator. “It swings with currency, and it’s just something you have to manage.” Like many start-ups in remote regions, they have wrestled with finding the right mix of managers. Building logging contractor capacity has also been a challenge, albeit hardly a new one for either the Vaagens or the industry in general.

For the time being, however, Russ says they are on track in carving out their own niche in southern B.C. They have no AAC, but work instead with the Osoyoos Indian Band on some of their non-renewable licences, bid on B.C. timber sales, and manage fibre exchanges with most of the region’s mills.

“I would say we have very good relations with most of the operators in the region. We want a very specific log diet, pretty much in the 6.5-in top range, and they don’t really want to deal with that. We keep those, they only take the logs they really want for their own markets, and vice versa. It has worked well in Washington, and we see that move to specialized production benefitting everyone down here too.” 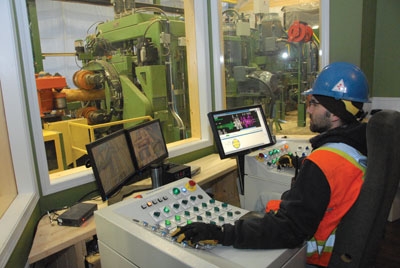 The expansive cab gives operators a bird’s eye view of the line as well as the infeed and outfeed conveyors. By retooling its Midway mill to a one-line
Print this page