July 13, 2017 - The first of 310 firefighting personnel from other Canadian agencies began arriving in British Columbia on July 9, 2017, to help the BC Wildfire Service get the upper hand on the 225 wildfires that are burning in the province. 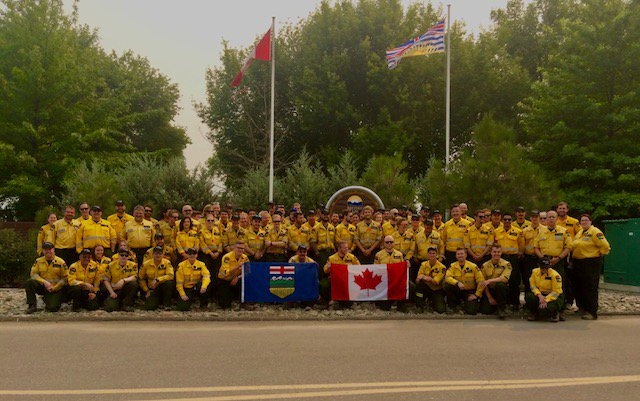 Under normal circumstances, the BC Wildfire Service has sufficient staff, aircraft and equipment available to tackle almost any situation that may arise during the fire season. More than 1,600 B.C. firefighters and support staff are in place for the 2017 fire season, and the government can also call on about 2,500 private contractors to pitch in when necessary.

However, the extraordinarily high number of wildfires that were sparked from July 7-8 (over 223 new fires over just two days), their extremely volatile behaviour and their rapid spread prompted the BC Wildfire Service to bring in some much-needed help this week.

Once the hundreds of newly arrived fire crews, support staff, incident management teams and fire investigators have been briefed, they’ll be deployed wherever they’re needed in the province. The 310 firefighters arriving this week will be coming from:

The BC Wildfire Service is also bringing in additional air support for its fleet of 32 contracted aircraft and nearly 200 additional contracted helicopters that have already joined the fight. Ten firefighting aircraft have been brought in from other Canadian provinces, including seven airtankers and three “birddog” aircraft (which help co-ordinate airtanker operations from the air).

Requests for out-of-province assistance are made through the Canadian Interagency Forest Fire Centre, which co-ordinates the sharing of firefighting resources within Canada. Under mutual aid-resource sharing agreements, the jurisdiction requesting the resources pays the costs.

The Canadian military is also prepared to help and has Joint Task Force Pacific liaisons embedded at the Provincial Emergency Coordination Centre in Victoria. Emergency Management BC worked with Public Safety Canada to pre-position transport aircraft and crews through a formal Request for Assistance. If the need arises, these aircraft would assist with emergency response operations such as evacuations.

To report a wildfire or open burning violation, call 1 800 663-5555 toll-free or *5555 on a cellphone. For the latest information on current wildfire activity, burning restrictions, road closures and air quality advisories, go to: www.bcwildfire.ca