Industry News News
For the love of larch

Apr. 25, 2014 - Larch is an extraordinary tree, not only for its natural beauty, but also for its unique features and as yet unknown potential for exterior and interior appearance-grade wood products. Sometimes falsely named red spruce and featuring a beautiful reddish cone, it is the only conifer that loses its needles annually, like a hardwood. In Europe, most notably in Denmark and Finland, the European Larch has been used in the production of wood floors for more than 35 years. In Poland and Russia, larch is used to make wooden windows due to both its resistance to rot and its decorative appearance.

Obviously, turning larch into high value products is carried out by companies using advanced and innovative processes at each stage of production (vacuum drying by heating plates, for example) to ensure the success of the finished product and minimize production losses; this is because this species is one of the most difficult to dry. In this sense, oil finishes are preferable to varnish or stain, especially with regard to the dimensional stability of the product.

In North America, larch was frequently used for railroad ties, wooden culverts, piles, fences, boat building, wood patios (decks), dock aprons (due to this wood’s resistance to mechanical manipulation and moisture), platform trucks and boxcars. Moreover, for more than 150 years barn floors were traditionally made of larch due to its resistance to wood moisture and the horses’ hooves and urine!

A designer recently told me he did not recommend the use of larch in heritage homes with no heated basements, or in cottages, or for bathroom floors. My surprise was matched only by his ignorance; I suggested to this gentleman to consult his horse before making comments on larch! I believe so strongly in the strength and beauty of the larch that I renovated my own summer cottage, with its non-insulated sub floor, completely in larch; the same with the floors, walls and bath (oil finishing), all of which have undergone 10 years of extreme variations of temperature and humidity without any deterioration! I have therefore witnessed practical proof of my assertions. As in Europe, larch could also be used for panelling and other composites or laminated exteriors.

In Canada, it is as if the knowledge of our exotic species was lost with this period of abundance. Therefore, in this article, I wish to once again highlight larch’s potential and explain some tips and technical tricks to successfully manufacture high-value products using this species.

Source of supply
The volume of larch available is probably more abundant than is believed because this species is not always identified in inventories. It is found in private forests, around bogs to the south, scattered everywhere in bands in sparse areas, along the edge of the highway network to Prince Edward Island where the Irving Company has a major supply concentration. A concentration is also found in Maine and on plantations in some northern U.S. states. A good volume was scattered in Abitibi and the boreal zone, often amounting to as much as five per cent in some areas. To the south, there are sometimes hybrid larch plantations which especially should not be mixed with natural larch forest during drying because its longitudinal withdrawal features are too different (juvenile wood) and this last variety displays a different decorative pinkish colour, that of heartwood.

Characteristics and peculiarities of the larch
The larch simultaneously has the defects of white pine and oak during processing, but fortunately also displays the beauty of ash because of the extraordinary greenish or pinkish color of the heartwood and the sudden change in density between the spring and summer wood as evident from each growth ring. This poses a challenge of size for the processer. Therefore, opportunists should refrain, since only those who master advanced wood science techniques will achieve finished products with only economically reasonable losses on high-value products. Larch is intended for use in $1,500 and higher per thousand foot board measure products for outdoor products (finished shaped patio components, paneling, etc.) and upwards of $3,000/per thousand foot board measure for interior finished shaped products. A few rare innovative companies already do this.

Lathing using the Smart Battery Box System
This is based on a European technique I’ve tested and improved with some innovative manufacturers. Stacking is done using the Box Pile standard as described in all drying manuals, but by adding the following alternating changes: alternate each row with the heart down, and have the heart of the next row facing upwards in order to cancel out the differential shrinkage forces encountered during drying. The top row should have the heart down and the bottom row the heart facing upwards. No pieces should have the heartwood on the edge of the exterior side of the packages; otherwise the piece will be a total loss after drying. This can be done at the speed of production because it is simple and based on a quick decision, placing the critical parts in the favourable directions (I will elaborate on this in a future article). Stickers should measure ¾ in. x 2.5 to 3.5 inches in width (no small boards) with a maximum variation in thickness of 1/32 inch. Double stickers at the end of the packets and stickering every two feet, perfectly aligned.

Larch drying technique
It is best to achieve a partial pitch setting using a temperature phase of 90-95°C for 12 hours for the 4X4, and for 24 hours for the 8X4, in wet conditions, before reaching the FSP (30 per cent MC). This allows for greater plasticity of juvenile wood (fewer twists due to the longitudinal shrinkage) and the stabilization of the larch’s natural colour by evaporating the heartwood’s extractives. Otherwise, the larch heartwood will develop a dark blue tint six months after installation at the customer’s premises, which may not always be appreciated. It is both pointless and too risky to attempt to set the pitch of large occasional resin pockets that can be removed at the end trimming stage.

For the visionaries of advanced technologies, dryers such as the Vacupress type would be the technology to implement for drying the larch to eight per cent MC or less for interior products, because that sets the pitch more easily (boiling point at 60°C) and less related to vacuum level, the plasticity of juvenile wood is assured and the natural colour of the larch is guaranteed. This technique has been used for decades on the European larch in Finland and Denmark.

Finally, I want to reiterate that the larch market has been destroyed several times by opportunistic processors who have introduced and even destroyed the market by distributing faulty products combined with poor marketing strategies targeting distributors and installers unfamiliar with this rather extraordinary type of wood. This is my motivation to provide common-sense information in this article, hoping that only the best processors with long-term goals will continue to give larch the reputation that it deserves for high-end products. Thus, the distributors and installers of your products require continued training and monitoring because customer satisfaction is the most powerful engine for growing your sales.

X-ray of larch
Average density: 0.48 reacts quickly to the ambient air when unfinished

Differential shrinkage risks: dangerous for pulling on heartwood on all components of six inches or more in width; thus encourage radial sawing for large boards and/or live sawing for the centered heart.

Resistance to rot: second best species after the Eastern Cedar

Pierre Asselin, F. Eng. has been a trainer and consultant in wood drying and product development for 30 years in eastern Canada. He is currently with SEREX. 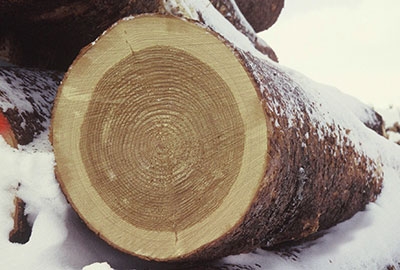 Log illustrating the decorative colour of the heartwood (southern larch). Larch is an extraordinary tree
Print this page