When Timberline Logging, of Wallagrass, ME, learned that rates were being cut by its customer, Irving Woodlands, the two-man company didn't panic. In fact, it did quite the opposite. The Toussaint brothers, Jacques, age 38, and Chris, 35 owners of Timberline, went on a strategic offensive by upgrading to Valmet’s big 941 harvester with the new 370.2 head. 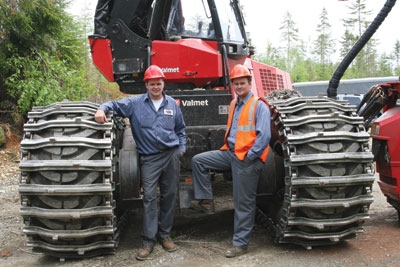 Chris and Jacques Toussaint with their new harvester. When Timberline Logging

Timberline Logging is currently in its 15th year of operation. For the last nine years, the brothers operated a Valmet 911C harvester fitted with a telescopic boom and a Valmet 965 harvesting head. They were initially drawn to its fuel efficiency, operator visibility, cab-levelling and Valmet’s side-mounted boom, which allows the operator to rotate to always face the work.

The brothers felt Valmet had many design advantages that would add up to more production over time. After putting 36,000 hours on the harvester – still with the original engine and many original components – the brothers were pleased with the machine’s production and reliability. The harvester added to Timberline’s efficiency and professional approach. Plus, it was a key component to becoming Irving Woodland’s highest producing harvester contractor in the state.

Just how the Toussaints worked their way to the top is simple – they’re all business. They run two 10-hour shifts, Sunday through Friday. Over the years they have streamlined each process to become almost totally self-sufficient in terms of maintenance and machine repair.

Shift changeovers allow the Toussaints to inspect the machine, top off fuel and lubricants, handle routine maintenance, and switch out hoses and other wear parts when necessary. Their old 911C had been running great for its age, but detailed production records showed a trend to more downtime and repair work.

Much like their record keeping, the company’s service trailer is neat and orderly, with no detail left to chance. It’s a fully stocked portable workshop and parts department, including a welder, generator compressor, hose press, and full complement of tools. It also includes part bins arranged by section and number to match the Valmet parts catalog.  Common wear parts and consumables are always at the ready, and items used are logged daily and re-ordered each week.

Both Chris and Jacques knew their old 911 like the back of their hand, and would keep each other abreast of its daily performance. Their constant diligence allowed them to get the most out of their machine and maximize its trade-in value.

“We went for a two-and-a-half year stretch without losing time from a breakdown due to a part we didn’t have, or a repair we couldn’t fix on our own,” Jacques says. “What finally ended that run was, after 28,000 hours, our boom broke. That just might have been a record!”

“Working with Irving Woodlands is fair, but tough,” Chris explains. “It is a well run company, but it’s all about production. Efficiency is rewarded and we can earn bonuses for doing a good job. We’re paid the same rate for the same work as the other harvester contractors, but it’s unlimited production. It’s reassuring to know we’re always going to have work, and that allows us to concentrate on what we do best.”

Chris adds that “if you want to make more, you need to cut more. Irving has a minimum efficiency goal for its contractors of 80% operating time. We share our harvesting data with them; we take advantage of their GPS mapping, so it’s a good give and take.  The data showed that our machine was down to a point where the best we could do was about 85 out of 100 a possible operating hours.  That’s good, but not good enough, so we put our plan into action.”

In reality, the whole process didn’t happen overnight. They had been researching machine brochures, videos, and websites from each manufacturer for several years. They even went so far as to order machine manuals to study detailed diagrams and subtle differences between brands. 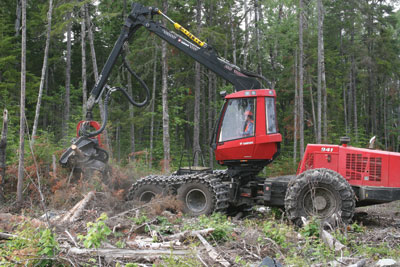 As they narrowed the search, they attended demos and talked with loggers, which eventually led them to Quebec contractor, Normand Morency, owner of North America’s first Valmet 941. After reassurance of the increased productivity and a positive reference, the Toussaints became convinced the Valmet 941 was the machine for them.  When availability on the older machine started to drop to the low 80% range, it was time to act.

Timberline made the deal last June, and with 4,300 hours on the dial in early April ’08, the honeymoon with its 941 continues. Production results continue to show close to a 50% increase, something Jacques says comes down to three things.

“The biggest factor is the increased productivity of the 941 – that’s the most amazing part. Then there is less downtime, amounting to say 50 cords/week in extra wood. Finally, we’re less tired with the new machine, so we can work a slightly longer shift. To me the most telling thing is forwarding. In most cases around here, one harvester has a hard time keeping one forwarder going. We now need two forwarders most of the time – an 860.1 working double shifts, and an 840.1 on singles – to keep pace.” 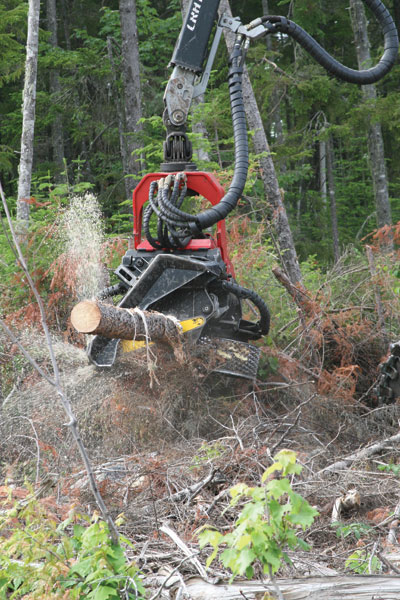 Forwarding distances range from 500 to 2,000 ft, with a rough average being 1,200 ft, and forwarding is done by a fellow contractor Tim Guimond.
Having great familiarity with Valmet, the brothers appreciate the increased size and power of the machine. The 10 m (33 ft) parallel boom matches the harvester’s power, and the Valmet 370.2 head handles the cutting with a maximum 60 cm (24″) diameter cut capability. Now, there is no need to slow down when cutting large diameters or tough hardwoods – it handles every tree without much need for a second thought. Timberline cuts a range of wood for Irving that includes spruce, white pine, fir, maple, birch, and more, with stump diameters ranging from 4 to 30 inches, with the head not fully on the tree when cutting the larger ones. A typical job will include up to eight sorts.

Fuel economy is nearly identical to the smaller Valmet harvester. The 270 hp machine runs on as little as 20 to 23 litres/hr (5.5 to 6 gal/hr), yet delivers 100 hp more and boasts a bigger, more powerful head. Jacques also notes that the fuel tank is large enough to run two shifts without stopping to refill, for more production time.

Extra Value
The Toussaints list many improvements their new harvester offers, all saving time. Maintenance is faster, not just because it’s a new machine, but because of the engineering details that speed up every task. Jacques is quick to compliment the engineers.

“They’ve thought of everything. They made just about every small improvement possible to save a few seconds on every step. It makes it just that much more productive. It’s almost unbelievable that this machine can cut that much more wood, but it does.”

Timberline was able to add its own timesaving feature to the harvesting head. They increased the capacity of the bar oil reservoir from the standard one gallon capacity up to three. The head arrived with colour-marking spray capability, commonly used in some European markets. Since North American mills don’t use paint marking, Timberline took advantage of the unused space. The new “logger engineered” tank needs filling only once a day, rather than every shift, saving a few more minutes each day.

About the new harvester characteristics, the brothers agree that the ergonomics, comfort and visibility make it a pleasure to operate. The cab is larger and mounted differently than the 911 (at mid-cab), so the ride is far better and both report they aren’t tired at the end of their shifts.

Production is up to a high level once again.  Timberline is currently producing at 90 out of a possible 100 hours each week. They report that even with the record snowfall this year, they’re cutting better than ever. “The extra 20,000 lb makes a huge difference, it just goes. It’s like having a track machine,” Jacques explains.

With regard to service and repairs, there is nothing yet to report. If history is any indicator, the brothers are expecting more of the same reliability and dealer service. Jacques says, “The Oliver Stores will be here when we need help, day or night, but really, we know how to take care of the machine. It pretty much troubleshoots itself.”

No Silver Bullet
Still, new technology and higher production only take you so far in these days of tighter margins and a near-desperate forest industry. Costs climb, rates remain stagnant or fall, and contractors are left holding the bag. US loggers like Timberline also have to manage the falling dollar, and its impact on imported parts and machinery, as Jacques explains.

“The average price for our parts has increased 40% in the last year. A main reason our availability is so high is the amount of parts we stock. Irving uses our productivity as part of the group average, but doesn’t allow any costs in their machine pro forma for parts inventory, service trailer, tools, etc… We have to cover those costs by producing more than the average contractor.”

Chris adds that if the bottom line is what really matters, adding the 941 may have boosted production, but is no silver bullet for all the challenges contractors now face.

“The bottom line is that even with all the increased productivity, our profitability was lower in 2007 than in 2006, when we were running a very old, lower productivity, but paid-for machine.”

Jacques sums it up by suggesting that maybe the industry is reaching a turning point, where more productive machinery may not be the answer to all the questions facing today’s contractors.

“Add the value of the risk of a new machine with a big payment that has to produce into the equation, and it becomes an interesting discussion about whether it’s worth buying a new machine in the hopes that it will run efficiently beyond the last payment, because that’s what it has to do to make money these days. With our old machine, we could set it out in the yard, plant flowers around it, and find another job,” he adds only half tongue-in-cheek. “We may be reaching a tipping point in the industry where the increased productivity of new equipment is incapable of offsetting increased costs.”

And coming from a well-organized logging crew experiencing productivity gains as Timberline has with the new 941, that is a concern worth listening to.

Russ Potratz is a marketing communications specialist working on behalf of Komatsu Forest. Based in Wisconsin, he has over 13 years’ experience covering the forest industry.