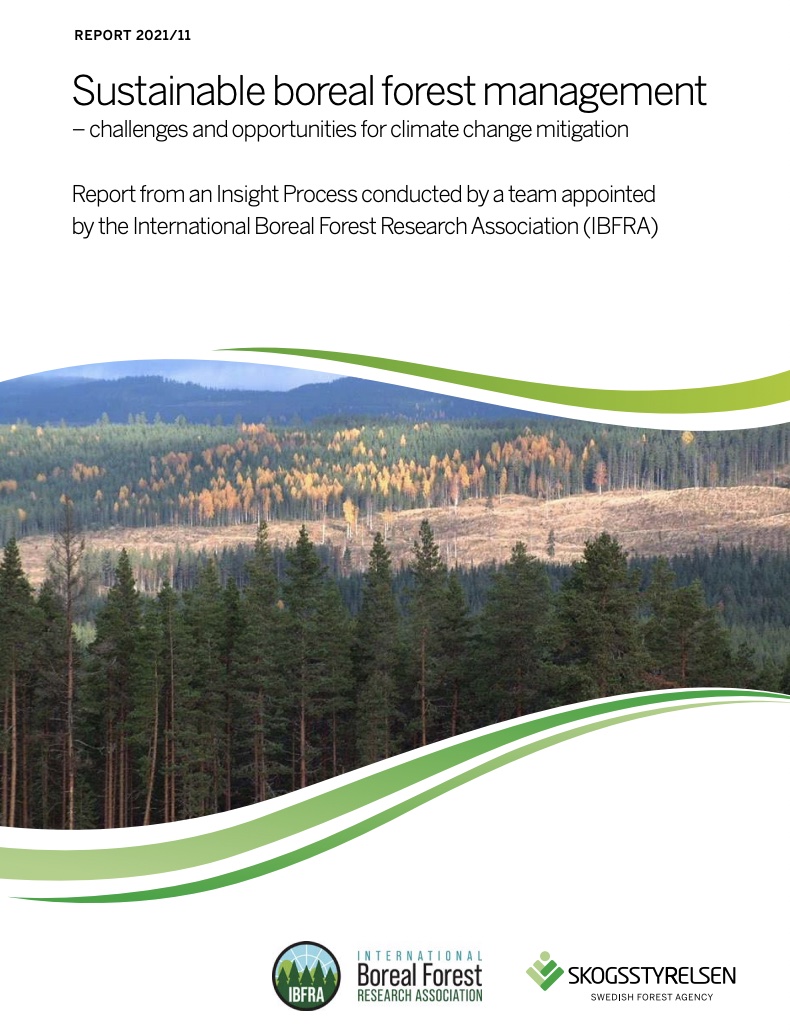 The carbon stock in managed boreal forest landscapes is increasing, while it is relatively unchanged in less intensively utilized forests where carbon losses due to forest fires have instead been significant during 1990-2017, according to a new report by the International Boreal Forest Research Association (IBFRA).

Boreal forests  ̶  also called the Taiga  ̶  are defined as forests growing in high-latitude environments where freezing temperatures occur for six to eight months of the year. They account for as much as 30 per cent of the world’s forests and cover about 10 per cent of the global land area. As interest in these forests continue to grow around the world, this report by the International Boreal Forest Research Association (IBFRA) is of great significance.

“This first IBFRA insight process on Sustainable boreal forest management: challenges and opportunities for climate change mitigation addresses the impacts of climate change on forests, the role of forests in mitigating climate change, and the ways in which the forest sector can contribute to removing emissions from the atmosphere,” notes Florian Kraxner, Agriculture, Forestry, and Ecosystem Services Research Group leader at the International Institute for Applied Systems Analysis (IIASA) in Austria and IBFRA president.

Large-scale studies of how the atmospheric content of carbon dioxide (CO2) varies in time and space indicate that the northern forests are a CO2 sink, in other words, they absorb more CO2 than they emit into the atmosphere. The report, for the first time ever, presents a comparison of the development of forests’ carbon stock over time in different parts of the boreal forest belt, which extends through Canada, the American Alaska, Russia, Sweden, Finland, and Norway. The analysis, undertaken by 25 researchers from these six countries, as well as from IIASA, is based on the data that the countries involved have reported to the United Nations Framework Convention on Climate Change (UNFCCC).

The study compared countries with relatively intensive forestry (Finland, Norway, and Sweden) with countries where forests are used less intensively (Canada and Russia), or not at all (boreal Alaska). The measure used to determine the intensity of forestry was based on the percentage of the forests’ total carbon stock harvested each year. In Sweden and Finland, this amounted to 1.5 per cent, compared with 0.9 per cent in Norway, 0.3 per cent in Canada’s managed forests, and 0.1 per cent in Russian forests. In countries with an established forestry sector, harvesting mainly takes place on a rotational basis with clear felling of planted forest.

The analysis indicated that the carbon stock increased in the countries with intensive forestry. At the same time, as harvests increased during the period 1990–2017, the carbon stock also increased by 35 per cent, seen as an average over the entire forest landscape in the Nordic countries. In the countries with less intensive forestry, the changes were significantly smaller (a few percentage points more or less). In other words, the report does not support claims that unused forests provide a greater climate benefit.

“The countries’ reports to the UNFCCC included estimates of changes in carbon stock in the soil. Our findings show that the carbon stock on mineral soils in the intensively managed boreal forests of Nordic countries is increasing twice as fast compared to the countries with less intensive forestry,” explains senior IIASA researcher Dmitry Shchepashchenko, one of the study authors. “On the other hand, we found that significant carbon losses and nitrous oxide (N2O) emissions occur from drained peatlands, but despite this, the Swedish forest soils are on average still a carbon sink. In Finland, where the proportion of peatlands is higher and where over 50 per cent of the peatlands are drained, the emissions from peatland soils are of the same magnitude as the carbon sink of upland forest soils,” he adds.

“One of the driving factors for the large differences in CO2 uptake between managed and unused forests is the high growth rate in the managed forests, which are on average younger. Another is the large losses of carbon due to forest fires that occur much more frequently in less intensively managed or unmanaged forests,” says IIASA emeritus research scholar Anatoly Shvidenko. “In Alaska, Canada, and Russia, an average of 0.5-0.6 per cent of forest area burns each year, compared with 0.01 per cent in Sweden, and even less in Norway and Finland. This amounts to at least 50 times more burning in less intensively managed forests.”

The authors further point out that today’s low fire frequency in Nordic countries is due to effective firefighting measures, motivated by the economic value of the trees. During the period 1500–1850, when timber was not valued in the same way, roughly one per cent of the area burned each year. Among other things, fires were started to improve the grazing of cows, sheep, goats, and reindeer in the forests.

The analysis described in the report covers the period 1990 to 2017. Comparable data that go back further was unfortunately not available for some of the countries analyzed. The researchers say that one of the challenges they faced has been to compare data that had been collected in different ways and of different quality.

The report is the result of an assignment given to IBFRA during a ministerial meeting in Haparanda, Sweden, in 2018, which included six countries: Canada, Finland, Norway, Russia, Sweden, and the United States.