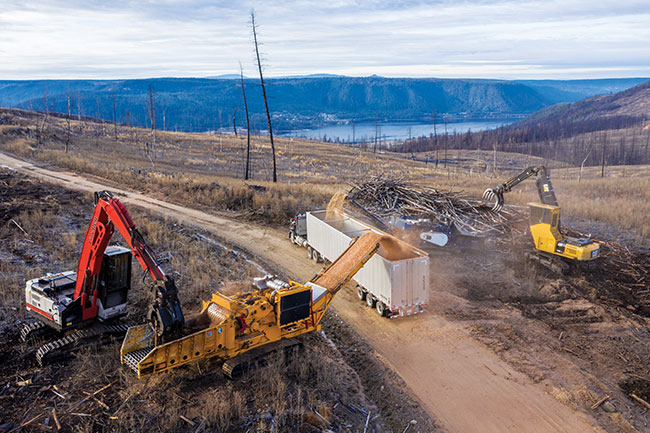 For central B.C. logger Tsi Del Del Enterprises Ltd., harvesting is just one component of how they manage forest licenses belonging to the Tsideldel First Nation and other First Nations west of Williams Lake, B.C.

“The company belongs to the community of Tsideldel,” says Phil Theriault, general manager of Tsi Del Del Enterprises. “We’re not a contractor logger, we own the wood and we’re doing all the forestry management. It’s a full loop from harvest planning to reforestation. We’re a full forest management company.”

Based in Williams Lake, B.C., Tsi Del Del Enterprises started up in the early ’90s as a way to keep resources within the First Nations’ traditional lands and to improve the community’s economic and social conditions. The band originally partnered with Jacobson Brothers Forest Products Ltd., which was purchased by Riverside Forest Products and later by Tolko.

“After quite a few meetings we managed to form a joint venture company,” says Percy Guichon, business development manager for Tsi Del Del Enterprises. “We started with a buncher, a skidder, a loader and two or three trucks – less than 10 employees, including the foreman and the book keeper.”

Today the company employs nearly 100 staff members and subcontractors, running around 40 machines in the bush. Depending on the year, they harvest between 340,000 and 400,000 cubic metres annually – about 40 to 45 loads a day.

The geography of the Tsilhqot’in region of B.C. presents challenges for loggers like Tsi Del Del Enterprises, mainly due to small piece sizes and low volume stands. Typical volume is less than 100 cubic metres per hectare. Around 90 per cent of the trees are lodgepole pine, common in the B.C. Interior, which range from 0.07 to 0.16 cubic metres per log.

“I would say at least 60 to 70 per cent of the volume is from beetle kill from 20 years ago,” Theriault says. “We’re still harvesting it. Because it’s so dry, the root system doesn’t rot quickly so the trees are still standing and they’re still good, but it’s tailing off.”

It will be some time yet before second-growth harvesting can take place in the Tsilhqot’in. Pine logging began there in the ’80s, Guichon says, so there’s a while to go before the second growth pine matures.

The company owns several logging trucks and subcontracts the rest. Transportation costs are significant with the average haul between 10 and 12 hours. 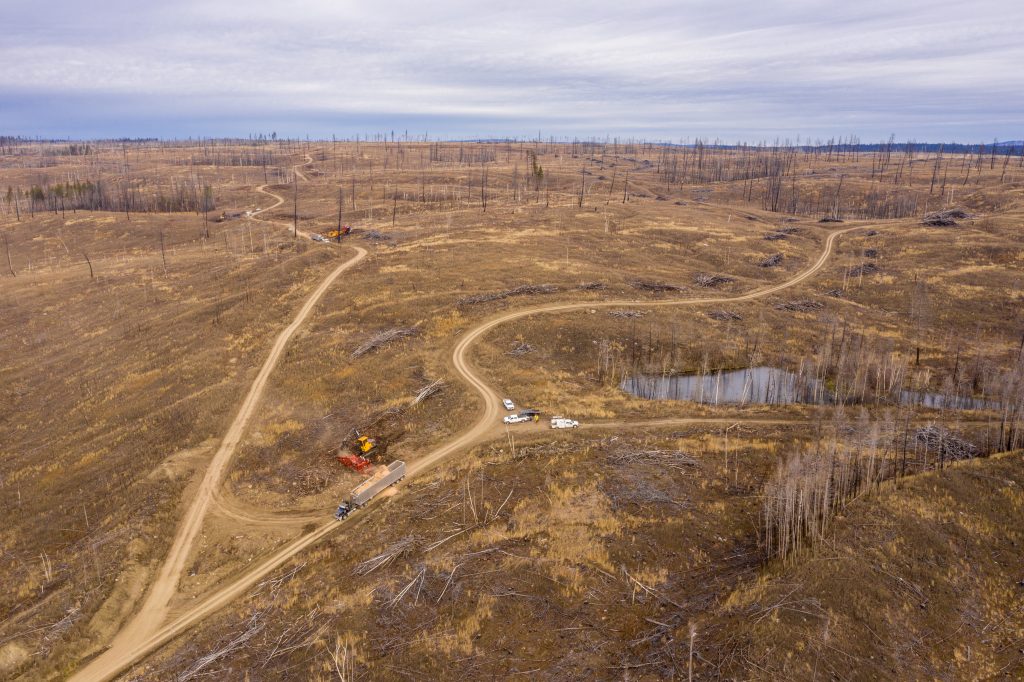 The geography of the Tsilhqot’in region of B.C. presents challenges for loggers like Tsi Del Del Enterprises, mainly due to small piece sizes and low volume stands. Photo by Mitch Cheek, Solos Productions.

The company’s most recent iron purchase was a John Deere L-II series skidder, the latest series from the U.S. forestry machine manufacturer. The second iteration of John Deere’s L series skidders, the L-II was a complete component redesign that John Deere brought to market last fall.

“They always had a very good skidder. There was one series in the middle – I think it was the H series – where the engine was no good. But right now with their L-II series, it’s a really good machine so we went back to them,” Theriault says.

Theriault calls Tsi Del Del Enterprises’ fleet eclectic based on how many brands their working with. The list includes: Tigercat 870 feller bunchers (the largest in their line of bunchers); John Deere skidders; and Caterpillar 320 swing machines and Link-Belt processors, both with Southstar processing heads.

“When Southstar came out with a processor system that could multi-stem – cut two or three trees at a time – we started buying those machines. We’re very pleased with them. They did a good job with those heads – they’re very sturdy. Our oldest one has nearly 20,000 hours on it and it’s still working on a daily basis,” Theriault says.

For log loaders, they are working with a combination of John Deere and Caterpillar. Their dozers are Caterpillar and the excavators are Volvos.

Not surprisingly, an outside geomatics provider was needed to tie the entire smorgasbord of machines together. They went with FPInnovations’ FPTrak.

In the bush, there is no cell service so the Tsi Del Del Enterprises is working on a project in partnership with Tolko to test out portable cellular towers. A network connection would allow operators and machines to instantly communicate, sharing location and other data as needed to optimize harvesting patterns.

As of last spring, the log trucks are also tied to the company’s geomatics system. Tsi Del Del Enterprises implemented a Geotab fleet tracking system in order to meet upcoming Canadian regulations for electronic logbooks. The system tracks location, speed, and cycle times, among other things, and includes driving cameras.

Time for the grind

“We’re producing biomass and pulpwood instead of burning the slash piles,” Guichon says. “It creates some jobs there, reduces the carbon emissions and allows us into those low-volume stands.” 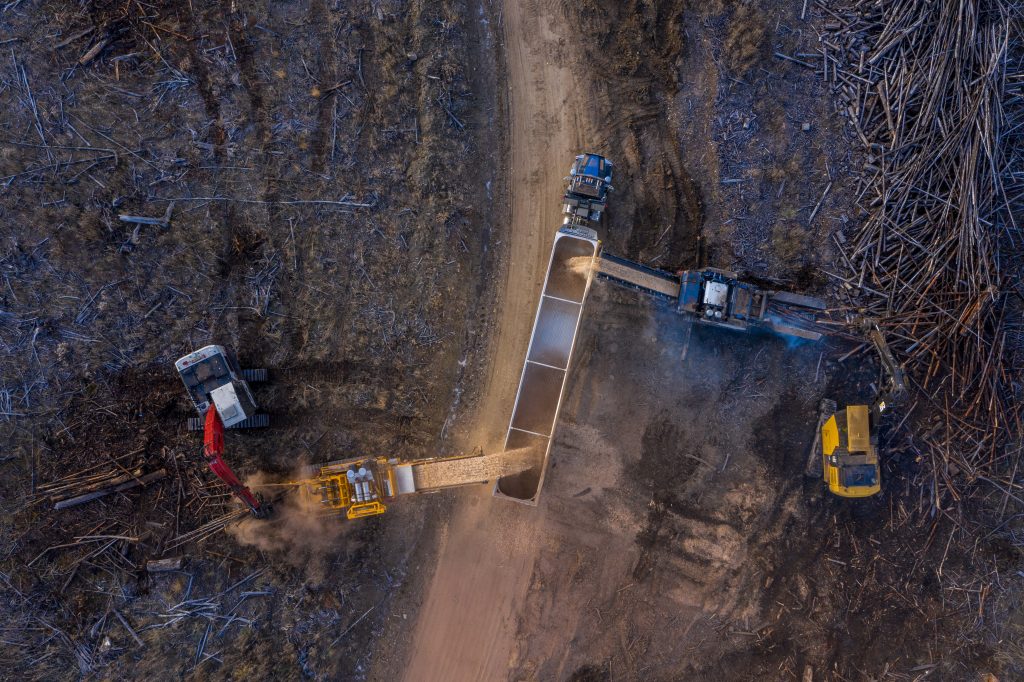 Theriault estimates that about 60 per cent of their gross harvest volume is saw logs and the rest is biomass, either pulp logs or tree tops and branches. “For us to log about 300,000 or 400,000 metres of saw logs in a year, you have to picture at least another 250,000 up to 400,000 metres of slash produced and left in the bush to be burned,” he says.

Theriault and several of Tsi Del Del Enterprises’ employees were involved in a biomass harvesting company called Pioneer Biomass that started up in 2008. Ledcor Group purchased the company three and a half years later. Theriault says the knowledge acquired while running that company has been an asset for the new grinding venture.

“It’s an old pair of shoes for us because we’ve done it before. The operator that we had in 2008 is the same guy running the grinder for us now in 2019. These guys are experienced,” he says.

This time, rather than running a company that depends solely on fluctuating biomass markets, the grinding is just one component of their fully integrated forestry company that is flexible enough to take advantage of surges in the biomass market, which is happening now. With sawmills in B.C. struggling to remain open and running at full speed, secondary users like pellet mills and power plants are turning to alternative sources of wood fibre, including wood chips from harvesting residuals.

“It really is, in a way, a rescission business,” Theriault says. “As opposed to starting up a grinding company as a standalone, for us, it’s just a couple more machines on the logging side. Our overhead is a lot lower this way and the supports like mechanical and the low beds, we already have those in place.”

The joint venture is initially grinding logging debris in forest areas impacted by the 2017 wildfires that came dangerously close to the outskirts of Williams Lake. Tsi Del Del Enterprises is providing the grinding machine – a Peterson 4710, purchased used – and the Williams Lake Indian Band is providing harvesting equipment and access to their lands. 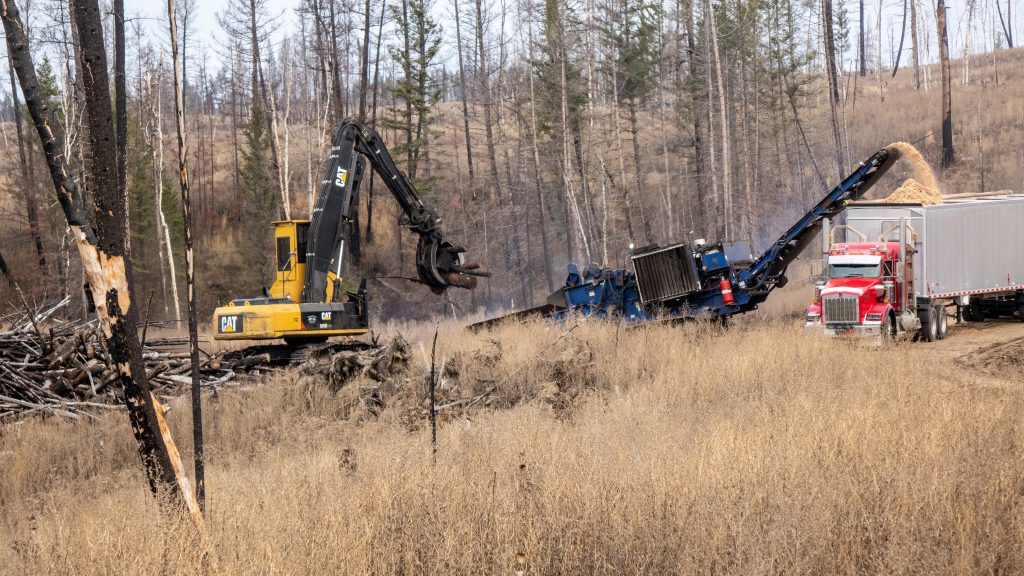 “If you go out to the site today, there’s the Tsi Del Del Enterprises grinding machine and there are Borland Creek Logging machines working side by side. We think that is the future for all of us: using all of the fibre in the stands, not just the saw logs but also the pulp logs and the biomass,” Theriault says.

When it comes to the economics of the grinding business, Theriault says it’s feasible for now within a certain radius of their operations, but it is a fine line affected by transportation costs and government support, or lack thereof.

The Forest Enhancement Society of B.C. has been a major supporter of biomass, and is willing to back sensible projects, Theriault says. “As long as the province of B.C. sees it as an efficient way of using the carbon tax money, I think we’re a winner, especially if you think about all the small northern towns that will lose jobs because of the downturn in forestry. These are the same people, and the same jobs. The skills are transferable,” he says. “This is how we can save the little towns like Quesnel, Williams Lake, 100 Mile House, Prince George, Williams Lake, you name it.” 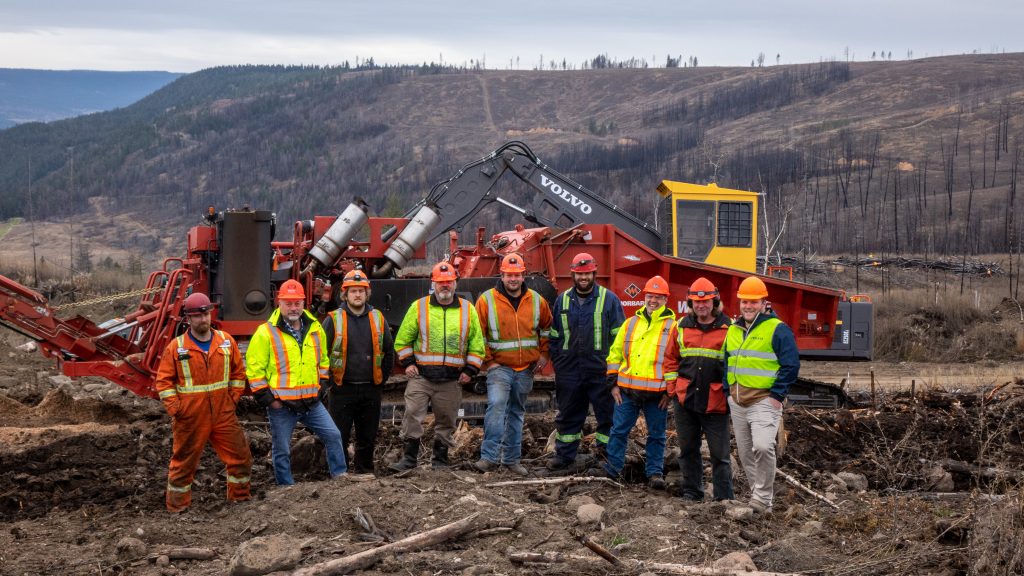 Tsi Del Del Enterprises’ end goal is to take on all phases and all aspects of forest management, from initial harvest planning to silviculture and rehabilitation of burn areas to promote forest re-growth and sustainability of the local wildlife.

The diversification has so far brought stability to the logging company, which managed to stay active during the past summer when most loggers in the Interior took downtime as sawmills in the region announced closures or curtailments.

“The fact that Tsideldel First Nation has always been very proactive makes it so that it’s one of the first First Nations that’s going to reach the goal of touching every aspect of forestry as opposed to being a specialist of one phase. That diversification should bring stability to the company,” Theriault says.

“Our production has dropped a bit in the current downturn, about 20 to 25 loads, but Phil and his crew are trying to be innovative so that all employees are getting some kind of paycheque every two weeks,” Guichon adds.

When all is said and done, the community-owned company’s mandate is to help create a stable future for the First Nation, and that means making long-term, sustainable decisions for its people and its forests. And that is what makes Tsi Del Del Enterprises the ideal forest steward.