It was very early on a July morning this year – at 5 A.M. to be exact – that Charles Garland realized his 11-year-old son was ready to go to work before he was. They were heading to the mainland from Baddeck, Cape Breton, Nova Scotia (where the family business is based), in order to pick up some parts. It amounts to a long day, but it’s part of the ongoing rhythm of business life at Roy Garland Logging.

“Yes, my son is very interested in the business,” says Charles, “sometimes a little too interested. At least some of the time, he’d prefer to be operating equipment in the bush to going to school.” Charles and his son are carrying on the business tradition of the family, making up the third and fourth generation of family members involved with logging. In the early 1900s, Charles’ grandfather Dave moved from New Brunswick to the middle of Cape Breton for better opportunities and forestry work. His son Roy later cut pulp for the Port Hawkesbury pulp mill when it opened in the 1960s, and the family has been supplying the mill with softwood (mostly fir) ever since. “My father and my grandfather also used to cut a lot of short wood, four-foot lengths, which was loaded onto ships for other markets,” Charles adds.

Roy will be 80 in December, but he is still active in the business, doing important things like sharpening all chains for the harvester. It was back in 1978 that he purchased his first forwarder. It became increasingly tough for Roy to find men to work in the woods over the decades around that point because it’s very hard work harvesting by hand, and this prompted him to buy a harvester in 1999. “It’s a Fabtek and so is our forwarder,” Charles notes. “Fabtek was bought by Timberking and then by CAT a while back.”

Together with John Montgomery (who’s been with the company since 1990) and another recent hire, Charles now harvests 12,000 to 15,000 m3 every year, predominantly on small, private woodlands. They run a single 10-hour shift. In terms of where they log, Charles explains, “We’ve bought a bit of property over the years in the area. It makes it easier to have a steady wood supply, which has been a challenge over the years, a real roller coaster. Sometimes there’s none available. Right now, we have wood lined up in advance, and we can’t always say that, so it’s nice.” They’ve always been able to work in the vicinity, however, and during the last six months, they’ve been able to work only about three miles from the shop.

In 1994, Charles and Roy bought a pulp truck, and, ever since, they’ve trucked all their wood from stump to mill. “It’s nice to know where my material is and never have to worry,” Charles says. “You make a little [profit] on all of it, and have a little something at the end of the day.”

The Garlands have also purchased road construction equipment over the years, including an excavator, dump truck and backhoe. In addition, the business owns two gravel pits, mostly used now to build their own forest roads and landings if they are needed. Both the gravel pits and the ability to do some construction and trucking work came in handy when the Port Hawkesbury mill shut down in the fall of 2011.

“It was a challenge, that’s for sure, and on top of the worry, we didn’t get paid for a really good week’s worth of wood,” Charles remembers. “After the closure, we did some hardwood, shipped studwood and other materials to the mainland, and made it through the year. There was a bit of gravel pit work.”

They’d already made plans during 2011 to build a maintenance shop, but when the mill closed, they considered putting it off. “We decided to keep going and we got it done,” Charles says. “Then the mill was open again and things were back to normal. The price of pulp is down now, but it’s starting to come up.”

When the mill came back online in September 2012 with new owners, Roy Garland Logging received “preferred supplier status,” which has given the business much more operational security. “It means they give us as much work as they can,” says Charles. “When they were shut down with a road closure this winter, they shut down their own contractors and kept us going.”

Roy Garland Logging was also recently nominated for the “Atlantic Contractor of the Year Award” from the Canadian Woodlands Forum, a not-for-profit organization with a mission to improve the efficiency and profitability of woodlands operations, through an ongoing commitment to provide opportunities to exchange knowledge of best practices, technology and innovations. It’s an award that recognizes a good safety record, solid information management, use of new technologies and more, and Roy Garland Logging received second place.

“I started using a GPS handheld about a year ago and it helps out a lot,” Charles says. “It’s great for mapping, finding lines and all the roads instead of using paper maps. I mostly use it to check where things are.”

The award also recognizes community involvement, which the Garlands definitely put an emphasis on. The business supports many local causes and groups, such as hockey teams, snowmobile clubs, the volunteer fire department, yacht club and sailing club, the Lion’s Club and more. “It’s nice to have the nomination and to come in second,” Charles says. “A lot of people could have been recognized, so it’s nice to be singled out.” 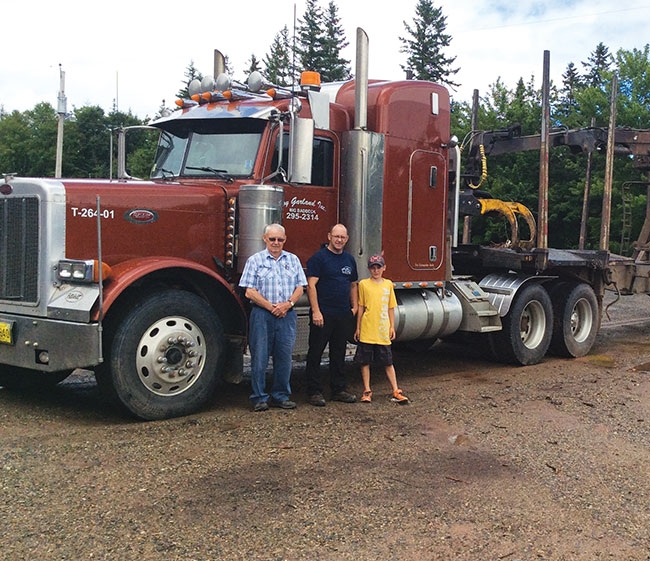 Three generations work in the family business It was very early on a July morning this year – at 5 A.M. to be exact – that Charles Garland realized his 11-year-old son was ready to go to work before he was.
Print this page