Designed for stump-to-stump harvesting or processing at a landing, this head is built to perform with a 25-ton carrier and is a good match for Waratah’s global customer base.

The HTH623C’s hydraulic design, with high-flow characteristics combined with low-pressure drop, provides increased performance and efficiencies in some of the most demanding applications while customer-inspired updates and real-world testing were core to the design of the HTH623C.

Several of the features found on the HTH623C, including the heavy-duty rotator, are shared with the larger Waratah models.

New Tigercat 480 Mulcher
The first Tigercat 480 mulcher sold in Canada went to work in late January. Rod Motkoski, owner of a newly formed company, Motco Mulching based in Edson, Alta., purchased the unit from Wajax. Motkoski intends to service the oil patch with pipeline right-of-way (ROW) being one of the major applications. Other applications include seismic exploration work, road building and general land clearing.

Motkoski describes the pipeline ROW as demanding on the machine, not necessarily because the standing vegetation is particularly difficult to mulch but rather because the job specification requires sub-soil mulching 75–100 mm (3–4 in) below grade. “The below grade mulching is done to easily separate and preserve the top soil,” explains Motkoski. “Afterwards a dozer pushes it aside. They bury the pipe, spread the top soil back over and then plant grass over top.”

The high lift boom on the 480 is already proving to be a great advantage as the machine can easily work over terrain with ravines. At the trough of a ravine, Motkoski can lift the boom to its maximum height and clear the mulching head above the far side of the trough and drive straight up the other side.
www.tigercat.com

Versatile SliceSaw System
The SliceSaw Cutting System from Endeavour Equipment in Grande Prairie, Alta., is designed to offer increased production and reduced maintenance, which the manufacturer says can improve the bottom line.

Available in any configuration for your harvesting, processing and other cutting requirements, the patented SliceSaw Cutting System is available in numerous mounting configurations, including grapples, felling attachments, intermittent bunchers, harvesters, processors, delimbers and more.
www.endeavourequipment.com

Harvester Head  Line-up from Rottne Canada
Rottne Industri AB in the Swedish town of Rottne is well known for designing and building forestry equipment. The company offers a full range of harvesters and forwarders and manufactures its own line of harvesting heads – the Rottne EGS series.

The EGS heads all feature pendulum suspension with flange mounting in the rotator, a spring suspended measuring wheel with hydraulic retraction that is located between the upper delimbing knives and the feeding wheels, and a bar/chain saw unit with hydraulic motor, automatic chain tensioner, and proportional chain lubrication with oil distribution to match the tree diameter. All of the EGS heads feature one fixed and two pair of movable delimiting knives. The bottom knives are proportional controlled and they also act as a diameter-measuring device. 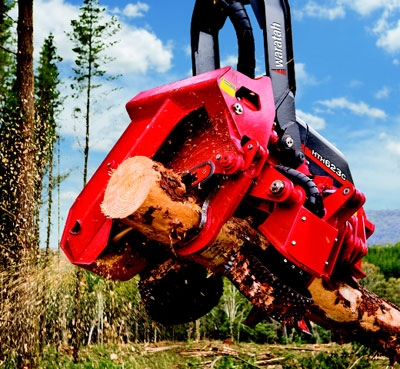