July 31, 2017 - FPInnovations has received the Omond Solandt Award, which is presented annually to a public or private organization that has made an outstanding contribution to operational research in Canada. The award was presented on July 18 by Bernard Gendron of the Interuniversity Research Centre on Enterprise Networks, Transportation and Logistics, and was accepted by Francis Fournier, Director of FPInnovations’ Québec laboratory at a ceremony that took place within the IFORS 2017 Conference in Quebec City. 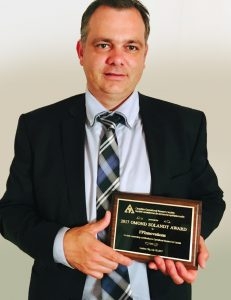 The Omond Solandt 2017 Award from the Canadian Operational Research Society was given to FPInnovations to highlight its commitment to research, particularly through its promotion of operational research in Quebec and in Canadian industrial practice as a whole. Over the past 15 years FPInnovations has been at the heart of the NSERC Strategic Research Network on Value Chain Optimization (VCO) and of the FORAC (de la FORêt Au Client) research consortium, which are two major university networks geared toward optimizing the supply chain in the forest sector.

“FPInnovations is pleased and very honoured to receive the Omond Solandt Award in recognition of the sustained work accomplished by our organization in various operational research applications,” said Pierre Lapointe, president and CEO of FPInnovations. “First and foremost, the award bears witness to the importance of collaborative research with our government, university, college, and industrial partners and confirms the impact of our work on our peers and collaborators.”

FPInnovations has also created a research group dedicated to developing modelling and decision-making tools for implementation in the forest sector, including several from operational research work. These efforts have made it possible for the organization to appropriately position itself to meet the analytical challenges of the future associated with implementing the Industry 4.0 concept. The organization also has many achievements to its credit in relation to operational research within its various areas of forest-to-mill activities, such as its FPSuiteTM integrated process control platform.

Omond McKillop Solandt, a first-generation operational research pioneer, was elected as the first President of the Canadian Operational Research Society (CORS) in 1958. During his career, he received numerous honours and left a rich heritage as an ardent defender of operational research within the public service, the army, and the industrial world. Since 1978, the award has been given to many renowned organizations, including to WestJet, IBM, and Mitacs over the past few years.