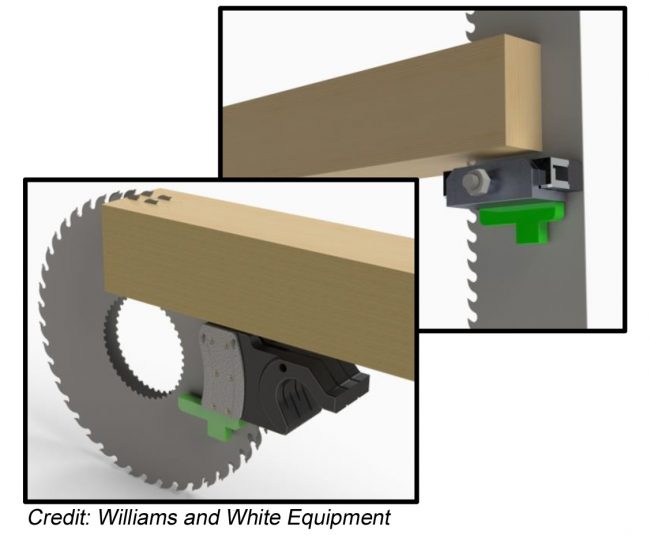 The recent development of a circular saw temperature sensor represented a huge advantage for sawmills: by making the measurement of saw temperature possible, it offers users with real-time feedback of saw performance data. This technology, developed and tested by FPInnovations, will now be commercially available further to a licensing agreement with Williams and White Equipment, who is now manufacturing and selling the sensors.

The saw temperature sensor developed by FPInnovations’ Advanced Wood Manufacturing group was designed to accurately measure the temperature of a circular saw blade during cutting. The technology then wirelessly transmits the data to a computer, which displays a chart of the temperature changes over time and can help avoid loss of saw stiffness.

Previous experimental and mill tests in several sawmills and on multiple saw machines confirmed that monitoring saw temperature during sawing provided useful information to diagnose sawing and lubrication issues. It was also shown how to compute the cooling capacity of the guide lubrication system from the recorded temperature data. The sensors can be used continuously for day-to-day monitoring of saw temperature, or installed when needed to trouble-shoot a sawing problem.

The saw temperature sensing technology is now commercially available under Williams and White’s SMARTGuides. Powered by SAWSense saw performance monitoring system, the technology accurately measures, in real time, the performance of the saw when in the cut for both circular and band saws. This provides real-time feedback of saw performance data to the user to inform the mill of the effect of varying sawing parameters.

Benefits for the sawmill include: