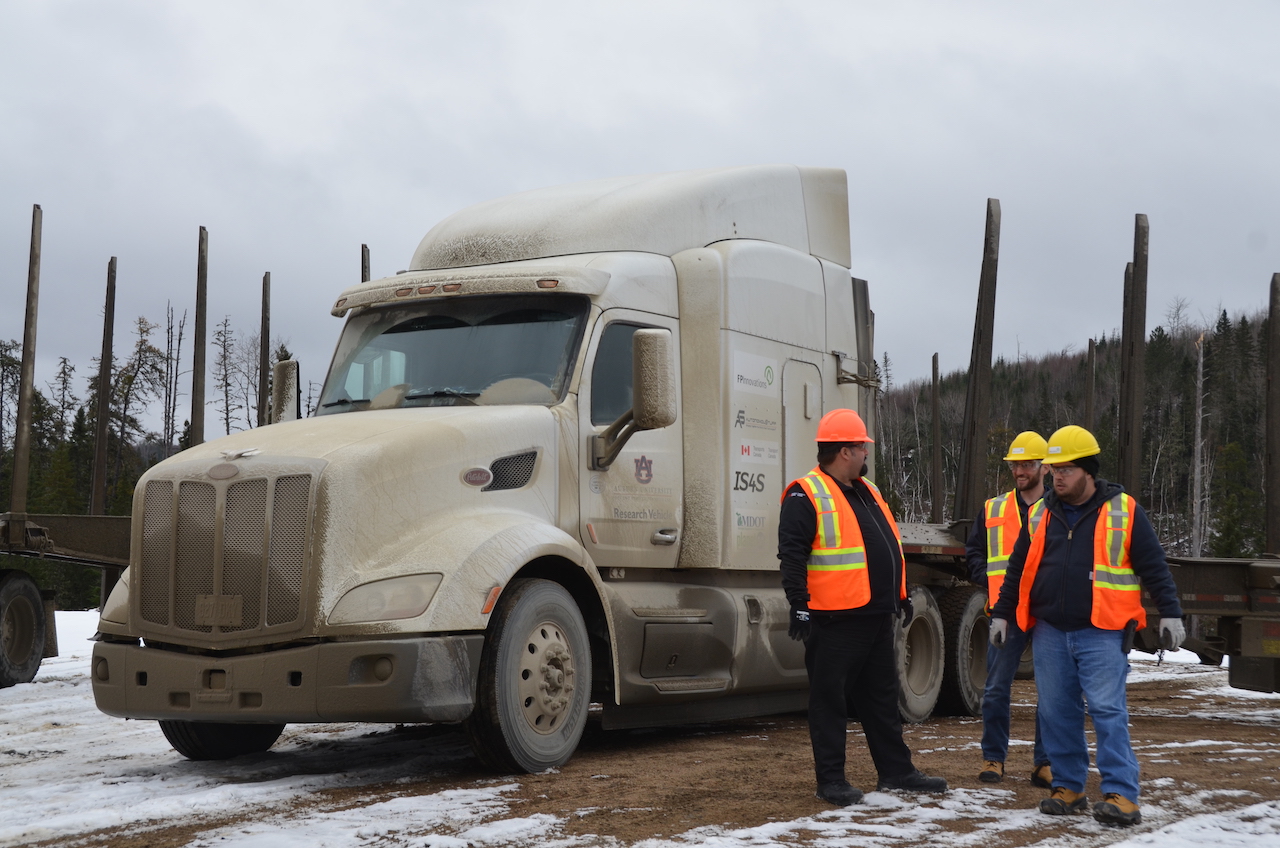 FPInnovations and its partners recently completed the second phase of development testing of a two-truck platooning system, this time evaluating the lead truck’s ability to control the steering of the vehicle behind it.

The research organization, along with Transport Canada, Alabama’s Auburn University and Resolute Forest Products, began testing truck platooning on forestry roads last November, when it successfully trialled the technology in the forests of Quebec.

The long-term objective in testing truck platooning technology is to find a solution to the industry’s driver shortage, Édouard Proust, an advanced vehicle engineer at FPInnovations, tells CFI.

The technology, which links trucks through a computer system that can maintain a desired distance between trucks, control acceleration and braking, was initially developed by Auburn University for use on highways. The system uses a dedicated short-range radio communications protocol approved for communications at high speeds, a GPS system and radar technology, amongst other sensors.

The first trial in Canada, held in Rivière-aux-Rats, Que., focused on how the system can handle the acceleration and braking of the second truck, also known as the following truck, Proust explains.

“This year, we went one step further, by evaluating the lateral control of the system over the following truck. We were mainly looking at steering control,” he says.

In this second phase of development, which also took place in Rivière-aux-Rats, several test runs were conducted over 1,000 kilometres, the majority of which were done with the steering control activated. “We’re very happy about that,” says Proust.

The following truck followed the lead truck based on “path replication.”

While drivers are still at the wheel of the trucks as a safety measure while the platooning system is engaged, this second phase of development also allowed FPInnovations to test the system in conditions more similar to resource roads, to see how it handles more extreme conditions and identify any areas where the technology needs to improve.

“What we do in the forest industry and the natural resources industries is definitely not the same as on the highway,” Proust elaborates. “We have steeper grades on our roads, we have tighter turns, and we have road conditions that are sometimes more challenging. So, it’s not necessarily a complete redesigning of the system that’s needed, but more of a fine-tuning and adjustments here and there to be able to accommodate for these conditions.”

During this second trial, the partners hit a few bumps in the road. For example, the high vibration level of resource roads was not something the system had dealt with before, Proust says.

“But after a couple of adjustments, we were able to complete the evaluation plan as decided before, and so this was not a major hurdle for us.”

The trial also revealed a few other challenges that need to be addressed in the next phase. For example, log trucks operate in fairly remote areas where GPS reception can be spotty, and the road grade impacts the system’s ability to maintain a set distance between the two trucks.

In the next phase, FPInnovations and its partners will fine-tune the system based on the results of these tests and explore higher levels of autonomy.

“The objective is to do another round of development, and, as soon as we can, come back on the road to test them and keep pushing the system’s limits further,” says Mathieu Blouin, FPInnovations’ business development manager.

“The next phase will be to start testing on a broader scale,” Proust adds. “To have trucks that are not only testing for a couple of weeks in a row, but testing for months or years in a row to get more mileage, more conditions, and test the system a little more.”

“We need to make sure that those systems are efficient,” he elaborates. “Part of the next phase will be to be able to do the full cycle. This will allow us to evaluate all work components, like loading the trucks, and evaluate the impact on cycle time. Ultimately, the logistic has to be adapted to this technology and ensure a good economical performance.”

Going forward, FPInnovations will also be working with other industries to help answer those questions. After the success of the first trials, companies from other sectors, such as mining, saw the opportunity the technology presents and voiced their interest in participating, Blouin says.

“With more people working with us, bringing other expertise, we hope that it will accelerate the pace of development,” he says.