Aug. 3, 2017 - Just off the winding Sea to Sky Highway running along the coast from Vancouver to Whistler, B.C., the unique wooden architecture of the Squamish Adventure Centre beckons tourists to stop in. 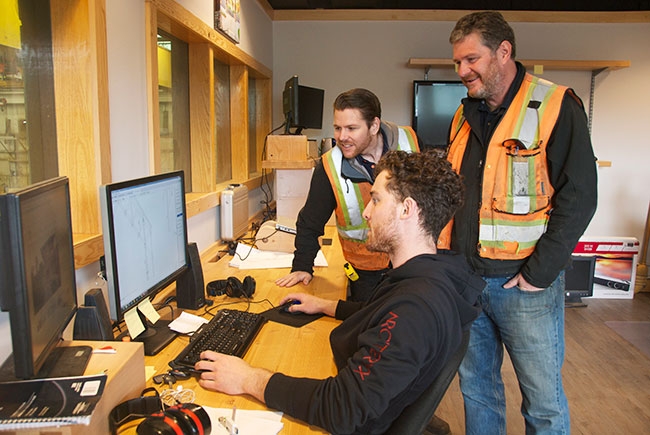 Innovation is central to FraserWood Industries success says owner Peter Dickson (right). Keith Murray Just off the winding Sea to Sky Highway running along the coast from Vancouver to Whistler

The building is almost entirely made of wood. The timber roof is shaped like two massive discs jutting out of the centre of the structure almost like wings, separating the building into two sections.

The company behind the eye-catching structure is Squamish’s own FraserWood Industries.

FraserWood opened its doors to Canadian Forest Industries in early April to show us how they turn cants into strong and beautiful custom timber products at their facility in Squamish, B.C.

The company has been in operation since 1998 when owner Peter Dickson purchased a radio frequency (RF) kiln from his former employer, Canfor. Today the company not only operates two RF kilns to dry massive timbers, but has expanded into custom planing and re-sawing, joinery and CNC milling and glulam.

The bulk of FraserWood’s customers are timber framers, but they also sell to building supply centres and log home builders. With a staff of more than 30 including scientists, engineers and R&D specialists, last year was the most productive in the company’s history, with more than 1.5 million bdft of high-value timber passing through the facility.

“We’re into solving problems,” Dickson explains. “When challenges come up, we look at what we can do to marry structural realities of a building with pleasing aesthetics.”

As a result, FraserWood has earned a reputation for finding beautiful wood product solutions that fit the specific needs of its customers. Along with the Adventure Centre, the company was involved in the construction of the Sea to Sky gondola and the O’Siem Pavilion in Squamish. FraserWood’s beams have also been sent overseas; they were used to create a beautiful wooden art sculpture in the lobby of a luxury hotel in Dubai.

RF drying
After only a few years of operating his RF kilns in the late 90s, Dickson expanded his business with re-sawing and planing services in 2001, and in 2003 with the CNC Hundegger joinery machine.

Still, two RF kilns – one bright blue and the other tomato red – are the heart of FraserWood’s business model, offering an efficient drying process for high-quality timber in order to create a stable product.

While a conventional kiln uses heat and airflow to remove moisture from wood, the RF kiln uses radio frequency.

“For 2×4 dimensional lumber the conventional kiln is perfect, but when you get into 6x6s, 8x8s, 10x10s and 12x12s, the percentage that is actually dried is less and less because only the outer shell is getting dried.  It’s with these timbers that RF drying works well,” explains Keith Murray, director of sales and marketing for FraserWood. RF kilns use radio waves to dry large cuts of wood consistently throughout the cross section.

Both RF kilns are relatively small; they can fit approximately 20,000 bft in a charge. Like playing Tetris, operators build a solid blocks of wood approximately four feet wide by five feet high, free of gaps, and leave it in the kiln for four to seven days.

“The length of time depends mainly on the season and also how recently it’s been cut. If it’s fresh out of the river and soaking wet there is more moisture to remove,” Murray says. They target between 15 and 19 per cent moisture content, depending on the product specifications. A portion of FraserWood’s business is just RF drying for customers who require a stable product that is dry throughout the cross section. “We also oversize the material so that we’re able to re-saw it straight after drying,” Murray says.

From cant to mantle
Almost all of FraserWood’s business is custom orders – from full timber-frame homes to masterfully designed mantles. Ninety per cent of the fibre that passes through is Douglas fir with the rest a mix of red cedar, yellow cedar and hemlock. Their main supplier is Andersen Pacific Forest Products, a specialty sawmill in Maple Ridge, B.C.

Wood arriving at the Squamish facility is first sorted and tagged for its intended project and then either RF dried, conventionally dried or left as green lumber (most likely RF dried). Once out of the kiln, the cants are moisture checked and staged for the project before heading to the Timberwolf band saw to be squared; some products are finished at this point. The rough-edge of a band saw creates a finish that some customers are looking for, Murray says.

Timbers next head to the Pinheiro planer to be surfaced to pre-determined sizes. Some products that are now complete are then packaged.

Other jobs that require fabrication move next to the Hundegger K2 5 axis joinery machine, which can be followed by a Hundegger planer. Some projects that are too large for the machines or require further chiselling, drilling and/or sanding head to the handwork area of the facility. The projects are then finished with stain or other treatments.

director of sales and marketing (middle) and Kane Seward

The company is also in the process of installing a new Rex four-sided planer at the Squamish facility that will help speed up production. The Pinheiro will then be moved down to the McMinnville facility.

“We have to grow, but we have to grow at a pace that we can manage,” Murray says. While FraserWood is eying further expansion into the U.S. market with its acquisition in Oregon, there are always challenges with ramping up, he says. “Because we have such an established way of doing things here and it works really well – we’re able to identify quality issues early in the process to deal with them.”

Innovating
Over the years, a large part of FraserWood’s success is attributed to innovation from the staff that Dickson hires. Upstairs in a well-lit room overlooking the shop, project managers, many of which are UBC wood science graduates, using various CAD (computer-aided design) programs get the ball rolling for new customers by designing wood-based structures.

“Some of our products came about because people were asking for something different and Peter is willing to explore, experiment and innovate,” Murray says.

Two of FraserWood’s trademarked innovations are its GrainMatched and EdgeMatched glulam. As with all glulam timbers, the products involve sliced timber glued together to maximize strength of the wood. FraserWood then takes the product to the next level. GrainMatch glulam involves slicing up a cant, drying and processing the laminae separately and then reassembling to ensure the grain is matched and nearly indistinguishable from solid-sawn timbers. EdgeMatched glulam uses standard lamstock that is edge-glued with thick vertical grain strips of clear heartwood.  These edge-glued laminae are then finger jointed and pressed together thereby creating a clean, clear, and uniform looking glulam.

Dickson is also a product of an earlier version of the UBC wood science program. “We’ve got a lot of wood science people, mostly because I know they have an interest in wood,” Dickson says. “That’s been critical to our success.”

FraserWood is part of two research projects this year, one of which is led by FPInnovations to test the use of glulam for constructing moment frames, or moment-resisting frames – a rectangle of beams and columns used in the construction of buildings. These frames, typically built from steel, are used for structural strength, often in earthquake-prone areas where there is potential for lateral forces on a building.

The second project FraserWood is involved in is through the Timber Framers Guild (FraserWood is a member) to test fully dried timbers versus green timbers in certain applications. The project involved testing the strength of posts, beams and braces first assembled with pre-dried components and second assembled with green components and then dried to simulate the wood shrinking over time. Results from both projects should be out sometime this year.

For Dickson, innovation is hard work, but it’s a do or die mentality for the company. “I believe there’s some truth to the idea that you grow or die, mostly because your people want to grow and do more complicated and challenging things,” Dickson says. “I hope innovation will continue to be a big part of our future.”