May 16, 2014 - Liquid natural gas has been a trucking fuel for over a decade in North America, but has yet to secure a foothold in the Canadian heavy haul marketplace. In western Canada, that trend is starting the change, as operators begin to see the technology in action and understand the value of the investment.

In Salmo, British Columbia, the team at Sutco has taken advantage of the opportunity to add LNG trucks to its fleet. They came across LNG in discussions with Inland Kenworth, one of Sutco’s primary equipment suppliers and a company that has ample experience with the technology in the U.S. market. Inland has been using the LNG fuel systems designed by Westport, whose global headquarters is located in Vancouver.

“We have had strong service support from Inland Kenworth for almost 20 years,” said Sutco president Chris Sutherland. “They’ve been servicing the Westport products for many years in their U.S. locations and we believe their extensive knowledge will be beneficial.”

For Sutco, the first opportunity to test the LNG trucks came in August of 2011 when Chris worked with Westport’s Stu Monahan for a hands-on test. He was very impressed with the performance of the LNG, which performed as well or better than the diesel trucks in his fleet.

“The power is all there,” says Chris. “I’ve been driving trucks for twenty years and I have to admit I was a bit skeptical at first, but when I got behind the wheel of the demo truck I was immediately impressed with the power. I knew these trucks would be successful in their designated application.”

The primary stumbling block for using LNG is the upfront cost. Trucks equipped with LNG cost approximately $95,000, significantly more than the same truck would cost using diesel. That investment is worth the money, as the tanks have an expected shelf life of 20 years and can be re-installed on subsequent trucks. That’s in addition to the environmental cost benefits, which is estimated at a 27 per cent reduction in greenhouse gas emissions over diesel. But the upfront cost can be a tough pill to swallow for most companies.

Enter FortisBC, a company that supplies energy to approximately 1.1 million homes in British Columbia. FortisBC has a grant system in place that assists with the cost of converting to natural gas. Sutco knew about the grant system, applied for funding for six LNG trucks, and received approval for the grant. As a result of the grant, Sutco placed the order for the trucks in June of 2013, and the trucks were delivered by the end of the September.

There was still the issue of fuel that needed to be addressed. In B.C., there is no corridor for fuelling, so all trucks must come back to the hub. Sutco hoped to set up a distribution site, but instead looked to a third-party to provide the fuelling service. Sutco worked with ENN Canada, who has since established stations for LNG fuel in Chilliwack and Merritt. The fuel is purchased from FortisBC, and ENN provides both the station and the pumping service.

“Past history and new technology point to a stable fuel management future with natural gas,” explains Doug Sutherland, vice president of Sutco. “We believe this will close the gap between the capital cost of LNG vs. diesel, and enable us to meet our commitment to reducing greenhouse gas emissions.”

With six trucks now on the road for Sutco as of February 1st, the drivers are adjusting to the LNG trucks.

“The drivers have bought in,” says Doug. “There is no power difference and less noise. There is a progressive shifting difference, but they were trained on that by Kenworth.”

Sutco is one of the first companies in Canada to adopt the LNG technology, and so far, the guys are happy to be in the trucks. 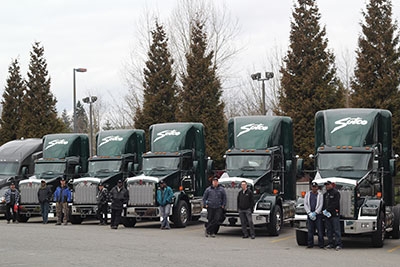