Oct. 23, 2013 - As trucking fleets have looked for ways to reduce their carbon footprint while also slashing their fuel costs, natural gas has commanded most of the attention. And for good reason. A national fuelling network has slowly begun to take shape, a wide variety of natural gas trucks and engines have come to market, and the fuel is abundant and, compared to diesel, inexpensive.

There has been a decoupling of the price link between natural gas and diesel, with gas costing about 30 per cent less. That spread is expected to grow, even though there’s an expectation that road taxes will eventually be applied to natural gas if the trend towards gas continues. That will invariably close the price gap, but not enough to deter some early adopters from making the switch.

But while the trucking industry in the US and Canada has gone ga-ga over gas, one truck and engine manufacturer has been touting the virtues of a lesser-known alternative fuel, which it claims offers significant advantages over natural gas. Volvo Trucks North America shocked the industry in early June, when it announced it will introduce a truck in 2015 that will be powered by dimethyl ether (DME). The North American market will be the first to see a DME-powered Volvo truck, though it has tested the fuel extensively in Sweden. There, black liquor produced by the forestry industry serves as the most commonly
used feedstock.

Liquor on board
DME is a manufactured fuel that can be made from a wide variety of methane-containing feedstocks, including black liquor, grass clippings, cow manure - and even natural gas. Volvo is the only manufacturer that has been publicly pounding the DME drum since as far back as 2005, but the limited availability of DME fuel was a major barrier to its commercialization. Then along came a California start-up called Oberon Fuels, which developed a proprietary manufacturing process that enables it to produce DME cost-effectively on a small scale. Suddenly, DME was a viable fuel, and Volvo moved quickly to announce the launch of the industry’s first DME-fuelled truck in 2015.

So, what does Volvo like about DME? For one, it addresses all the shortcomings of natural gas. Nothing will overcome diesel as the most efficient, energy-rich fuel for heavy trucks. Liquefied natural gas (LNG) and DME both offer about half the energy density of diesel, while compressed natural gas (CNG) packs a quarter of the punch. The biggest deterrent truck fleets cite against transitioning from diesel to natural gas is the high up-front cost of the trucks themselves. They can cost $30,000 to $90,000 more than a diesel, largely because of the expense of the onboard fuel tanks.

Both fuels present their own unique challenges. CNG is stored at 3,600 psi and LNG at temperatures of -260 F, so in both cases some highly specialized, thick-walled, composite tanks are required. DME, on the other hand is stored onboard the vehicle at ambient temperatures and at about 72 psi, and as a result, only requires a simple stainless steel tank. It doesn’t boil off like LNG when sitting and the fuelling process is fast and simple.

On a molecular level, DME has no carbon-carbon bonds, and as a result it produces no soot whatsoever, eliminating the need for a seventh injector, smoke limiter and even cooled exhaust gas recirculation (EGR) and its related – and often problematic – EGR cooler and valves.

“This engine design gets us back to basics,” said Ed Saxman, alternative fuels marketing manager with Volvo Trucks North America.  In some respects, it’s a simpler base engine than today’s diesels, without the EGR and with significantly lower injection pressures required.

Prototype DME-powered trucks from Volvo are currently being run by tanker fleet Martin Transport in Texas, with a range of 960 km; enough to satisfy most duty-cycles. At this time, DME is only
viable for fleets operating regional haul or return-to-base vehicles, but many forestry fleets would fall into that category.

Self-made fuels?
Oberon Fuels has developed a business model they’re prepared to bring to Canada, which would see them build, own and operate a DME production site at a customer’s own facility. They say they can produce the fuel at about the same cost as diesel, using whichever feed stocks are the most readily available. The skid-mounted, modular production units are being offered in 17,000 to 38,000 litre per day sizes (4,500 to 10,000 gallons), which would fuel about 65 to 150 trucks, respectively. However, there’s one fly in the ointment for forestry companies wanting to convert black liquor to DME for their fleet of trucks.

“Our process doesn’t work with black liquor,” said Elliot Hicks, COO and co-founder of Oberon Fuels, who hails from Saskatchewan.

Still, the Sweden experience would suggest that enterprising mills could find a partner capable of converting black liquor into DME, though the cost may be significantly higher. Alternatively, a forestry company could partner with Oberon and source alternative feed stocks, including organic waste, cow manure or natural gas.

Test drive
Volvo’s initial DME offering will be based on its D13 engine and be rated at 425 hp with 1,750 lb.-ft. of torque, but a 500-hp version will soon follow. The engine itself is remarkably diesel-like in performance. I took one of Martin Transport’s DME-fuelled Volvo VNLs on an hour-long drive around Sacramento and it drove, pulled, and sounded exactly like a diesel. The engine takes slightly longer to crank, but it’s still in prototype stage and that will be addressed before production models begin rolling off the assembly line. The performance of the DME engine I drove was nothing short of amazing, when you consider the fuel is, or can be, made of waste.

But still, fleet operators aren’t going green just so they can sleep better at night. They’re looking to build a business case, and natural gas offers a sound payback in just a few years. If DME costs the same as diesel and the trucks cost the same as their diesel counterparts, what’s the benefit?

Volvo’s Saxman told me that for companies that truly want to do right by the environment, DME may well be the cleanest option available. Not only does it burn clean, it’s created from renewable resources and actually prevents harmful methane emissions from waste such as cow manure or spoiled food from entering the atmosphere. CO2 is actually consumed in the production process, making DME not just carbon-neutral, but carbon-negative, particularly since the fuel is created on-site using local feed stocks.

There’s also the peace of mind that comes from no longer being at the mercy of outside-of-your-control global issues that can cause diesel prices to fluctuate wildly. War in the Middle East, or a refinery fire in Alberta, can cause diesel shortages and price spikes. Saxman also pointed out that oil prices are expected to increase long-term, and DME prices will be unaffected by the price of crude, so while the cost of the fuel may be similar today, there could be significant savings in the future.

It’s unlikely that DME will displace diesel as the primary source of power for heavy-duty commercial vehicles anytime soon. But fleets with a ready supply of feed stocks now have a compelling new option to consider 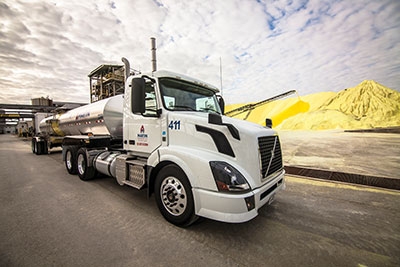 CFI’s Log Haul took one of the DME trucks for a one-hour test drive.“The performance of the DME was nothing short of amazing As trucking fleets have looked for ways to reduce their carbon footprint while also slashing their fuel costs
Print this page