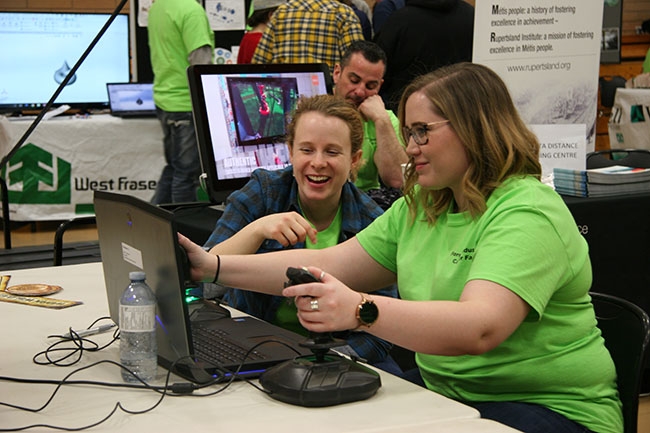 About eight years ago post secondary forestry programs in Alberta faced critically low student enrolment. Some semesters had so few people enrolled the programs were in jeopardy of closing. Today those same programs are at or over capacity.

It’s no coincidence that over the past several years the Alberta Forest Products Association (AFPA) has run a student outreach program that is correcting misinformation about the industry and offering career advice to youths.

The program, called Work Wild, engages with young people on their turf – in classrooms and online. Program manager Ann Normand estimates that Work Wild has visited more than 200 schools across Alberta since its inception in 2011.

“If you go into a school in Calgary or Edmonton verses a forest community, of course there is going to be a difference in knowledge. A lot of the students and teachers in forest communities have relatives in the industry. But most people are open minded and want to learn and have a good discussion where we can address misconceptions about careers in forestry,” Normand says.

Across Canada the forest industry is faced with an aging workforce. Fewer and fewer young people are choosing forestry as a career. In Alberta that concern is compounded by stiff competition for skilled labour from the oil industry.

In 2010 the AFPA surveyed youth in four Alberta forestry communities and a suburban Edmonton community to gauge the extent of the problem.

Work Wild officially launched in 2011 to counter those inaccurate perceptions. The program involves a website, social media and outreach, and is designed to share three key messages:

“Our initial focus was on youth in communities where AFPA has operations; letting them know that there is a good, local employment choice that is environmentally sustainable. They’re seeing the activity taking place in their communities so they know what’s already going on,” Mulligan says.

AFPA hired a community liaison to run Work Wild, and in the first year he visited about 50 communities to introduce the program and share its messages.

While the website and social media are important components of the program, Mulligan says it’s the in-person events that are core to Work Wild. “We know we need to get out there and have people on the ground,” he says.

Work Wild, like any outreach program, has evolved to address the concerns of the students it targets. More and more that means sharing forestry’s sustainability story, Mulligan says. If the industry doesn’t speak up about their efforts to maintain healthy forests, students will turn elsewhere for their information, he says.

Individuals and companies have a role to play as well. “People who work in the forest industry don’t necessarily talk about what a great place it is to work. But I think that’s starting to change,” Mulligan says.

Normand came on board in 2012 and has overseen the program as it has evolved to include more and more urban communities, Indigenous communities and agricultural communities. “If you look at enrolment at post-secondary forestry programs, a significant portion of students is coming from urban centres. It used to be more from resources communities,” Normand says.

The economic shift in Alberta over the past few years served to reinforce Work Wild’s message that forestry is a steady, long-term career. “We’re not competing with oil and gas as much. It has really solidified the message that while the wages are not the same, they are good and there is stability in a forestry career,” Normand says. “Lifestyle is something that we always highlight – very few of these jobs involve living in a camp.”

“Some teachers are really keen and ask more questions than the students do – and they ask good questions!” Normand says.

More staff members means Normand is freed up to find new ways to share the forest sustainability message with youth, such as through video. “Work Wild is about careers, but if we don’t inform people about the issues and how we’re addressing them, they may not consider forestry as a career,” she says.

The program can indirectly measure its success by student enrolment for the forestry programs at the Northern Alberta Institute of Technology (NAIT) and the University of Alberta.

“They’re the easiest barometer for us to see if it’s working or not. The program at NAIT in 2010 was almost dead – it didn’t have enough enrolment to support it. It has since been way over-subscribed. That’s been happening over the past three years. The University of Alberta was similar. They’re now at the point where the program is completely full,” Mulligan says.

“The numbers are great and that’s huge. We might actually replace the retiring workforce,” Normand says.

Find out more at www.workwild.ca.