June 9, 2017 - Without fail, Kelly McGlynn, the owner/operator of McGlynn Contracting based near Grande Prairie, Alta., will walk the block of his next harvesting location. 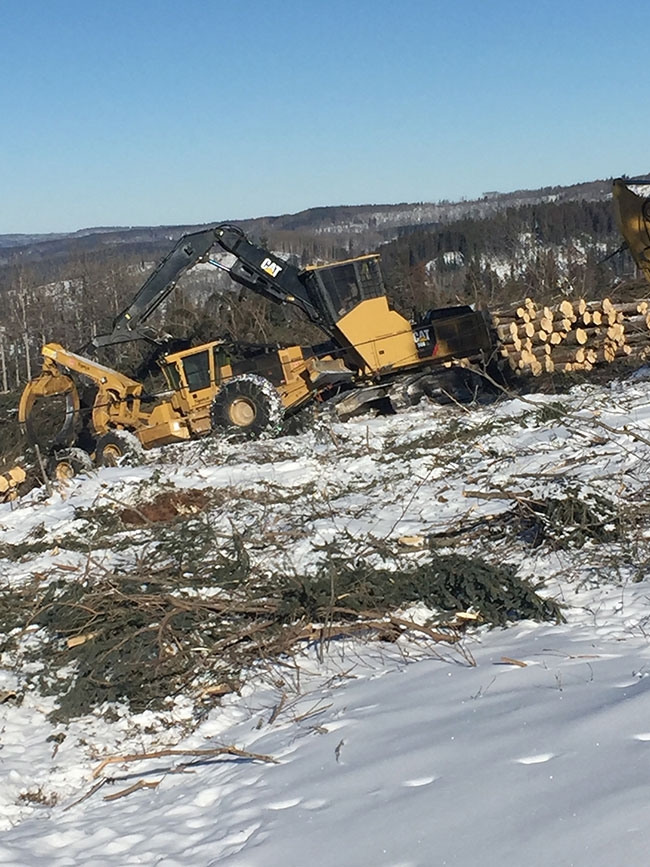 McGlynn Contracting based near Grande Prairie Without fail

It was during one of these walks last April that McGlynn and his son, Kyle, trudging through the Alberta foothills, found they had a problem.

“We quickly realized as we got into the terrain that our skidder would struggle. With the amount of uphill pulling that we’d have to do, we needed something to assist us – some sort of winch,” McGlynn says.

Hills are unavoidable in northwestern Alberta. The slopes do not compare to those tackled in coastal B.C., but McGlynn wanted a solution to lost time due to slow harvesting methods on the broken terrain.

McGlynn Contracting is a two-year old company with about 14 staff members that harvest 225,000 metres plus each year, mainly south and southwest of the city. McGlynn started the company with his sons Scott and Kyle to supply three mills in the area: Weyerhaeuser lumber mill, Canfor SPF dimension lumber mill and Norbord OSB mill.

The contractor harvests roadside, cut-to-length, mainly pine and spruce on a terrain that includes both flat, wet ground and up to 70 per cent slopes. McGlynn’s solution to the slopes came in the form of a neon green winch system – the T-winch, designed and manufactured by Ecoforst, based in Austria.

McGlynn first heard about the T-winch at a logging conference. The logger wasn’t convinced, but fast-forward to his walk with Kyle a month later and the pieces came together.

“We had a situation where we were going to need some help because there was just so much uphill pull which would exceed our machines. We were looking at pulling up 55 to 60 per cent slopes only because it wasn’t possible for us to build a road at the bottom. We had to pull it up,” McGlynn says.

The logger arranged to have Markus Krenn, managing director with Ecoforst visit his operations. “I explained to him that I’m not looking to go steeper, I just need my skidder to go uphill at a faster speed,” he says.

With the support of Woodland Equipment Inc., the Canadian dealership for the T-winch, McGlynn purchased the machine in September and his crew began experimenting with it shortly after. There was a learning curve, he says, but the machine has far surpassed his expectations.

“When I come up the hill with the skidder now without the winch, I have to come up with half a grapple. If I’m at 40, 45 per cent slope I can do it, but I have only half the load,” McGlynn says. “Now, since I’ve purchased the winch, I can come up the hill with a full grapple every trip, and I’m still coming up almost four kilometres per hour – almost the speed you would travel on flat ground.”

McGlynn Contracting based near Grande Prairie

Hitting the slopes
The T-winch is built with a diesel engine and a double pump unit with adjustable delivery volume that powers the closed hydraulic cycle of the winch transmission as well as the open cycle of the auxiliary functions. A 2,220-mm plate provides stability in addition to anchoring, and 500 metres of high tensile strength, 18.5-mm diameter rope promotes long operating life. The machine is controlled via a radio system.

McGlynn found early on that the T-winch was limited somewhat by the nature of the cable system. “I needed to modify the way we were using the machine,” he says. “It’s only good for about a half hour in one spot and then you have to move it. You can only work 10 to 15 degrees out of line with it.”

McGlynn now uses a pulley that attaches the T-winch to his 350 Komatsu hoe. “I park the winch machine 200 to 300 metres down the right-of-way road and I would just move the hoe every time the skidder needs to move. It sped everything up.”

The three-machine system, using the hoe, the T-winch and a 635E Tigercat skidder, allows the loggers to keep up near normal operation speeds on the hills and in otherwise inaccessible areas.  The system has needed some tweaking, and is on its third pulley, but McGlynn says he’s confident with their new, homemade pulley system they have what they need to make it work. “The steepest spot we’ve pulled up is 60 per cent,” McGlynn says. “I’m not going to say we walked up it fast, but we came up it with a full load in the grapple and it’s awesome. As far as working goes on the steep ground, you can’t beat it.”

The rest of the McGlynn Contracting fleet includes a 748 John Deere skidder, and two 870C Tigercat feller bunchers with modified harvester heads to cut 33 inches in one pass, up from the usual 24-inch cut. For processing they have a 330LC-9A Hyundai with a log loader cab and a QS630 Southstar processor, a R3026 Hyundai with a QS600 SouthStar processor, and a 260 Barko with a QS500 SouthStar processor. Log loaders include a 568 CAT and a 3026 Hyundai, and for road building a 350G John Deere excavator, D6T Cat, and a PC350 Komatsu excavator.

Exceeding expectations
It’s not just the hills that present challenges for McGlynn Contracting. Last year was unusually wet in northwestern Alberta and many contractors dealt with soggy ground conditions throughout the summer and fall.

Hoping to solve the ongoing problem of skidders sinking in the muddy ground looking for traction, McGlynn decided to hook up the T-winch again. “I wanted to see what would happen, so we hooked the winch up to the skidder and we were able to skid in ground where we couldn’t have pulled without the winch. It was a bit of a surprise.”

The crew isn’t using the T-winch system everyday, but it’s an important solution to maintain the pace of the daily grind. The operators are all fully on board, McGlynn adds. There was an adjustment period for dedicated operator, Terry Davidson, but he’s now happy to be running the winch machine, which he controls from the skidder. “It takes the stress off of me because I know my operator is not going to roll and we’re not going to be blowing up rear ends and taking out motors because the machines are sitting at such an angle for so long. It’s speeding production up and saving wear and tear on my big skidder,” McGlynn says.

The T-winch costs about $270,000 so it’s not a small investment for McGlynn, but the contractor is confident future use will see payoff soon. “Now we know how to work in the steep and soft ground so we’re ready for this summer. It’s going to make a huge difference.”