June 18, 2014 - The Canadian Woodlands Forum’s Spring Meeting focused on innovating to reenergize the forestry sector now that demand for the region’s wood products is rising. Elizabeth Beale, CEO of the Atlantic Provinces Economic Council, confirmed that the region’s economy is improving though it remains slower and weaker than at the national level.

One of the issues identified in her keynote address is that employment is steadily contracting in rural areas. This trend has been seen nationally, but it has only recently started to affect the Maritimes where the economy depends on resources to generate jobs.

Beale also confirmed there’s a rising number of older workers but very poor job growth for young people. This trend is going to continue to be a serious problem for the region.

Globally speaking, the economy is expected to continue to grow in 2014 due to emerging economies and the advancing middle class in Asia. This will mean an expanded need for more homes and goods in China, for example, and this demand will filter through to all resource producers.

But the globalized economy requires innovation, Beale explained. “Improving productivity and developing the higher end of the production cycle is vital to our industry.” The innovations she named include advanced building supplies and building systems and the development of biochemicals.

Dean Toole, Regional Coordinator and Project Manager for the Canadian Wood Fibre Centre (CWFC), also talked about innovation. He spoke about the Enhanced Inventory project the CWFC has been working on using remote sensing technology and his group is commited to finding new uses for wood chips since the pulpwood sector has declined in the region and chips are underused. Fibre optimization in the regions sawmills will reduce the number of chips being produced. His team is looking at new techniques and best practices for the most economic use of wood fibre.

The afternoon split into two concurrent sessions, one of which had a large group of contractors and suppliers attend whose intent was to identify common issues and discuss solutions for logging contractors. Many expressed concern over the new Tier 4 technologies - will they have increased maintenance costs? When will the Tier 3 machines be discontinued? Dealers in attendance confirmed they would continue to provide Tier 3 machines until they run out of the components or legislation forces the switch.

Other attendees spoke about the need for more education from suppliers to help them get optimal use of their equipment including on board diagnositcs. In response, one supplier said that it can be difficult to schedule training sessions because training requires the operator to take a day off of harvesting.

Taking a show of hands, the crowd confirmed that many contractors in attendence aren’t using the new technology that has been supplied with their machines. Most manufacturers have developed software that will produce productivity charts and other information that can be invaluable for fleet management but can be intimidating to learn. One attendee, however, noted the software can be intuitive for the younger generation who are often more comfortable with technology.

Once the sessions were over, the group gathered for a charity meal and silent auction, Log-a-Load, for kids. Proceeds raised went to providing life-saving equipment and professional health care for local children.

Canadian Woodlands Forum attendees also had the opportunity to attend the Atlantic Heavy Equipment Show. Guests were welcomed to a showroom packed with forestry, construction and other forms of heavy equipment that drew  industry professionals from throughout the region.

Exhibitors fought through ice pellets, snow storms and faced highway closures as the region was pelted with a relentless spring storm early in the week. Forest machines were caked in snow as they were brought into the hall to be prepped for the crowds. When the doors opened, however, the exhibitors were ready and the booths were full of heavy machinery.

The show started out slowly on the first day as many people were apprehensive about venturing out onto the highways after the storm. But day two was a busy one, with crowds gathering early and line-ups throughout the day, making it the single largest one-day tally seen in the history of the event. There were 13,877 attendees in total at the heavy equipment show. 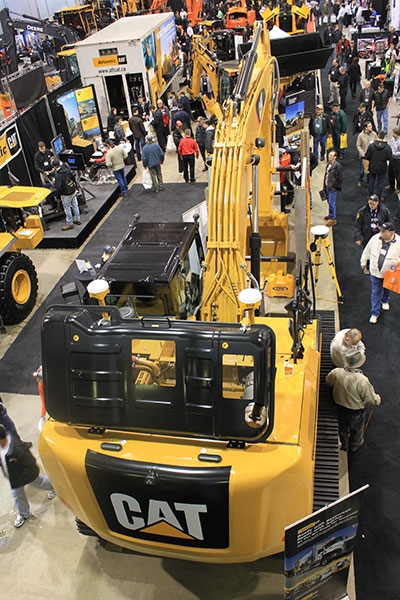 The Atlantic Heavy Equipment Show was a busy one The Canadian Woodlands Forum’s Spring Meeting focused on innovating to reenergize the forestry sector now that demand for the region’s wood products is rising.
Print this page