Northern Ontario phase-contractor Dan Fraser values his people. His company has grown and contracted depending mainly on labour markets. He knows the job is not for everyone, so when he does find people who stick around, it’s worth investing in the right equipment for them. 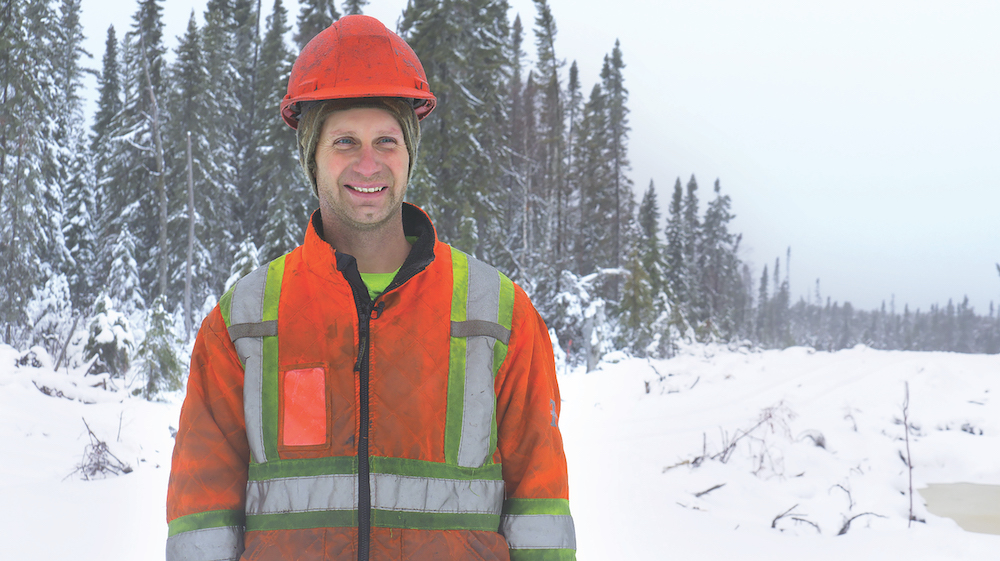 Dan Fraser has been in the logging industry for more than 20 years, starting out as an operator for Thunder Bay outfits before moving to Longlac, Ont. Photo courtesy Waratah.

At 43-years-old, Fraser has been in the logging industry for more than 20 years. He started in his early 20s as an operator for outfits in the Thunder Bay area before moving to Longlac where he continued working for those larger companies. About eight years ago, he took the jump into ownership, incorporating as a single-phase harvesting contractor.

“We were a little larger a few years ago. But everything is tough – the whole industry – including finding employees,” Fraser says. He’s downsized as a result and now employs just two other operators.

The downsizing is not unique to him, but rather a symptom of region-wide changes to the forest industry in Northern Ontario, Fraser says. Today there are no longer stump-to-dump contractors working in his area. Instead, mills employ a handful of small phase contractors like Fraser.

A few years ago, Fraser made the switch from feller bunchers, skidders and delimber-slashers to a single harvester and forwarder. 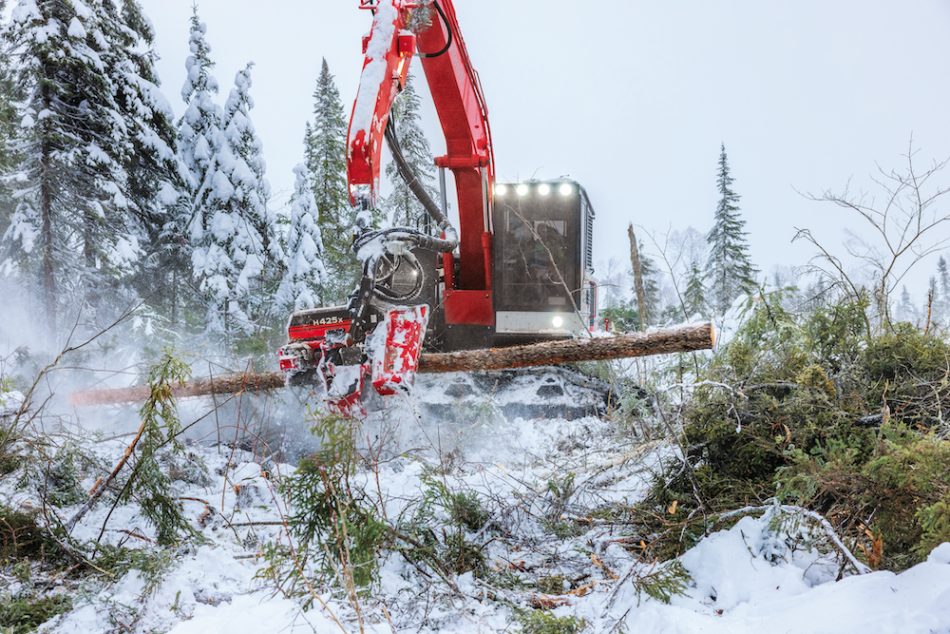 “We were in the dinosaur years, per se, in Canada, I would call it,” Fraser says. “A few years ago, I added a roadside processor and then two years ago, I bought a forwarder. We started by following the buncher and processing the bundles at the stump and forwarding it out. Now, six months ago, I traded my buncher in for a harvester. We’re now harvesting direct at the stump.”

Fraser says his motivation for the change was to run a smaller operation without compromising profits. And that is exactly what happened. His fuel costs alone are nearly half of what they previously were.

“I run a bit smaller crew now. We’re cutting a bit less wood, but at the end of the day it’s a lot better for myself. It’s more profitable,” Fraser says.

The biggest challenge in making the switch was training his operators. Fraser had been trained on both machines in previous jobs, so he was able to take on the training.

Even before switching up his harvesting style, Fraser would typically replace his equipment every two or three years to keep up with the latest technology advancements.

“It’s a nice head. It’s very fast. It was a little bit more learning again for even myself just because it’s 100 per cent harvester head and it’s a bit different to get used to than the 622,” Fraser says. “The 622s are a tried-and-true battle-axe of the forest industry, I would say. The 425 is more like running a sports car. It’s a little more delicate but it’s very fast.”

The H425X has what Waratah calls an “extreme duty” main saw box with beefed-up steel plating, extra feed motor component guarding and hose protection. The head is designed for durability in mixed stand harvesting, and especially in large timber.

Fraser works with Itec 2000 – a logging equipment dealer out of Thunder Bay that set him up with the Eco Log, Link-Belt and Waratah machines. “The service with them is one of the best around here. That’s the biggest reason I went with that package,” he says.

The Eco Log 594E forwarder is a 2018 model that Fraser purchased in 2019. The machine will average about 22 cubic metres a load going an average distance of 400 metres with excellent fuel economy, he says. In the next year or so he’ll be looking to upgrade that model. 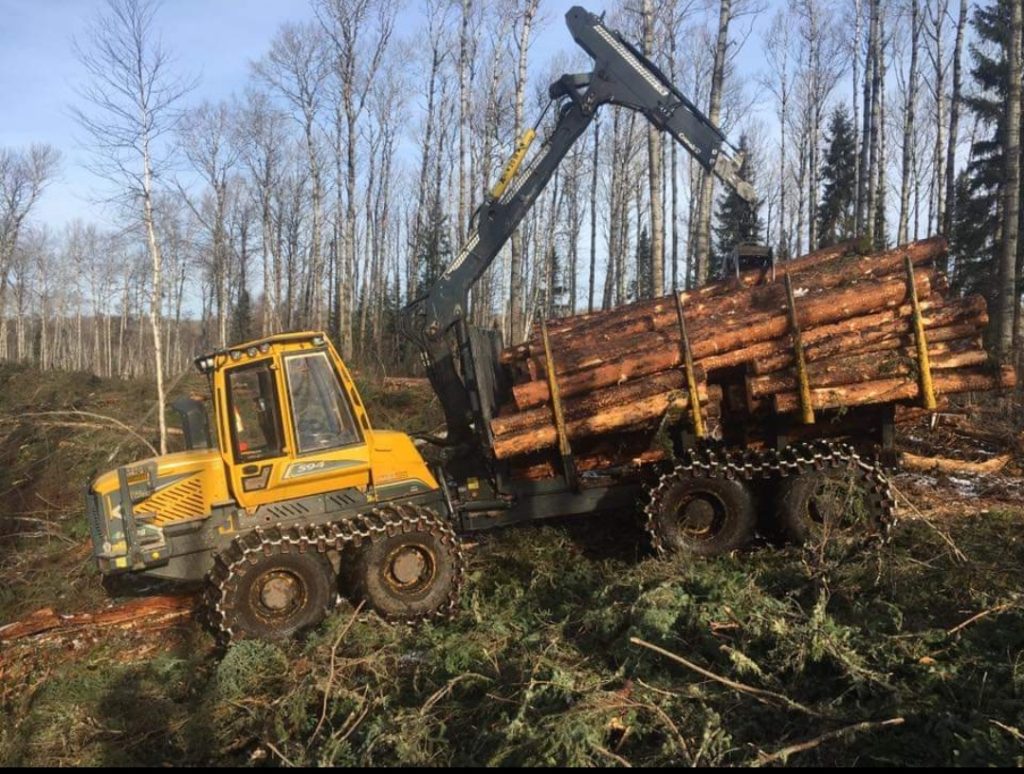 At its height, Dan Fraser Logging ran four machines, with a subcontractor running another four, with a combined 12 to 15 employees cutting between 150-180,000 cubic metres a year.

“Labour was a huge issue up here. I dropped down to one buncher and dropped a few guys for about a year-and-a-half before we made the switch to harvesting at the stump,” Fraser says.

For young people especially he finds it a tough sell. “I’ve trained quite a few and given a few chances and some of them have left and went to other companies. It’s a tough market with employees. Once you have them, you have to treat them really well. You have to stay competitive to keep them. There is not a lot of loyalty in the woods anymore,” Fraser says.

Another important lifestyle aspect to the job for Fraser and his employees is that they are able to go home at night. Their cutblocks are, on average, an hour’s drive from Longlac. Now that they are cutting a bit less than before, and with a new harvesting plan from AV Terrace Bay that includes larger cutblocks, they’ll be spending longer at each site before moving on to the next.

With all the ups and downs for the forest industry over the past few years, Fraser says he sees the industry settling to some extent in Northern Ontario. Markets are strong and he expects the industry will be taking advantage of that.

“I’m going to always log, as long as it’s around here. I love it. It’s me and I can’t see myself doing anything else. I’ve tried other things in the past – I’ve tried the oilsands and mining a little bit – and even in between breaks in the logging industry I went and tried different things, but I always come back to this,” Fraser says.

Related
Conference Season
From horse logging to horsepower: the evolution of Mattey Bros.
Changing the forestry game: OptiLog to look at the future of harvesting technologies
Telematics, GIS, AI, truck platooning and more at OptiLog