July 31, 2018 - The oldest of seven boys, Leo Eby grew up on a dairy farm with his family. Whenever his dad didn’t need his help on the farm, Leo would help out at his neighbour’s sawmill. 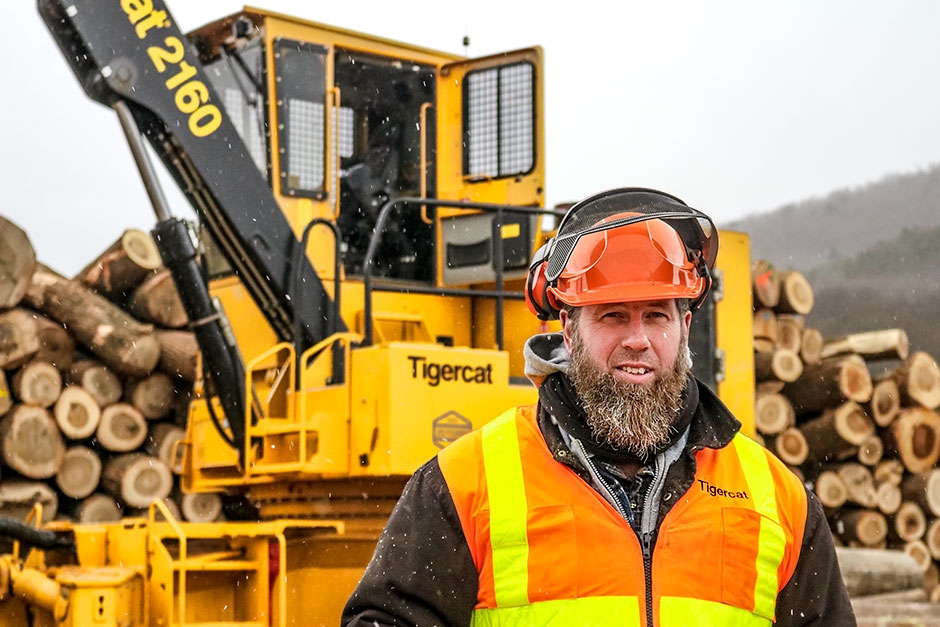 The dairy industry wasn’t for Leo — he was always more interested in the lumber business. In 1987, when Leo was just 18 years old, the neighbour’s mill was upgraded, providing Leo an opportunity. He and his older brother Arnold decided to purchase the old equipment and whenever they weren’t working on the farm, they were tinkering and running their new sawmill. The company continued to grow and in 2004 Leo’s father opened up an official business account for them. “Although my father wasn’t a lumberman, he loved the accounting work and played a critical role as the company grew. Us boys did the lumbering part of it and he took care of the accounting, did our taxes, did all our IRS returns, payroll, things like that,” explains Leo.

Seven jobs for seven brothers
The business started as a three-way partnership in 1988. Leo’s father owned 20 per cent. Leo and Arnold each had a 40 per cent stake. In 2005, his next three younger brothers, Conrad, Llewellyn and Durrel, bought into the business, making it a six-way partnership today. Meanwhile in 2002, the company started a satellite business retailing landscape products such as mulch and bark. Leo’s brother, Keith, managed the business over the years and in January 2018 it was spun off and Keith took over as sole owner.

The youngest brother, Richard grew up helping out in the sawmill but chose a different path from the rest of the boys. He enrolled at Hershey Medical Center, recently completing a degree in medicine. The Eby boys are a bright and determined bunch to say the least. 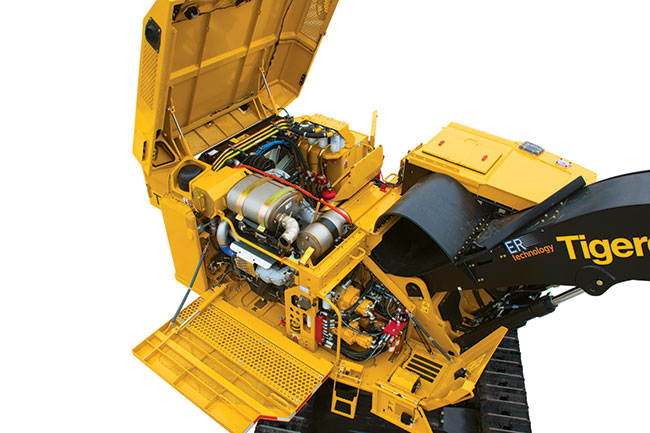 The mill: adversity and opportunity
In December 1998, the company had a disastrous fire that destroyed the entire mill facility. The family had to decide whether or not to rebuild. They decided to rebuild on a new location on the farm and invested in better equipment and improved technology. “We got started in a new mill in April of 1999 and so May of next year will be 20 years at our current location,” states Leo proudly.

Located in Clearville, Penn., Eby’s Sawmill resides on a 30-acre lot with a large wood yard and employs 50 people, not including family members. The company produces approximately 15 million board feet annually.

“There is a lot of sorting going on at this mill. We are also handling saw logs, containerization for export, and shipping a lot of low-grade materials to other mills,” explains Leo. The primary interest is high value lumber and veneer logs. However, in the pursuit of these logs, the business gets a lot of lowgrade wood that must be sorted and marketed. 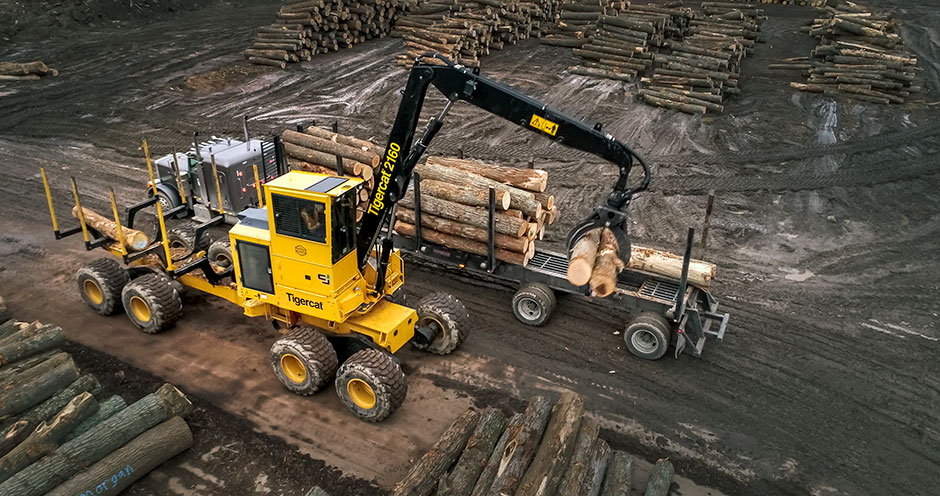 Trusted relationship
Tigercat district manager, Jerry Smeak, sold Leo his TimberPro forwarder back in 2004 when he was working for Lyons Equipment. “The machine became indispensable to me, but there were some things that I wished were better about it,” says Leo. As Leo’s original machine began to accumulate a lot of hours, Jerry had made his transition to working for Tigercat. However, Tigercat did not have a comparable product to suit his mill yard needs at the time. Leo came to the realization he needed to consider a replacement and soon.

“Over the years I had been observing Tigercat and kept in contact with Jerry and I noticed Tigercat’s high quality construction. If Tigercat made a machine in the same category, I definitely wanted to go with Tigercat, but at this point, it hadn’t been built yet,” explains Leo. “I knew that the only people that could achieve my goals was Tigercat. And even though I actually didn’t have any new Tigercat equipment, I knew they were on the cutting edge of good-quality equipment. I also knew Tigercat had a reputation for making equipment that is easier to work on.”

Genesis of the 2160 loader forwarder
In early 2015, Tigercat delivered a loader mounted on an AC16 articulating carrier down to a Georgia-Pacific mill in North Carolina. Jerry and then-Tigercat president Tony Iarocci were planning a trip to visit this new machine and Jerry asked Leo if he wanted to join them. Jerry recalls saying, “Come down to North Carolina with me. You will have an opportunity to talk to the president of Tigercat and you can see if you can talk him into building you a mill yard loader. Here’s your opportunity.”

Leo jumped at the opportunity. He took his mechanic, Rodney Bange, and brother Durrel with him and they drove down to North Carolina that day. Leo took a turn operating the loader with Tony asking Leo, “Why wouldn’t this machine interest you?” 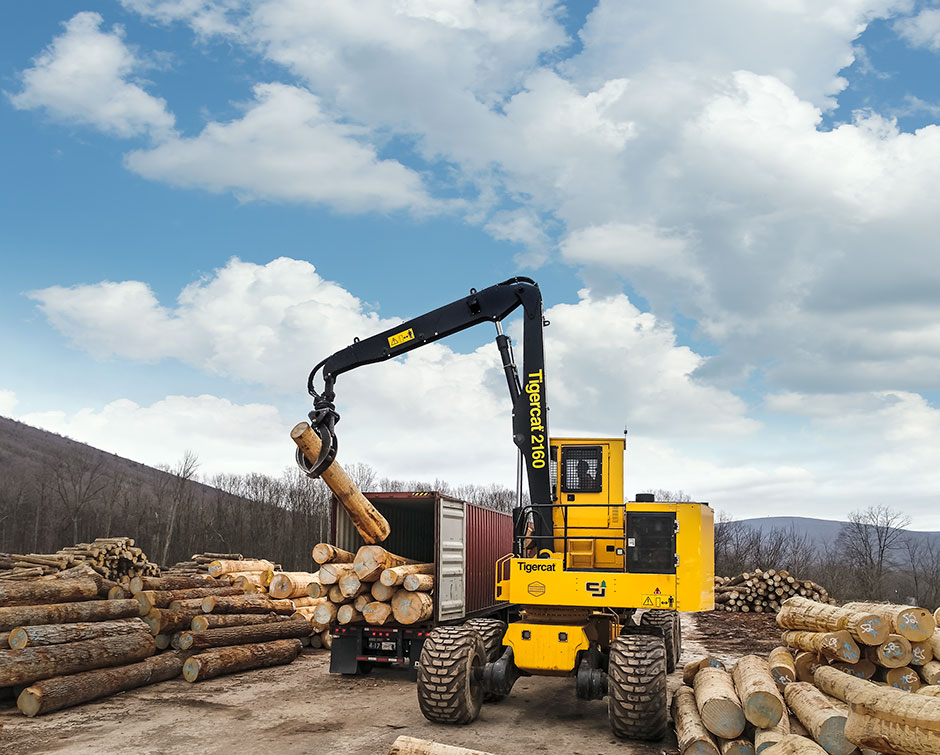 Leo walked him through what he was currently using, what he was not satisfied with and why. Leo explained the application — he needed to unload trucks, load containers, and sort and move logs all over the yard. The machine also needed to feed the mill itself. “That is why it is critical that it has a high load capacity with good travel speed and no outriggers — to keep a continuous flow for the operator,” explains Leo.

“I had Tony’s ear all afternoon and he listened very carefully. I’ll be forever grateful for it. Tony really had no reason to give me his time other than he’s just a nice man. It wasn’t like I was a big customer. There was no real reason for him to give me half a day of his time, but he did,” Leo expresses sincerely.

At the end of the conversation, Tony said to Leo, “I’ll tell you what. This is what I can promise you. I’m going to put two engineers on it and we’ll see what we can come up with. Give us six months.”

About six months later Tigercat and Tigercat dealer CJ Logging brought some early engineering plans down for Leo to look over and critique. “I told them this and that and what to change. Then I was invited to a meeting at the factory in Canada to discuss further details with them.” Tony, Grant Somerville (then-vice-president of engineering), Peter Maljaars, loader product manager, and designer Tim DeVisser all participated. Leo asked Rodney and Durrel to join him and they drove up to Canada. “We had an all-day interaction with the team,” tells Leo. The group spent a half a day in the conference room and after the meeting, the Tigercat designers went back to the drawing board.

Another six months passed. It was October 2016 and Leo got a phone call, “We think we got things right now,” he recalls. So Leo flew up and had another meeting with the team. “This time the team had a concept that I was really, really happy with and so we closed the deal that day,” he says.

It was very important that his new machine have high views out the cab and therefore a sufficient cab riser. “This objective was met. Now when a truck pulls up beside the operator to get unloaded, he can see the top of his load and he can see where his grapple is actually going. Before, the operator almost had to guess where his grapple was actually grabbing,” explains Leo. “Another critical item was service access. Tim went through a lot of pain to design it so that all the components are individually accessible and easy to access and replace.” 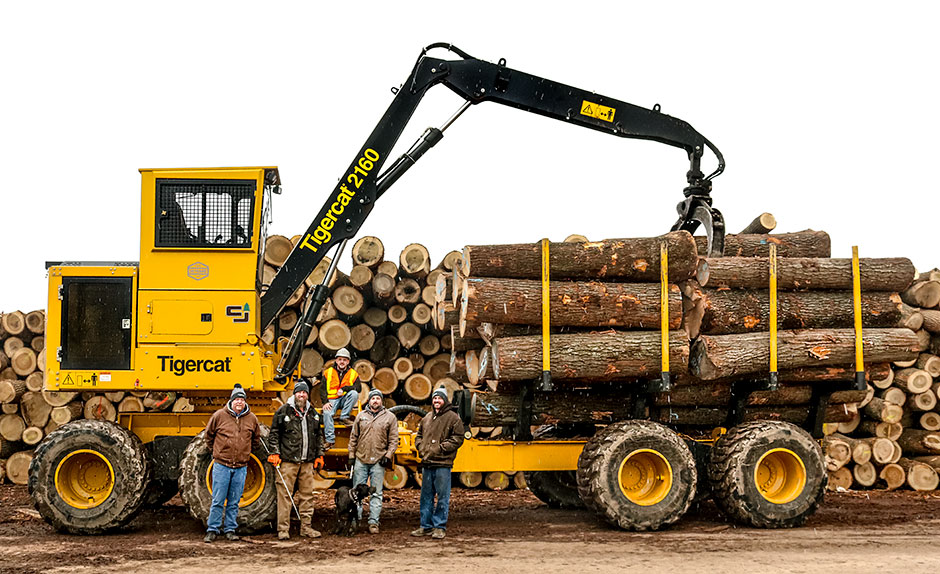 In early October 2017, the machine was complete. Leo, Durrel and Llewellyn flew up one more time and ran the machine in the Tigercat yard. “I was anticipating finding something that wasn’t quite to my satisfaction, but believe me there wasn’t a thing I could complain about. Everything was exactly like I was hoping for it to be. I couldn’t even find one thing that I wanted changed. All the controls were exactly how I hoped. It was more than I had hoped to discover,” explains Leo.

The machine was officially delivered to Eby’s Sawmill in Clearville in November 2017 and has accumulated over 1,000 hours so far. “It is an impressive machine. There are a lot of yard machines available out here but they all move turtleslow across your yard and they all require four outrigger pads to stabilize them. While handy in the right situation, in my situation, I need mobility all the time,” explains Leo. Although he has a lot of responsibility around the mill, he says he looks for every opportunity to jump in and operate the 2160. “It’s just so fun to run,” says Leo.

This article originally appeared in Between the Branches, April 2018, the official publication of Tigercat Industries Inc.

To read more Tigercat Between the Branches stories, visit www.tigercat.com/btb.