In the never-ending quest to improve fuel efficiency and increase truck productivity, fleet owners are in some cases taking a fresh look at some old technologies. 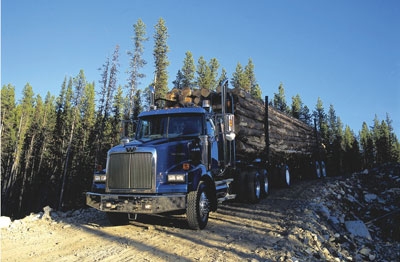 Take, for example, 6×2 drive axles, in which one of the two axles is a free-rolling “dead” axle.

This spec’ has the potential to reduce weight by 400 pounds, resulting in that much more payload or fuel economy improvements to the tune of 2-4%. For a variety of reasons, 6×2 axle configurations never gained much traction (pardon the pun) in the North American truck market because of a number of factors, the most commonly cited being a lack of traction in slippery conditions and poor resale value.

When fuel was less than a buck a litre at the pump, a 2% fuel economy improvement was not worth reaching for. But across the pond in Europe, where diesel is substantially costlier, the 6×2 axle configuration is a mainstream specification, even for off-highway logging applications. In Europe, they’re used to paying $2 for a litre of diesel fuel, and as a result they’ve been forced to get more creative in ferreting out any potential fuel savings.

Here in North America, all the low-hanging fruit has been harvested, with low rolling resistance tires, chassis fairings and speed governors delivering easily attainable fuel savings. Now, some fleets are turning their attention to more radical specifications, and the 6×2 drive axle configuration stands to be among the options getting the most attention.

So much so, in fact, that axle manufacturer Meritor has come out with a new line of 6×2 drive axles and anticipates this segment of the market growing from its modest 3% today to 18% of the total North American axle market within five years. With today’s fuel prices, even a 2% fuel savings can’t be ignored, as it translates to about $1,200 in fuel savings per truck each year. If you run a truck for 10 years, you’re looking at more than $12,000 in fuel savings over the life of the vehicle, and diesel prices aren’t expected to decrease any time soon.

It’s those potential fuel savings that are earning 6×2 axles a fresh look, but detractors will continue to point to poor resale value and a lack of traction as non-starters, particularly in gruelling off-highway logging applications. Let’s first address resale value. When surveying fleets, Meritor found that only 20% of fleets said they were “likely” or “very likely” to spec’ trucks with 6×2 drive axles. Their survey of 500 fleets also revealed a widespread lack of awareness of the benefits of 6×2 axles. Many fleets expressed concerns about the resale value of trucks spec’d with 6×2 axles. Meritor acknowledges it’s a valid concern, and admits that owners could lose up to $5,000 at resale time, based on today’s market.

However, if 6×2 axles do, in fact, experience a resurgence, there will be more demand for pre-owned 6×2 tractors. Some fleets in the U.S. that are now running 6×2 tractors have actually charged a premium for the tractors when sold into their owner/operator fleet, since drivers within the company have experienced the fuel savings first-hand. Still, in Canada, where winter conditions mean a heightened level of skepticism with regards to 6x2s, fears of diminished returns come resale time are legitimate.

The other most common concern voiced by fleets is traction, or lack thereof, particularly in wet, snowy conditions and particularly off-highway. A log truck could find itself spinning its wheels any time the powered axle loses contact with the surface, whether it be due to uneven terrain or slick conditions. When it comes to traction, today’s 6×2 axles are nothing like previous renditions from years gone by – they’re much smarter. Meritor Wabco, Meritor’s North American joint venture with Wabco, has created an ECAS (electronically controlled air suspensions) system, which brings a new level of intelligence to the 6×2 spec’.

“This is a highly differentiated approach to 6×2 applications, which provides several cost benefits to the fleet owner at the point of purchase and over the life of the vehicle,” said Jon Morrison, president and general manager, Meritor Wabco. “The ECAS system will not only improve 6×2 traction and reduce fuel consumption, but will also decrease axle wear and tear, requiring less maintenance in addition to several safety benefits.”

I was initially skeptical of the system’s capabilities, but having watched several demonstrations of 6×2 axles with ECAS, I’ve become a believer. In one such demonstration, Meritor placed a smooth panel with no grip (think hockey board material) underneath the tandem drive axles and then further reduced traction by spraying the tires and the surface material with a soapy solution. With the ECAS system disabled, the wheels spun hopelessly, as you’d expect in such a situation. With ECAS active, weight was immediately shifted to the powered axle and the tractor pulled effortlessly forward.

Meritor strongly advises coupling any 6×2 axle with ECAS. Otherwise, you’re going to experience premature tire wear as a result of excessive wheel spin. In fact, a 6×2 axle shouldn’t be ordered on its own, it needs to be spec’d as a system in close consultation with the supplier, according to Matthew Stevenson, general manager, North American field operations and marketing with Meritor.

When properly spec’d and coupled with ECAS, tire wear will not significantly deteriorate, Meritor claims.

I recently visited the Fletcher, N.C., axle plant where Meritor’s FueLite 6×2 axles are produced, and asked Stevenson if the concept was viable in Canada’s harsh winter climate. He assured me the axles – including a more advanced SmarTandem, which is currently in testing and set to be released next year – have fared well in northern states where winter is equally harsh, and also noted the widespread use of 6×2 axles in logging applications overseas, including in the northern reaches of Scandinavia.

Not long after, I interviewed Göran Nyberg, the newly installed president of North American sales and marketing with Volvo Trucks. He cut his teeth in the business as log truck driver in Sundsvall, Sweden, driving 6×2 timber trucks.

“The 6×2, I think, has proven that it brings another increase in fuel efficiency,” Nyberg told me. “When I was driving logging trucks, I drove that 6×2 in winter conditions and the traction is good. Here in North America, we have technology that will reduce the pressure on the tag (dead) axle if you are in slippery conditions and ensure that you have traction.

From a technology point of view, it works extremely well. We know we gain better fuel economy, now it’s a matter of resale value, which I believe, over time, will improve.”

Any brand of truck can be ordered with a 6×2 axle configuration and Meritor isn’t the only supplier bringing technological advancements to the table. Bendix last year came out with eTrac, an automated air pressure transfer system designed to work with trucks using the Bendix ABS-6 braking system with automatic traction control.

Today’s highly efficient 6×2 drive axles, when coupled with the advanced electronics available through Meritor Wabco’s ECAS or Bendix’s eTrac, seem to have sufficiently addressed concerns about lack of traction in slippery scenarios. How impressed are those of us who’ve seen the demonstrations and reported on the technology? I chair the Truck Writers of North America’s Technical Achievement Award committee, and this year we presented the award, which recognizes the industry’s top technical achievement of the year, to Meritor for its 6×2 FueLite axle with ECAS.