Until Transports Quebec built a by-pass loop for tourists a few years back, you could drive through the picturesque village of St-Casimir, perched on the Sainte Anne River some 80 km west of Quebec City, and never know that the Columbia Forest Products (CFP) hardwood plywood plant existed. Even now that you’re forced to drive right by its gates, few would guess that the plant employs over 60 people in this community of 1,500, or that their future prospects are now brighter thanks to some groundbreaking green products, and recent investments in new technology. 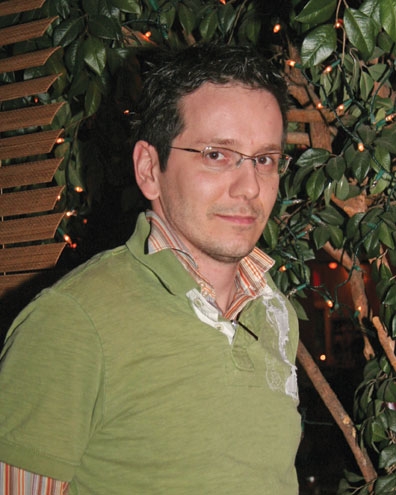 Yet the old plant recently added a new line of products – panels made with a formaldehyde-free adhesive. The new glue is soy-based, and is marketed under the name of PureBond. This green adhesive is the result of research carried out in collaboration with Professor Kaichang Li from the College of Forestry at Oregon State University, and the adhesive producer Hercules Inc., which has since granted an exclusive licence to CFP to market this adhesive technology to the composite wood panel industry in North America. For its part, CFP has embraced the PureBond process, and has converted all seven of its hardwood plywood plants. In mid March 2008, it produced its 25 millionth panel using the soy-based adhesive.

With this green product, CFP has targeted the customers of architects and designers who wish to build structures according to new green building standards. For example, these hardwood plywood panels are qualified for LEED certification (Leadership in Energy and Environmental Design) on any given construction project, and especially for the credits 4.4 for Low-Emitting Materials: wood composite, and will gain builders points under the recently updated NAHB National Green Building Standards. They also comply with tough new regs passed by the California Air Resources Board regarding toxic formaldehyde in wood products, which come into effect in January of 2009.

Now available from the St-Casimir plant, the demand for these green panels is increasing. For Pascale Hébert, production manager, the new product has a bright future. This plant also has its own niche, as it specializes in panels made with foreign or exotic woods. Last year, it made panels from pear wood, among others.

Small plant, big commitment
The 100,000 ft2 plant runs five days a week, on two shifts, with around 50 unionized employees. Four types of core are used: particleboard – intended mostly for the furniture industry and representing 75% of production; hardwood plywood; MDF; and flex panels, which bend easily and can be used for the construction of products which have curved or rounded corners rather than traditional square corners.

Most veneers come from other CFP plants, but also from local suppliers. They are typically maple, yellow birch, cherry, oak and ash. Particleboard and MDF are supplied by Uniboard.

Controlling the plant’s relative humidity is a must for raw material quality, with a constant 45% being the target. In 2005 the plant installed a pipe system along the ceiling that releases an intermittent mist. This system not only maintains the proper moisture content, but controls the wood dust on the floor. This system was entirely conceived by the maintenance team, and has since been installed at another CFP plant. Early modifications included replacing the metal nozzles with paint sprayers to prevent rusting and clogging. The piping will also soon be replaced with plastic pipe.

Manufacturing starts with veneer grading and sorting, currently a manual process. “Experience ensures the success of this manual inspection”, says Hébert, “and our employees have been with us for a long time.” Gesturing to one team member, he adds that “Ghislaine Bertrand, for instance, has worked in the plant for nearly 40 years.”

After sorting comes veneer matching and lay up. This is still a manual process, although CFP is working with a local hydraulics and control supplier, J.R. Perreault, on the design and fine-tuning of a three-bin vacuum feeding system. Still the veneers are thin – between 36 and 42 thou – and so Hébert says that “this system is still in an experimental stage and may need future fine-tuning. Depending on the wood, it is not easy sometimes to take only one veneer at a time. We are still working on it.”

Next comes gluing on a vintage Black Brothers gluer that still runs very well. In 2006, a very simple change was made to this equipment for a mere $45, as explained by the architect of the change, Gilles Paquin, an employee for more than 10 years and operator of the gluer.

“We had to take veneer with one hand, while holding up a 4 ft by 8 ft panel with the other, and then place the veneer on the machine. A 4 ft by 8 ft panel is large, and because of all the lifting we do during a shift, it would be painful because of the repetitive movements,” says Paquin. So two U-shaped hooks were installed. These were stabilized at both ends by a horizontal bar fixed on the gluing machine. This bar can be lifted, so that the hooks hold the panel, and the operator can hold the incoming veneer with two hands. Simple, yet effective enough that Paquin won a prize in 2005 from the Commission de la santé et de la sécurité du travail (Quebec’s WCB).

The panel is then forwarded to the pre-press, and subsequently to the thermal oil-heated presses, which finish the adhesion process. The plant is able to produce hardwood plywood panels with thickness between 1/8 inch and 1 3/16 inch, with two older presses dating back more than 40 years. 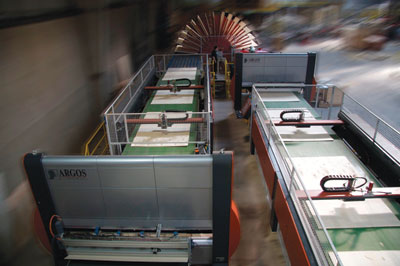 Custom sawing to pre-ordered sizes is on a Celashi unit installed 15 years ago. Then comes the quality control and patching line, entirely conceived and installed by the maintenance team in 2004. Included here is a swivel (for turning the plywood), for easily checking both sides of a panel. This is followed by sanding, QC and grading, processes upgraded in 2006. Panel thickness is measured in real time via a Limab laser sensor system, a device linked to a new plywood surface grading system from Norwegian high-tech supplier Argos Control. The latter captures an image of the panel surface with black and white cameras, and grades it according to criteria for each product (the supplier also makes colour systems). Sensors check for warp, while a hold-down system flattens the panel during scanning. If the warp exceeds the limit of the hold-down system, then the line will be stopped and the panel must be removed. The system has a speed of approximately 120 fpm, and can check panels up to 4 feet wide.

“Lots of our panels must fit easily in the inserts of kitchen cupboard doors for instance. This equipment helps greatly reduce the percentage of returns we see,” says Hébert.

In addition to the formaldehyde-free adhesive, CFP had already shown its green stripes by making core with FSC fibre back in 2001. The CFP plant in Hearst, ON, is a main supplier to St-Casimir, and provides certified wood from across northern Ontario.

Luc Léonard, products engineer at CFP Hearst is also in charge of the FSC supply. “This originated with one customer, Home Depot. They wanted to offer a green product to their customers, and gave preference to the manufacturer that could provide it. So we started to produce with FSC certified wood, because we had to be different in a competitive market,” he says. Yet, he stresses that green products are not yet the main focus of production either in St-Casimir or Hearst. And he regrets the closing in November 2007 of their other plant in Hearst that made particleboard from recycle wood. This may show how much, or how little, clients are willing to pay to be green. “We were a little more expensive compared to ‘traditionally made’ panels, and we had to cut our prices to be competitive. Finally, it was not profitable.”

Still, he adds that architects and designers represent a sector with a bright future for green products “Clients using our certified wood FSC products made with formaldehyde-free adhesive are typically custom shops that make custom products, and architects and designers who want to obtain credits for a LEED certification. There is still a lot of work to be done before these products are totally accepted by society, and are in mass production. But one day, we hope it will be normal to buy ‘green’ products.”