March 8, 2016 - A new forwarder went to work for the first time in North America at a logging operation on Cape Breton Island, N.S. this past November, courtesy of Hugh MacInnis Lumber Ltd. 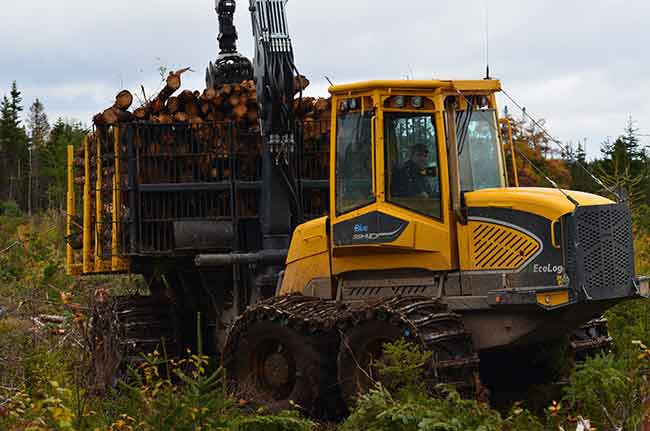 The Frenchvale, N.S.-based logging company took ownership of the first EcoLog 594D forwarder to hit the continent and put it to work immediately in the Belfry area, a short drive from the community of Framboise.

The new forwarder was part of a larger strategy by the company to improve efficiencies and increase annual production that started two-and-a-half years ago.

“It actually started with the purchase of two 2014 845C Tigercat harvesters both equipped with Log Max 7000 extreme heads – one with a top saw and one without,” explains Brent MacInnis, owner of Hugh MacInnis Lumber.

The company previously owned and operated two older harvesters but they were too small for the trees that were being harvested at the time, and there was increased demand for biomass and hardwood, so MacInnis decided to make the investment in new equipment.

“We were also having more downtime than uptime with those smaller machines,” he says. “We made the mistake of undersizing and this time we were going to oversize, no matter what.”

MacInnis checked out a number of different machines available in the marketplace and ended up opting for the Tigercat-Log Max combinations.

“We were more than confident with the Tigercats and Log Max,” he says. “Our production more than doubled and it wasn’t solely on production output, but on the uptime that we were losing with the older gear as well.”

Once production ramped up due to the new equipment, MacInnis found himself with a new challenge. His previous forwarder was also an older model that was undersized for the trees being harvested at his operation.

“We had a smaller forwarder, and with the volumes we were producing it wasn’t able to keep up,” he says. “Especially going with the random lengths and the biomass, the machine was too small so we wanted to go bigger. We were comfortable with a 17-ton because that’s what we had before, but we were afraid to undersize again so we were looking at 19-ton machines. EcoLog just seemed to fit what we were looking for at the time. We’ve got a really good relationship with Log Max in New Brunswick, so technical and parts support is right there for us.”

MacInnis says he was a little hesitant to invest in a machine that had never previously been operated on the continent.

“We were a little nervous about that, but they’ve made us more than confident that the support is going to be there – both in service and in parts,” he says.

The fleet
In addition to the company’s two new Tigercat harvesters with Log Max harvesting heads and its EcoLog forwarder, Hugh MacInnis Lumber also has a 2005 753G John Deere feller buncher, a 2003 CAT 320 with a Fabtech fixed head for harvesting hardwood, a 2005 1710D John Deere forwarder, a CAT 320 excavator for road building and a Komatsu 200 equipped with a chipping head for land clearing.

The company needs a variety of equipment for its diverse operations that include a separate sawmill operation, road building and silviculture businesses, two firewood processors and a trucking operation using dump trucks, in addition to the harvesting operation, which is between 40,000 and 50,000 tons annually.

This is a big change from the company originally started in 1958 by MacInnis’ father, who operated sawmilling and logging operations to service the coal mines on the island.

“By far, most of our product goes to Port Hawkesbury Paper – 80 per cent,” MacInnis says. “But that other 20 per cent is key, because if anything slows down with Port Hawkesbury we’ve still got something else to focus on.”

With a half-dozen operations on the go, Hugh MacInnis Lumber has positioned itself well to face any of its future challenges head on.