Nov. 7, 2016 - Celebrating its 35th anniversary in 2016, major grinder and pulpwood biomass processing machine supplier Peterson is continuing to expand its Oregon facility while fostering the ongoing development of new machines and machine innovations. 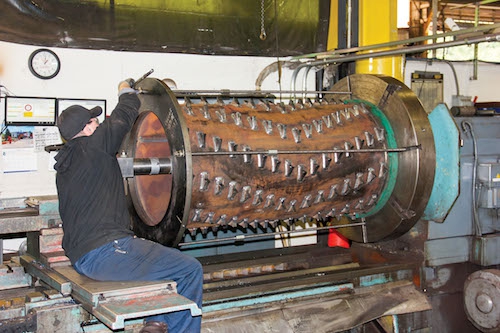 The company has grown from regional equipment innovator to national and now international major player in the chipping and grinding equipment market. In its fourth decade of business, Peterson continues to expand and develop new business, says Marketing Manager Michael Spreadbury.

The activity is adding up to a record sales year for Peterson, Spreadbury says, adding that the land-clearing, pipeline and mulching machine markets are strong, and Peterson’s blower truck line is also doing well.

An example is the 2710D horizontal grinder that was designed as a lighter and smaller machine that better suits the infrastructure in many export markets.

“It’s been very well received for that reason – in addition to being highly productive,” Spreadbury says.

Peterson is also introducing new products at the high end of horsepower applications, with the new 6300B drum chipper that can handle stems up to 36 in.

The unit is powered by a 1,050 HP C27 Caterpillar engine (optional Tier IV engine also available) and features a PT Tech wet clutch. The 6300B offers two drum configurations, one an 8 pocket standard chip drum and the other a 16 pocket microchip drum. An optional grate system redesign allows adjustment from micro-chip to 2 in. chip with the same grates.

Background
Peterson has its roots locally as Wilber Peterson & Sons in nearby Springfield, a heavy construction outfit founded in 1961 by Wilber Peterson, whose son, Neil, inherited his father’s desire to innovate and develop more efficient and productive ways of operating with different types of equipment and innovations.

The company had opened a satellite chip mill in the late 1970s, and the Petersons were soon working on ways to produce cleaner, higher-quality chips. They eventually came up with a chain flail delimber design; Peterson Pacific was formed in 1981 to produce the machines, which gained a loyal following of chip producers.

Founder Neil Peterson worked with paper companies such as Longview Fibre, Union Camp and Scott Paper in demoing the delimber, making multiple trips “back East” to show off the new machine. In 1986 Peterson introduced the 4800 delimber/debarker, followed in 1989 by the Model DDC 5000, which added chipping and made the 5000 an all-in-one machine. Peterson made its first wood waste recycling grinder in 1990, leading to its successful line of horizontal feed wood grinders in use around the world.

As demand for its products gained momentum, the company expanded, building a 60,000 sq. ft. plant in 1993 at its current location in northwest Eugene, and in 2000 expanded again by adding another 50,000 sq. ft. to the manufacturing facility.

In 2001 Peterson diversified into a new product when it acquired the manufacturing rights to BloTech blower trucks. The move into the erosion control and commercial landscaping industries complements Peterson’s grinding machines that produce the mulch used in such applications.

Developments
Another big milestone came in 2007, when Peterson was acquired by Astec Industries.

Spreadbury notes that one of the first things Astec Industries did after acquiring Peterson was make a major $1 million investment in the machine shop. And in the years since, when Peterson has asked for capital investments Astec has stepped up as long as the company is showing progress and a solid plan for the future.

Peterson has moved over the years to bring more of its manufacturing and fabrication activities in-house, to where 98 per cent of all Peterson products are produced and fabricated at the Eugene plant. There, the company operates with more than 110,000 sq. ft. of modern manufacturing space.

And most recently, Astec invested by buying the property next door to the Eugene facility, doubling Peterson’s footprint, and paving the way for future expansion. Though the work will be done in stages, there are already plans to double the fabrication shop’s size.

Full-service solutions
Another big development for Peterson is the addition of the Telestack line of bulk material handling products and telescoping portable radial stackers, a nice complement to Peterson’s chipping and grinding equipment. An Astec Industries sister company, Telestack specializes in handling free-flowing bulk materials of all types, from ores, coal and aggregates to wood chips, pellets, grains and more. The stacking conveyors will be branded as Peterson products and sold and serviced thru Peterson’s dealer network in North America.

Peterson is also the North American distributor for Terra Select screening products. Terra Select offers a full line of trommel and star screens, as well as separation machines to pull plastic, stones, and other unwanted material from the product stream.

“Peterson is now well placed to offer full service solutions for composting and mulching operations that need grinding, screening, and conveying products,” says Spreadbury. “This is a very exciting time for us as we continue to flush out our catalog of full-service solutions in stationary electric or diesel machines, and are now a one-stop-shop for businesses looking for reduction and sorting services.”

This article originally appeared in the October 2016 issue of Wood BioEnergy Magazine.