There are few applications, if any, that are more gruelling for commercial truck tires than logging. And so you could forgive a logger for being cynical about the reliability and practicality of retreads. But what highway fleets have learned, and some off-road fleets as well, is that there’s simply no more effective way to reduce your tire costs than by investing in brand name tires and getting multiple uses out of the casings. 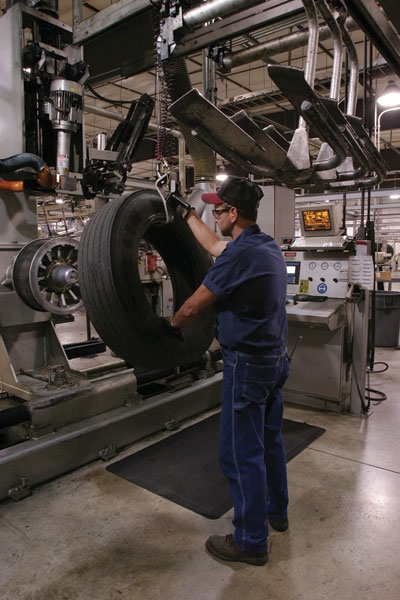 There are few applications

Harvey Brodsky, a retread fanatic who even runs retreaded tires on his personal vehicle, heads the recently formed Retread Tire Association. He says loggers should keep in mind that any quality tire is built with multiple retreads in mind and thanks to application-specific tread designs, reputable retreaders can now provide a tire that’s as durable in its second life as it was in its first.

“All major truck tire manufacturers design their tires for more than one life,” Brodsky points out. A new off-road truck tire may cost $500 but retreading the original casing will usually cost less than half that amount and a good casing can be retreaded four or five times, Brodsky claims.

In fact, he suggests retreading can be even more beneficial to loggers than to highway truckers, where it’s become the norm.

“Loggers beat the heck out of tires, coming down mountains, twisting, turning and running over all kinds of things,” Brodsky admits. “But if he does not damage that casing beyond the point of repair, what happens is he is putting fewer miles on that tire than someone who’s going from Nova Scotia to Victoria, so the casing is going to have more integrity.”

Most Canadian retreaders have application-specific tread designs that are well suited for the rigors of log hauling, Brodsky notes. But that doesn’t mean all retreaders are created equal. Brodsky urges any trucker who’s considering retreading to visit a retread plant – a visit he’s all too happy to arrange (just call him at 831-646-5269). Curiously, he says the trucker should make a point of visiting the restroom when he gets there and inspect it for cleanliness.

Next, Brodsky suggests asking the retreader for his adjustment records.

“Every single retread factory in the world keeps adjustment records. If they say they don’t, you wouldn’t want to do business with them,” he warns. “Those who keep adjustment records are proud to show them to you.”

Top retreaders, Brodsky says, will have an adjustment rate of less than 1%, which is better than those posted by the manufacturers of top of the line new tires, he claims.

“New tire manufacturers dream of having an adjustment rate of under 1%,” he says.

Tire manufacturers encourage the use of retreading and urge customers to consider how many retreads they get out of the casing when calculating total cost of ownership.

“Cost of ownership goes from the day you purchase the tire to the day you scrap it and that includes how many miles you received on the original tread as well as retread before you finally dispose of the tire,” says Greg McDonald, engineering manager with Bridgestone. “If you save $20 on the front end and it never gets to the retread state, you’re losing a lot more on the back end than you’re saving on the front end.”

It’s easy to track the number of retreads a casing has received, since all retreaders are required to stamp the sidewall of the tire with a retread code that includes the date and location.

“Every retreader has to put a stamp on the tire that tells you who he is and when he retreaded that tire,” explains Tim Miller, commercial tire marketing manager with Goodyear. “If a tire has four retread brands on the sidewall, you know it’s been retreaded four times and that’s a good indication the casing did a good job for you.”
Many single-truck owner/operators and small fleet managers remain wary of retreads, but often their fears are based on outdated or inaccurate information. The retreading process has become very sophisticated and modern technology has improved reliability to the point it can be argued retreads are just as reliable as new tires – maybe even more so, Brodsky will argue. Doug Jones, customer engineer support manager for Michelin Americas Truck Tires, points out that tires now represent a trucker’s third highest operating cost after wages and fuel.

“So, somebody’s got to pay attention to your tires,” he reasons.