Even in the tough times the forest industry is currently facing, one B.C. logger hasn’t lost his sense of humour. “I have an idea for your lead in to this story if you’re interested,” says Greg Jacob as we climb over fallen logs and other slash to get an up close and personal look at his company’s new harvester. “I was thinking it could read something like, ‘Getting through the downturn – this logger just has to grin and bear it’,” he jokes. The lead is a good play on words and it does work well for the story as the harvester we are trying to get a look at is a Finnish built Ponsse with the model name, “BEAR.” 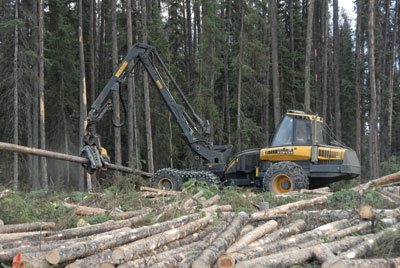 Even in the tough times the forest industry is currently facing

Jacob, who is the president of Lo-Bar Log Transport Co. Ltd. in Prince George, is fairly new to the Ponsse line-up, but after completing careful research he has invested heavily in the company’s equipment over the last year. “We first saw the Ponsse equipment at Forest Expo 2008 in Prince George,” he explains. “Woodland Equipment had just landed the dealership for Ponsse in this area so they asked us if we wanted to set up a woods demo to see the Bear Harvester in action.”

At the time, Lo-Bar’s crews were on a shutdown so Woodland sent the demo harvester to another contractor in the area and Jacob went along for the day, spending some time in the cab with the operator. “I was impressed with what the machine could do,” he explains. “Essentially, it does the work of a feller buncher and a processor with a dangle head, so you are replacing two machines with one.”

Another Look
Although Jacob liked what he saw, he still wasn’t convinced so he went out to Demo 2008 in Halifax for another look before bringing one of the Bear machines to the Prince George area for a 10-day trial. “We brought the machine out to one of our own blocks so that we could see how it would perform in our terrain and with our log profiles, and we put a skilled contractor from Finland in the operator’s seat so that we could see what it was truly capable of doing in terms of production numbers,” he says. “I spent a lot of time in the cab that week and at the end of it, I was content with the risk factor.”

Jacob is no stranger to European equipment and has a large fleet of gear for his cut-to-length operations. He owns three Valmet 890 forwarders that are teamed up with North American made feller bunchers, including a Madill 2250B, a Timberjack 850 and a Tigercat 860. He also runs four Komatsu PC200 processors with Waratah heads and has three John Deere 2054 log loaders that can quickly load up his own fleet of 14 Western Star log trucks and three contract log trucks he uses on a regular basis.

“We were satisfied with the equipment we had but with the type of logging we need to do, moving to the harvester was just a natural progression,” Jacob says. “Because of our growth over the past few years, we needed to add more equipment. We just chose to add a harvester instead of another feller buncher.” 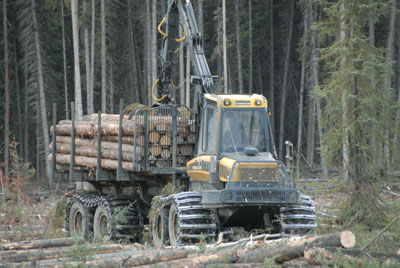 Jacob took delivery of the Bear in October 2008 and at the same time he invested in a Ponsse Elephant forwarder, which is the largest forwarder in the Ponsse line-up at 18 tonnes. It was a good match as the Elephant can keep up with the pace of the Bear due in part to its 6.25 cubic metre bunk, its efficient drive transmission and its powerful hydraulically driven crane.

Another Step
This past September, Jacob went another step forward with Ponsse, acquiring a smaller Ergo harvester and another 18-tonne forwarder – this time a BuffaloKing model. With the four pieces of Ponsse equipment now in his stable, Jacob says they can really evaluate the benefits of going with the harvesters. “This next year is going to give us the information we need to decide if we want to keep going down this route,” Jacob says. “We will have all of the numbers so that we can take a good hard look at production and what effect the Ponsse gear has had on our output.”

So far, Jacob is optimistic. “What it comes down to is what does it cost us to get that cubic metre of wood to the side of the road, and from the analysis I have done so far there appears to be an opportunity to gain efficiency with the harvesters. Those gains will eventually be eroded by our competitors doing the same or similar things, but if I can keep our company in the lead for a few years, that’s great.”

Keeping tabs on the efficiency of the Ponsse equipment is streamlined through the use of Windows-based on-board computer systems that provide daily printouts for a host of functions, including major ones such as volumes, downtime, species breakdown, and fuel consumption in total litres or litres consumed per cubic metre. If the machines were working in an area with cellular phone service, the information could be sent directly to Jacob’s office via a modem. The computer also helps the operator by optimizing logs for price, diameter and length, and can even calculate when the volume of a specific size and diameter needed by the mill has been reached.”

“They have thought of everything,” says Jacob. “The technology removes a lot of the burden from the operator for making those decisions, allowing them to be more productive because they are less taxed. That means they can focus on cutting and sorting the logs to the correct piles.” 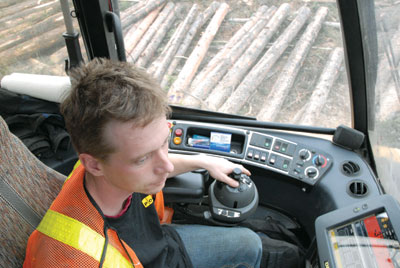 Richard Henderson, who recently moved from operating one of Lo-Bar’s dangle head processors to the Bear, says he is adapting quickly to the new gear. “I’ve been getting better and faster every day,” he says. “It’s a comfortable machine to work in with lots of room and things like satellite radio. And on the production side, the head is fast with lots of power.”

To keep the Ponsse gear in top condition, Jacob hired a Ponsse factory-trained mechanic. Mika Rahkola is a Finnish-Canadian who worked for Ponsse before becoming Lo-Bar’s in-house Ponsse specialist. Jacob says Rahkola knows the machines inside out, and can operate them as well as work on them. He joined three other in-house mechanics who work mainly in the company’s 11,000-square-ft. four bay shop in Prince George.

One of the reasons Jacob started to look at new equipment was to keep up with the substantial growth Lo-Bar has experienced over the past three years. He moved the company from Drayton Valley, Alta., to Prince George back in 2005. Just a year later, he was delivering about 200,000 cubic metres of logs annually to local mills operated by Canadian Forest Products (Canfor). Even with the downturn in the forest industry and the economy in general, he has more than doubled that number since, estimating that he will deliver 430,000 cubic metres in 2010.

“Canfor has indicated that they want their contractors to be ‘right-sized’ and are willing to facilitate that happening,” Jacob explains. “They understand that it is better to have a smaller number of contractors thriving than a large number starving to death. We are seeing changes in the industry that only come along once in a generation and we are seeing something that hasn’t happened in 25 years. In some ways, that’s good for business, but it’s never pleasant. If you are going to survive it, you have to be quick on your feet and you have to be able to roll with the punches. When this is all over, I think the contractors and the licensees that are left will be stronger because of it, they will be leaner, and they will be poised to make the Canadian industry more competitive on a global scale.”

Not Immune
Jacob says Lo-Bar is not immune from the issues facing many loggers. “We have taken our hits as well. We have had rate roll backs and it hasn’t been painless for us. We have had to lay people off and we have had to take downtime. But at the end of the day if we have to go through a major upheaval, I feel fortunate to be partnered with a company like Canfor.”

A saving grace for Lo-Bar has been Canfor’s large pulp business in Prince George. Jacob says the full volume he logs, which is almost entirely beetle kill wood, goes to Canfor’s mills. Most of that is sawlogs for the company’s Prince George area sawmills, but he says Canfor’s chip plant in Prince George has been consuming a huge number of pulp logs to feed the company’s three pulp mills in the area, due in large part to a shortage of sawmill residues as a result of mill closures. “We will send about 170,000 cubic metres to the chip plant this year,” notes Jacob. “That’s almost 35% of our volume and if we didn’t have the pulp mills in town, we probably would have seen our cut reduced by that much.”

Looking forward, Jacob says he sees a small glimmer of hope on the horizon. “I can’t see things getting any worse,” he says. “Looking back at past cycles, it always seems to be the darkest right before the dawn, so I’m hoping that is where we are at. You make investments in new equipment and processes and you hope to see the day when you make your last payment on those
investments.”

While Jacob waits for that day to come on his Ponsse gear, he will be happy just to keep his sense of humour and grin and BEAR it.