Meshtuk Forest Products in Quebec’s Upper North Shore region is one of the few logging contractors in the province that provides complete forestry services, from roadbuilding through to delivering sawlogs to the mill gate.

This may be a key reason why the Savard family has managed to survive the province’s recent forestry crisis. In fact they have emerged even stronger, having moved away from direct dependence on larger pulp companies, something that has made other contractors’ lives so stressful of late.

“In the early 2000s, I felt we had no independence and survived solely by the grace of  one or another large company,” recalls Steve Savard,  the company’s general manager. “When a mill closes, and you depend on it for all your volume, you lose everything. We’ve seen a good deal of that, and it’s not a good way to run a business.”

The story begins in 2001, with the Savard family of the beautiful Charlevoix region northeast of Quebec City. Loggers and foresters for several generations, the Savards decided to start their own logging company. Richard Savard, and two of his sons, Dave and Steve, launched Savard Enterprises, starting with several tracked harvesters suited to the region’s broken, mountainous terrain. In the ensuing years, the family added several more pieces of equipment while branching into other areas of the logging business.

In 2005, Savard Entreprises expanded into new territory, cutting for two seasons for Meshtuk Forest Products, a contractor based further east in Port-Cartier. Two years later, in 2007, the family bought Meshtuk when its four owners decided to retire.

Investing Through the Crisis
As even the province’s largest forest products companies struggled to survive, this growth strategy combined with industry retrenchment has enabled the Savard family to rapidly grow its turnkey contractor model. The aggressive operators have continued to invest millions each year in new logging gear, buying from different suppliers depending on specific needs and equipment availability.

The forestry crisis had yet to erupt in April 2005, yet nothing on the market then or in the coming years indicated that contractors could take advantage of the long period of uncertainty to grow. Most loggers were simply hanging on. As the crisis developed, however, the Savard family had no choice but to change their business model to survive. In fact, a stump-to-dump logging model was almost imposed on the company.

“To get through the forestry crisis, we had no choice but to gather our strengths and evolve into basically a satellite production unit for the mills, taking care of all their forestry needs,” Steve Savard explains. “We saw early on that we had little chance of surviving as strictly harvester operators, and that has indeed been the case. In the end, we were lucky enough to see it coming a year before everyone else, and organized our business accordingly.”

In hindsight, the manager says three elements were essential to keeping the company afloat when so many failed: “It took good equipment, good staff and good financial management.”

Owner-operator
Depending on the season, Meshtuk runs a mix of harvesting sites throughout the upper North Shore, specifically around  Haute-Côte-Nord, Sacré-Coeur, Escoumins, Forestville and Port-Cartier.

The company, which has approximately 75 employees, cuts approximately 250,000 cubic metres of wood each year – spruce, birch, and aspen – in an area known for its rugged terrain and small, short trees. Three separate local sawmills take all of the products.

Meshtuk manages all of the harvesting contract, sharing the work and equipment with Savard Enterprises. “They are two separate companies, but they operate closely with each other on every job,” Savard explained to Canadian Forest Industries on site.

The companies have about 40 forestry machines combined, an unusually high number for the Quebec industry. “Let’s just say the different machinery suppliers know our name by now,” Savard says with a grin. “Often, general contractors in forestry around here deal with several subcontractors to fulfil their contracts, but few own 100% of their own equipment.”

He adds that it has become increasingly important for contractors to run newer gear to remain competitive, as uptime is key given the restricted operating season. “To be profitable you must have 90% new equipment,” the entrepreneur says
All of the company’s tracked CTL harvesters are equipped with Waratah HTH616 harvesting heads, units that are well suited to the wide range of species and sizes the company cuts. A variety of forwarders, including the latest addition, a Cat 584HD 20-tonne unit, bring wood to landing, where the company’s own fleet of trucks and trailers deliver the loads to the three mills.

The ability to control 100% of the operation allows the Savards significant efficiencies and economies of scale, Steve Savard says. “When we just deal with subcontractors, we lose a little margin at each step. Also, our scale allows for some savings, and allows flexibility in managing the different contracts.”

This flexibility allows Meshtuk to quickly make and deliver contracts without having to multiply agreements and paperwork. The company can also more effectively manage its quality systems, and responds more quickly to changing mill requirements. For example, the general manager at Boisaco, Meshtuk’s main softwood client, relies on the contractor to handle larger jobs that need to be done in a hurry.

“If I have a volume of wood that suddenly becomes available for whatever reason, I know they will be able to gain access and get it for me in a hurry. They have all the equipment, which allows them to be more flexible and effective to move to new sites.”

Star Express
Not yet satisfied with the scope of their business, Meshtuk’s owners decided in July 2011 to found a new company to transport their timber to the sawmills. “It allowed us to close the loop,” says Steve Savard. “We had gradually acquired forestry machines for the rest of our operations – all we had left was to be able to ensure the hauling.”

In the early years after acquiring Meshtuk, the partners relied on independent owner/operators for log hauling. It was one less thing to finance and manage, but it was affecting customer service and cash flow.

“With the crisis, there was a shortage of trucks,” says Steve Savard. “We relied on independent carriers, yet were responsible to ensure wood flow to the mills. It was taking about one and a half months between harvest and delivery, and sometimes the availability of trucks was difficult to predict.”

The Savard family took advantage of the synergy created with one of the shareholders, the North Shore Truck Centre, to design custom logging trucks. Steve Savard and Claude Guérin designed trucks that exactly meet the company’s market and transportation needs.

A few months after the launch of Star Express, the first custom-made truck was ready to hit the road. Star Express now has 11 on- and off-road trucks, three of which are autoloaders.

In addition, the two companies have now adapted the construction of their forest roads specifcally with their own trucks in mind.

Having come out of the forest crisis in better shape than before, the Savard family is finally looking ahead at the market with some enthusiasm. In fact, if the current slow recovery continues in the Quebec lumber market, the company has a few more expansion plans up its sleeve.

Light at the end of the tunnel?
With at least half of the province’s small-log sawmills shuttered over the past six years, and volumes down by at least that much, Quebec’s independent logging contractors have arguably seen the toughest times across Canada. Many have left the industry, turning to booming mining or the “Plan Nord” for work.

Yet with U.S. housing looking very solid, area mills are starting to ramp up, and business looks promising for the first time in year. According to an article in Montreal’s major daily La Presse in mid-January, there is at last light.

“Quebec’s wood products sector can at last look ahead at 2013 with optimism,” the analysis suggested. “The main indicators in the U.S. housing market are at last all pointing to a green light as far as lumber demand goes. This time, everything points to some solid growth right through to 2017. Demand is strong for many products, and in some cases (2x6x12), products are becoming hard to get.”

According to the report, the industry will now have to look to investment to renew its production capacity and take full advantage of the recovery. 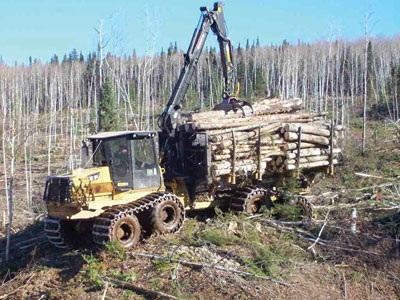