This year, as Groupe de Scierie GDS celebrates its 75th anniversary, it completed one of the largest investment phases in its history. 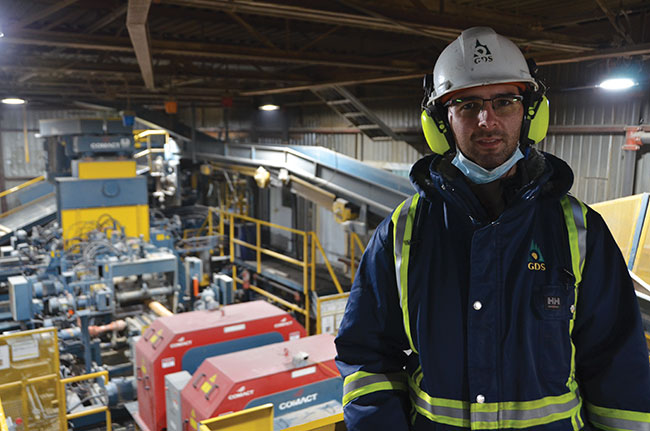 ABOVE: Edi Savard was hired as manager of the Grande-Vallée plant 11 years ago, when he was just 24 years old. Photo: Annex Business Media.

According to Groupe de Scierie GDS president Sylvain Deschenes, the group invested a total of $66 million in the past three years in its three sawmills, as well as its planing mill and its new pellet plant.

The Grande-Vallée facility investment alone accounted for $8.4 million, most of which ($7.2 million) was invested in the saw line, which included a new EBI Electric optimization and control system and a Comact multiple saw edger. Other items acquired included a grading optimizer, a weeder supplied by Samuel Packaging, as well as new DK Spec heads for the canter and edger.

“But the biggest gains we have made are on the waste front. The mountainous and arid terrain in the Gaspé region, where we operate, produces a lot of wood with flaws. Our 3D optimization and curved sawing equipment have considerably reduced wood consumption and added consistency.”

Efficiencies have also increased, says Georges Deschenes, the company’s vice-president of operations. “We can now better optimize the value of our basket of products.”

Indeed, all of Groupe de Scierie GDS’s installations have now been modernized. These include an $11.5-million investment in its Marsoui sawmill, most of which was targeted toward a Comact and EBI Electric sawmill line output optimization equipment and a new Carbotech trimmer.

An additional $4.2 million was invested in its Pointe-à-la-Croix sawmill’s optimization and control capabilities, once again through EBI Electric.

Groupe de Scierie GDS officials say that using similar suppliers at all three factories made it possible to better generate synergies, through the sharing of best practices.

“This enabled standardization, which led to a reduction in spare parts inventories,” says Sylvain.

“These investments have improved overall plant productivity. “We already had a very good yield, around 3.7 cubic meters per 1,000 feet. We are aiming to go down to 3.3. For the moment, this objective has not been achieved. But the figures have already improved.”

Groupe de Scierie GDS officials are particularly happy to have made the investments early – prior to the recent rise in lumber prices. This enabled the company to capitalize more fully on those investments.

“Our long-term performance has enabled us to get through many through years,” says Sylvain.

Approximately 200 million board feet from the three Groupe de Scierie GDS plants is dried and planed each year at the Matane plant, which benefitted from $18.2 million in new investments. This equates to roughly 85 per cent of production. The balance is sold in the form of recently cut green wood.

Staff at the Matane facility also carried out research and development on a high-frequency microwave dryer, in partnership with Hydro-Québec, FPInnovations and MEC Dryer.

“The project aims to standardize wood drying quality,” explains Sylvain. “That is important to us because we process a lot of fir. The boards pass over an 80-foot-long apron for 10 to 15 minutes, before being analyzed by an optical reader. If the wood is dry, it will go into a box, otherwise it goes back into the microwave dryer.”

Groupe de Scierie GDS has also invested more than $2 million in a smart planer research project, through a partnership with Produits Gilbert and FPInnovations. A Rodrigue Metal dust collector, valued at $1 million, was also installed.

The group is also planning to install a Carbotech packaging and stacking equipment, valued at $5.3 million, in April next year.

“We want to minimize human intervention by better leveraging optical readers and artificial intelligence to help improve product quality,” explains Sylvain. “We are going to double the packaging and stacking line to avoid stoppages if a component breaks.” 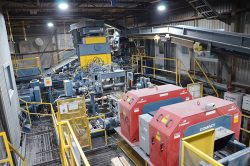 Major investments were made in collaboration with Comact and EBI Electric on the Grande-Vallée sawing line. Photo: Annex Business Media.

According to Georges, future Groupe de Scierie GDS investments will be increasingly dictated by a growing lack of manpower in Quebec’s forestry sector. Like many in the industry, the company is constantly on the lookout for specialized talent, particularly for its Matane and Marsoui plants. “We have changed the way we think,” he notes. “We are increasingly forced to cut labour inputs and increase equipment investments to compensate for a shortage of people.”

That said, Georges admits Groupe de Scierie GDS remains in a relatively good position, in part because the company, which employs nearly 200 people, has maintained talent by continuing to operate throughout the pandemic.

The group also recently hired a person who will be dedicated to international recruitment so the company can run and maintain dual shift operations.

More wood from the mainland

Replacement harvests are now conducted amidst spruce and budworm wood rights auctioned from more accessible private lands and sent to the company’s Grande-Vallée plant that processes 200,000 cubic meters per year.

Similarly, the Marsoui and Pointe-à-la-Croix facilities’ output approximately total 200,000 cubic meters per year, consisting of about 65 per cent fir and 35 per cent black spruce.

About half of the wood Groupe de Scierie GDS processes originates from supply guarantees. Given the diversity of the company’s wood sources, the protection of woodland caribou habitats – a major issue in northern Quebec – is not expected to unduly encroach on plant volumes.

However, company officials worry that its Marsoui operations could be vulnerable. Half of the wood is sold in Canada and the rest in the U.S. The company maintains strict traceability and a sales history just in case restrictions are one day applied. 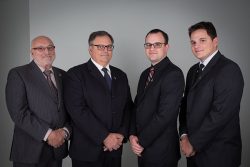 Groupe de Scierie GDS is a family business that spans four generations. The grandfather, also named Georges Deschenes, opened the first hardwood mill in Dégelis in 1947. Succeeding generations of the Deschenes family gradually integrated into the company, a process that started with Guildo Deschenes, continuing on with Sylvain and more recently, Georges and Frédéric.

The Deschenes family, which appears to have entrepreneurship in its blood, has operated a range of businesses over the years. These include a wood harvesting operation in Maine, and a cedar processing facility. In the 1980s the Pointe-à-la-Croix sawmill was acquired. The Marsoui, Grande-Vallée and Matane sawmills were added in the 1990s.

By the mid-2000s, Groupe de Scierie GDS had 15 factories in the Gaspésie, Bas-Saint-Laurent, and the Côte-Nord regions. The wood crisis at the end of the 2000s forced the company to restructure operations. This led to the abandonment of cedar processing and the streamlining of activities into three sawmills and the planing facility.

This year, as Groupe de Scierie GDS celebrates its 75th anniversary, it completed one of the largest investment phases in its history. The company recently improved its sustainability profile by building a pellet plant that should enable it to market the by-products produced at the plants.