The local hardware store in Cobble Hill, B.C. has sure grown over the years. Started in May 1959 by Ken McKinnon and five partners, Pacific Builder’s Supplies was a one-stop shop for building materials in this Vancouver Island community located halfway between the major centres of Nanaimo and Victoria. 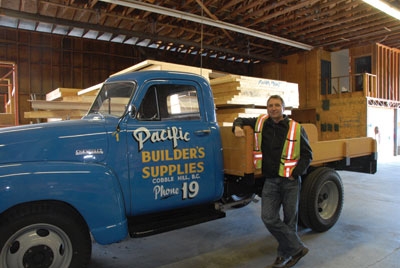 Grant McKinnon with the company’s original delivery truck from the early 1950s. The local hardware store in Cobble Hill

Today, the family-owned company has six divisions under the umbrella of  “Pacific Building Systems” and sells products in the local market and around the globe. Pacific Building Systems’ products include trusses, factory built custom homes, turn key commercial and institutional structures, and building and DIY materials through four Rona retail stores it operates on Vancouver Island.

“We just had our 51st anniversary,” says Gant McKinnon, Ken’s son who runs the company today with his brother Wayne. “When Dad got into the business we were strictly a building supply store. He started out with several partners but he bought them out and went on by himself.”

Ken first diversified in the early 1970s when he opened the first truss plant on Vancouver Island before moving into the factory home business in the early 1980s. That’s when he started building pre-fabricated homes, primarily for First Nations communities, says Grant.

On the retail front, they really didn’t expand until the mid 1990s when a Beaver Lumber store in nearby Duncan was shutting down. “We were offered the store so we took it over and reflagged our Cobble Hill store as Beaver as well,” recalls Grant. “We acquired a couple of additional stores in Nanaimo and then Beaver was sold to Home Hardware. We operated under Home Hardware for five years and then saw a great opportunity to become a Rona dealer as they expanded to Western Canada.”

Today, the company’s Duncan Pacific Builders Supplies division has the Cobble Hill store, which was rebuilt three years ago, one store in Duncan that was built two years ago,  one in Nanaimo which opened last year, and a store in Campbell River.  “Rona is in tune with our philosophy of servicing builders as well as the DIY market and they are typically mid-sized box stores in the 25,000 to 60,000 square ft. range, which fits our profile,” says Grant.

The company’s other divisions include: Pacific Truss, which is in Cobble Hill and produces roof systems for the local Vancouver Island market as well as for other parts of B.C. and the United States; Truline Truss in Creston, B.C., which focuses on truss and floor packages for the local southeastern B.C. market and the Northwest United States; and Pacific Homes, which is located on the same site as Pacific Truss, and produces high quality, factory built custom homes for the domestic and export markets. Canarc Construction is the company’s turnkey commercial and institutional building division and they also have a residential and commercial land development division.

The truss side of the business has experienced substantial growth over the years and “Pacific Truss is probably one of the most thought-out truss plants in the industry in terms of flow,” says Grant. “We have been producing trusses in Cobble Hill for 40 years but we rebuilt the truss plant from the ground up in 2003.” 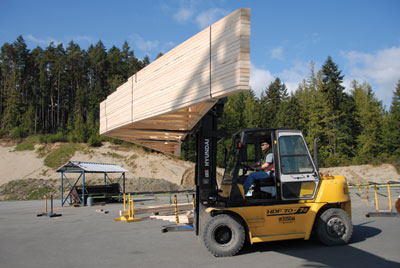 That rebuild included a Pacific Automation Gantry Table featuring screen projection above the work area that directs the plant’s workers when assembling the trusses. All of the components are cut to specifications calculated by a sophisticated computer system that passes the information on to an Alpine high-speed linear saw. The cut components are then transferred to the Gantry table where perimeter “pucks” move on the table to match what is on the screen. The workers simply place the wood components into the jig that is created by the pucks and then assemble the trusses. The final step is to press the assembled trusses, which is done as the trusses roll off the gantry table.

When it comes to the Pacific Homes, computers also play a major role at the Cobble Hill plant. The homes are computer designed and that information is sent to the truss plant and the wall plant where all of the wall components are cut with a Mitek Laser MC. The walls are then assembled with a jig in a similar process to what happens in the truss production plant. The finished packages include all components of the home to the lock-up stage, including the exterior and interior walls, exterior and interior doors, windows, siding, trusses, roofing materials, and drywall. Even the nails are included and the homes can be ordered with the company’s proprietary “Smart Wall System” which was tested at the British Columbia Institute of Technology (BCIT). When compared to traditional walls found in home construction, Smart Walls feature improved thermal efficiency, better sound insulation, and additional health benefits.

The homes are shipped all over the world and markets range from the traditional mainstays for Canadian wood products such as the U.S. and Japan, to new and emerging markets like Chile and Mongolia (see sidebar on Mongolia). “Our very first export market was Japan, says Grant. “We were the first company with a JAS stamp.  Today, when we look at marketing, we look at the emerging markets that are not so tied down in red tape and maybe have an emerging middle class.”

Finding new and emerging markets and refocusing on the Canadian market have been key for Pacific Homes with the downturn in the U.S. market. “The slowdown in the U.S. has caused us to focus back on the Canadian market,” explains Grant. “Our home sales have always been strong on Vancouver Island, but we are now looking at other areas of B.C. and Canada, and of course the international market.”

As for China, which is frequently at the forefront of discussions on export markets for B.C. wood products, Grant says “there is definitely a portion of the population in China that wants the status of having a home made with Canadian wood,” but he cautions, “they don’t have the land in China’s major cities for single family homes and that is what we produce.” However, he says they do see a market in China for the company’s trusses as wood trusses are proving popular for both new apartment projects and renovations to existing apartment buildings requiring new roofs.

Grant is no stranger to the export side of the business and in addition to marketing Pacific Building Systems’ own products outside of Canada, he is the chair of BC Wood, which is a not-for-profit trade association that has represented B.C.’s value-added wood products industry in both Canada and abroad for over 20 years. He says the company is also involved with Canada Mortgage and Housing Corporation (CMHC) and B.C.’s Forestry Innovation Investment (FII) when it comes to export marketing.

Although Grant concedes the U.S. slowdown has been challenging for the company, he says right now they are doing well and keeping about 300 people directly employed. “Of course, we would always like to increase our market share, but we have a good group of employees who care about what they are doing, we produce an excellent line of products, and we are diversified enough in our markets that we are in good balance.”