Les Granules LG (LG Pellets) in St. Félicien, QC, has the wind in its sails, and it’s a warm wind at that, thanks to the energy and market potential of Canadian wood fibre. The company some five hours northeast of Montreal makes wood energy pellets from planer shavings, and thanks to growing western interest in renewable fuels, it has been selling product for over a year now in Italy in addition to its traditional markets in Quebec, Ontario and the Maritimes. 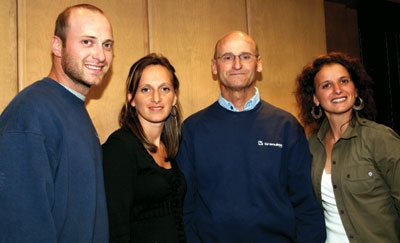 That’s just a start. The company had $16 million in turnover in 2006 from a production of 78,000 tonnes in wood pellets, and management would like to see that, and its European presence grow this year. The target for 2007 is 100,000 tonnes, of which 40,000 is slated for the overseas market.
The company was founded in 1995 by Laurent Lamontagne, who at the time was a partner in Lamontagne Sawmills in nearby St. Prime and wanted to diversify. He added a planing operation, and then the pellet side, although it was not as easy as it sounds.

The new mill was built on the site of an old butcher operation.

“We worked like crazy during the first three years to make it work,” Lamontagne recalls. “Then on top of it, there was a fire in 1997 that destroyed the warehouse and a good part of the mill, and we had to start over.” During the first year, the operation made a grand total of 4,500 tonnes of pellets, and even two years later production was only at 10,000 tonnes. Now they are targeting 10 times that amount.

Fibre Basket
The area is well known for its sawmills and sawmilling innovation, so planer shavings at least until recently have been readily available. That’s good, since more than 2,200 tonnes of dry planer shavings are required per week, coming from a half dozen local sawmills. Currently, the uncertain state of Quebec’s lumber industry is making the folks at LG Pellets a little uneasy.

“Our number one challenge right now is fibre,” says company controller Ken Saint-Gelais. “It’s even worse than it was five or six years ago, when we thought things were tight. We have agreements in place with a handful of suppliers, but with all the mergers and closures, we can see one day dealing with only one.”

The 15,000-ft2 facility employs roughly 20 people full time, with two foremen and two mechanics completing the team. Most of the training is done in house with the help of suppliers for some specialized equipment from Europe (Andritz), America (Bliss), or Canada (BM&M). In addition, a good deal of training was supplied by Gaston Richard Inc., eastern Canadian distributor for Bliss and BM&M based in Saint-Julie, QC. Maintenance on all gear is managed using Interal software.

Heat & Press
The pellet-making process is fairly straightforward. Raw material is transported by truck to two storage facilities nearby the mill, where a loader then feeds it to the mill infeed system. Here an auger drives material to a BM&M screen to remove foreign material or wood chips that are too large for the process. 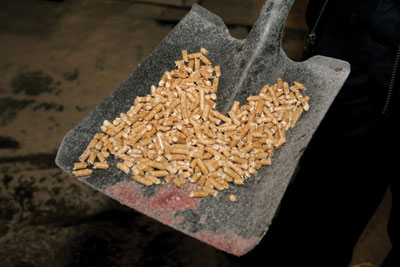 Accepts go to a Bliss hammer mill to be reduced, with the refined material heading to a Bliss cooling system. The mill uses three presses: One from Andritz installed at startup, and supplied across Canada by Quebec-based Law-Marot, and two Pioneer (Bliss) machines added in 2005 and 2006, each 400 hp units. A third Bliss unit was added recently.

There are no additives in the process. The heat injected into the wood fibre and the high pressures (to 30,000 psi) activate the lignin, which then acts like both binding and lubricating agent to help form and maintain the pellet shape after the pressing. The super-heated pellets are then sent to another Bliss cooling station, followed by a second BM&M vibrating screen to remove residual dust. 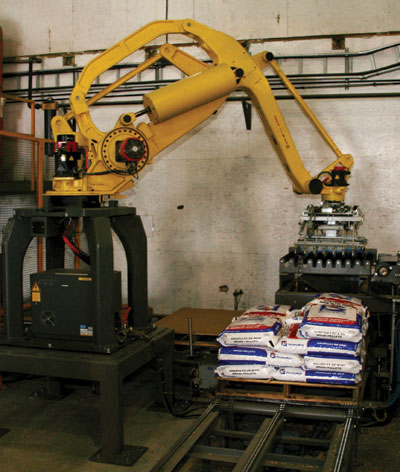 The final step is bagging and palletizing the pellets. The entire packaging line was designed by Premier Tech  Systems of Rivière-du-Loup, QC. Installed in 2001, it produces 20 of the 40-lb bags per minute. Also, in 2006 the mill installed an AR-200 robotic palletizer, automated shipping technology developed by Premier Tech in 2003.

Dust control and transport systems include a recently installed multi-cyclone filtration system from Concept Air, a Quebec-based company that has done other work for the plant. The process also includes strategically placed industrial magnets to remove tramp metal as well as help avoid fires through the plant.

Pellets are sold in 40-lb bags in Ontario, Quebec and the Maritimes by such distributors as Rona, BMR, Sodisco, ILDC, and Federated Co-op. For the European market, 18-kg bags are shipped in containers from the Port of Montreal. The company also makes horse litter, a popular product that also provides an outlet for rejects from the main pellet line. More expensive than traditional sawdust, it nonetheless has a market among the wealthy hobby stables of Colorado and other modern cowboy states.

Too many pellets?
For the first time in its existence, LG Pellets is faced with a possible surplus of its bagged pellets, in the order of 17%. According to Ken Saint-Gelais, increasingly mild weather is the main culprit, since their product is used for residential heating. “Faced with that, we have two options – Reduce our capacity or increase our marketing efforts in Europe. We’ve chosen the latter, and we’re being helped by the established trend toward green energy overseas.”

For the past year, the company has been targeting Europe, or more precisely, Italy. When you think wood stoves, you may not think sunny, warm Italy. LG Pellets does. “There is significant potential for us there,” Saint-Gelais says. “The Italian government is subsidizing consumers who heat with wood pellets, so it’s a growing market.”

Company founder Lamontagne agrees with this diversification scheme. “We also plan on exporting to other European countries and are already developing the business relationships to get things moving. We foresee exporting some 40,000 tonnes this year alone.”

While many in today’s industry see diversification into the biomass business as a path back to profitability, Saint-Gelais has a word of caution. There may be room for biomass-based businesses using forest slash or construction debris, but when it comes to sawmill residues in Quebec, the supply is more than spoken for. This perspective is shared by those who have analyzed the existing utilization of wood residues in Canada, including the Canadian Forest Service.

“I heard lots of this talk at a recent bioenergy conference in Val d’Or (western Quebec). Still, you can’t talk about an excess of raw material where sawmill residues are concerned.”

In fact, LG Pellets, along with the two other major pellet manufacturers in Quebec, Energex in Lac Mégantic and Lauzon Bois Énergétique Recyclé in Papineauville, presented  a paper at the Val d’Or conference explaining the fibre flow realities, and the likely effects of the recent sawmill slowdown and 20% cut in AAC by the Government of Quebec.

“We don’t see this as the antidote to the forestry crisis in Quebec,” Saint-Gelais concludes.

For the future, management at LG Pellets wants to keep pushing the envelope as far as production and automation go. “We have the capacity to put out 120,000 tonnes/year,” says Lamontagne. “Right now we’re at about 78,000 tonnes, and we definitely plan on pushing that to full capacity.”

Martine Frigon is a forestry writer based in Quebec City.